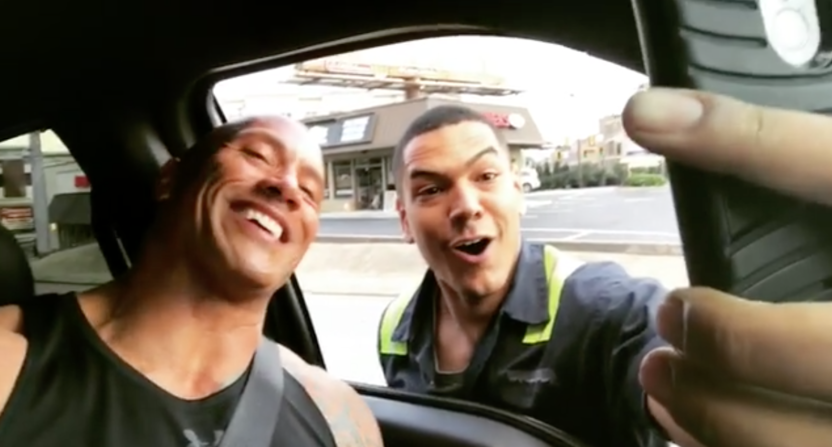 Anyone who has come across a celebrity in public has been forced to balance a desire to seem cool and an instinct to totally freak out.

Unless you’re the guy who came across Dwayne Johnson on Tuesday, in which case you just go all-in on the freakout.

The Rock shared a video to Instagram of his mid-road encounter with the excited fan, who apparently got out of his truck to snap a selfie.

Yeah but sometimes traffic is just gonna have to wait to make fans happy ? I was driving in my pick up truck after work and my guy here pulled up beside me, recognized me and started freaking out. I rolled the passenger window down to say hello and then he REALLY freaked out. Jumped out of his rig and came around to my side where he stood in the oncoming traffic lane. He said, “Holy shit Rock you’re my hero, can I take a picture with you?” I said yeah man but let’s pull over to the side and .. before I could even finish he was gone like a flash, “Hold on let me get my phone”.. The light’s turned green and now cars are coming towards him and driving around him. Not one car was beeping their horn because I’m sure they thought some road rage was going down. No rage, just some big, brown, bald tattooed man in his pick up truck taking selfies in traffic. This dude put a grateful smile on my face and got a big ass laugh outta me as well. Besides the traffic jam we caused and his ass almost getting hit by oncoming traffic, making fans like this happy will always be the best part of fame. Thanks dude for making my day. ?? #INeedDarkerWindowTint #GreatestFansInTheWorld

In the caption of the Instagram post, Johnson explained that he had rolled down his window to say hi to the fawning fan, who then abandoned his truck, causing a traffic jam, and raced over for a picture. He was then utterly unable to speak in the presence of his hero, stuttering and gasping for air as he took the photos.

It’s this kind of interaction that fuels the persistent speculation that Johnson could run for president. People just love the guy, and he seems to love them back. As Caity Weaver wrote in her recent profile of The Rock for GQ, “For Johnson, there are no strangers; there are simply best friends, and best friends he hasn’t met yet.”

As Johnson said in the video, “I got the greatest fans in the world. … And the fucking craziest.” And as he wrote in the caption, “#INeedDarkerWindowTint.”