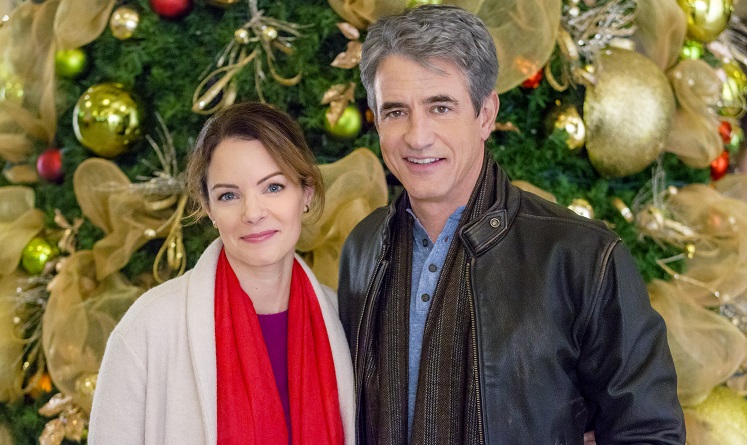 Hallmark’s Countdown to Christmas started on Oct. 28. Some of you may be saying “That’s before Halloween, let alone Thanksgiving! It’s too early!” To that, I say “Don’t you bah humbug the greatest Christmas cultural event this country has!

This is the tie that binds your generally disparate family members together! This is the channel you can all leave on in the background to emulate as happy family get-togethers, even though yours may be a little more fraught because families are hard, y’all!”

This year’s Countdown to Christmas means 21 (!!) all new Hallmark holiday movie premieres. Twenty-one. That is 42 hours of run-time watching perfectly G-rated, tied up with a bow, Hallmark movies over the next eight weeks on Hallmark Channel. *Jumps up and down* or *Shaq wiggle gif* AND that doesn’t even count the 12 separate all-new premieres on the Hallmark Movies and Mysteries channel, a channel where the movies veer into *gasp* PG instead of G. (This means there is precisely one more kiss before the end credits than there is in a regular Hallmark Channel movie.)

In addition to the new movies, the Hallmark properties have switched their programming entirely to reruns of their holiday movies. I am sorry if you’re missing the reruns of Golden Girls and Frasier. (My husband is certainly missing the latter.) They’ll be back after the holidays, when I’ll enter a deep winter depression because there isn’t any more Christmas cheer going around.

So how do we quantify which perfectly predictable, saccharine sweet Hallmark Holiday movie is THE MOST Hallmark of all the Hallmark movies?

Well, a couple years ago, due to my fascination with this high art, I made bingo cards just for this occasion! Two versions even! They are online and fully accessible for you to use for your own purposes, here and here. (The cards randomize each time you open it, making achieving bingo a bit more difficult, and allows you to play online so you can screenshot it and send it to me.) I filled the cards with your standard Hallmark Holiday movie tropes and with some minor things I’ve picked up from watching way (way, way, way) too many of these movies.

Creating the bingo cards is both really easy (these movies are, of course, all filmed in Canada due to generous tax benefits making production less expensive, meaning the bingo square of “Canada stands in for expensive U.S. locale” is almost automatic) and really difficult.

Which combination of busy career gal/carefree guy or vice versa are we going to get? I could even specify by profession. Chances that the female lead is an interior designer, lawyer, photographer, or veterinarian are pretty high. The guys own tree farms or family inns where our lady protagonist visits to rediscover herself. But that’s a little hard to put into a bingo square.

Will we get Winnie Cooper from The Wonder Years as our star, or Lacey Chabert from Mean Girls, and if you’ve been around for awhile, Party of Five? Which Canadian lead male will you get? Brennan Elliott or Andrew Walker?

Despite being so predictable that you can create a bingo square from them, these movies are the personification of the joy and happiness of the holidays. Nothing truly bad happens in Hallmark Christmas world. Even the dead parent trope, which allows our lead to interact with a precocious child whose living parent is available as a romantic interest, hasn’t left everyone scarred, but well-adjusted and open to new possibilities.

There is no deep and abiding sadness in Hallmark Christmas. There are skating dates and hot chocolate and Christmas carols and opening presents. Conflict is minor and even when a breakup needs to happen, the couple breaking up understands it’s for the best and there’s no crying into your ice cream while listening to an Adele montage, like there would be in real life.

There are puppies and mystical Saint Nick types to set you on your path. There are thematic town and character names. There is more ice sculpting than I’ve ever seen or experienced in real life as this season’s Christmas Festival of Ice joins Ice Sculpture Christmas from a few years back. (As I mentioned when I first wrote about Hallmark movies, I remain fascinated with the entire production of them, in particular the script writing. Why go to the ice sculpture well twice in three years?)

This Christmas, we’re getting a Hallmark Hall of Fame movie, the premier anthology that can draw slightly bigger names and has even won Emmys in the past.

This time, it’s Dermot Mulroney (not Dylan McDermott), Kimberly Williams-Paisley, and Danny Glover as the top billed cast in The Christmas Train. The always-funny Joan Cusack is also in the cast and is the real draw for me. It’s adapted from a David Baldacci novel, a writer in the John Grisham vein, switching from legal/political thrillers to holiday-themed fare. Because this is in the Hall of Fame, the subject matter may be a little more sensitive and complicated than the standard Hallmark movies starring 90s/early aughts television stars.

But what will hold with all of these movies, Hall of Fame or not, is that they are family-friendly. I know families who may be on opposite ends of the political, socio-economic, life choices spectrum that leave these movies on in the background to bond over.

If you have a teenage cousin you don’t have anything to talk about with, if you don’t want to engage your dad on the state of the world, if you don’t want to root for the team only your Uncle Dave likes, you can all half-watch Hallmark Countdown to Christmas movies and know that no one is going to get in a fight over anything that happens in happy, perfect, Hallmark winter wonderland.