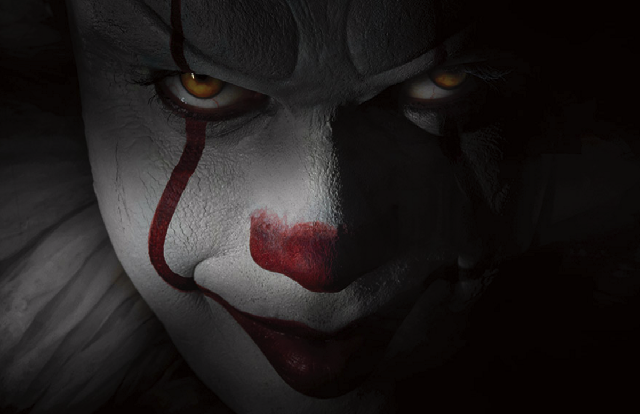 America can’t wait to see a movie about a killer clown.

One of the most eagerly anticipated films of the year is a little over two weeks away. It, based on the Stephen King classic horror book, will be released Sept. 8. When the first trailer debuted in March, it set a record with 197 million views in 24 hours. The movie is expected to exceed a $50 million opening, which would be a godsend for what has been a disappointing summer for the box office.

There are high hopes that this version of It will be a vast improvement of the 1990 television movie that ran over two nights on ABC. The trailer looks promising and this film won’t be limited by the restrictions of network television.

“I’m every nightmare you’ve ever had. I’m your worst dream come true. I’m everything you ever were afraid of.” – Pennywise

Coulrophobia – the fear of clowns – is a modern phobia. For over a century, clowns were usually associated with happiness, bringing joy to kids of all ages. Ronald McDonald, the bright colored spokesperson for McDonald’s restaurants, made you want to happily munch on hamburgers and fries. Bozo the Clown delighted many with his children’s television show. There was nothing creepy.

Sure, you had the Joker, nemesis of Batman. He first appeared in the 1940s and was introduced to a broader audience through the Batman TV show of the 1960s. But the Joker existed in the world of comic book folklore. Superheroes needed supervillains. For many, the Joker didn’t seem particularly threatening or scary to a child.

No one really saw clowns as evil until John Wayne Gacy. America witnessed a real-life horror in 1978 when Gacy was arrested for murdering over 30 teenage boys and young men in Illinois. What made the story particularly terrifying was one particular detail: Gacy was nicknamed the Killer Clown because prior to his capture, he appeared as Pogo the Clown at birthday parties and charitable functions.

Gacy’s crimes were the inspiration for the scariest fictional clown of them all: Pennywise, the antagonist in Stephen King’s It. It’s not hyperbole to suggest that It might be responsible for coulrophobia. Pennywise certainly popularized the fear to the point where many adults gaze at clowns with slight suspicion. Heck, last fall, we had the Great Clown Scare of 2016.

Blame It – a movie about a homicidal clown that preys upon small children in small-town America. That seems real. That seems as terrifying as John Wayne Gacy.

When news first spread that there would be a new movie based on the book, there wasn’t the usual blowback Hollywood gets when an idea is recycled. It was mostly embraced by fans of the book – particularly those left unsatisfied by the 1990 version. This was an idea that needed to be rebooted. A movie critic once argued that if studios are going to do remakes, why not focus on fixing bad films. Make a second attempt on movies that didn’t quite work.

The original It falls into the didn’t-quite-work category. Rotten Tomatoes rates It at a 62 percent critic score and 64 audience. That’s about right, because there are many things to like about 1990’s It. The two-part movie is 193 minutes long and was shown over two days. The first half of the film works well. The second half is where it falls off the rails.

The best thing about It is the performance of Tim Curry as Pennywise. You can’t sell the movie without a scary clown. Curry’s approach was frightening. He didn’t track you down or hunt you in the conventional way of most monster movies. Curry’s Pennywise preferred to lure in his prey, taunt and then pounce. That’s what makes this famous storm drain scene work so well.

Curry plays Pennywise as an interesting mix of scary and funny. But you never lose sight that he is evil through and through. This, along with his work in The Rocky Horror Picture Show, are probably Curry’s two most famous roles.

The library scene is a nice blend of Curry’s menace and mockery.

The other good thing about the original It are the kids. They are all believable characters who are battling not just Pennywise but school bullies and less than supportive parents. All the kids have inner demons they’re confronting. For example, one has a stutter, one has asthma, another is overweight, etc.

I sincerely hope the child actors from the 1990 "IT" go see the new movie together. pic.twitter.com/zPZGMny7Ip

The driving force of the entire movie is Bill’s guilt over his unintentional role in the death of his younger brother. He wants revenge and rallies his friends to confront Pennywise as children and then later as adults.

The combination of Pennywise and the kids is enough to make a good movie. In fact, that’s what the remake is focusing on.

The problem with the original TV version is that it often gets in its own way. It is clunky and has too many unnecessary scenes. (This movie could have been wrapped up in under three hours.) The biggest issue is that the characters aren’t as interesting once they grow up.

The adults are characters you don’t really care about. They are as deep as cardboard cutouts. Bill the Child is grief-stricken, but brave and complex. Bill the Adult just seems sad and pathetic. The rest of the adults also get on your nerves. The lone exception is Beverly Marsh, who after being raised by an abusive father, gets into an abusive romantic relationship.

When the adults meet Pennywise for the final confrontation, the climax is something out of Plan 9 from Outer Space. Not only does it feature some of the least scary moments of the film, but it’s B-movie bad. You’re left wondering if the director ran out of material and cobbled bits and pieces together to manufacture an ending.

The 1990 It could have and should have been better. Some people still like it, but that’s nostalgia. They are looking at the original through a child’s eyes. It’s a mediocre film that had a promising beginning and a really bad ending. What does stand the test of time? Curry as Pennywise.

It will be interesting to see how Bill Skarsgård portrays Pennywise in the new movie. Perhaps he’ll bring more nuance and terror and leave the jokes behind – almost like how Heath Ledger brought something new to the Joker versus Jack Nicholson’s portrayal.

If you haven’t seen the original It, you can catch it on iTunes or Amazon. Then see the remake and make your own judgment.

And remember: “We all float down here.”