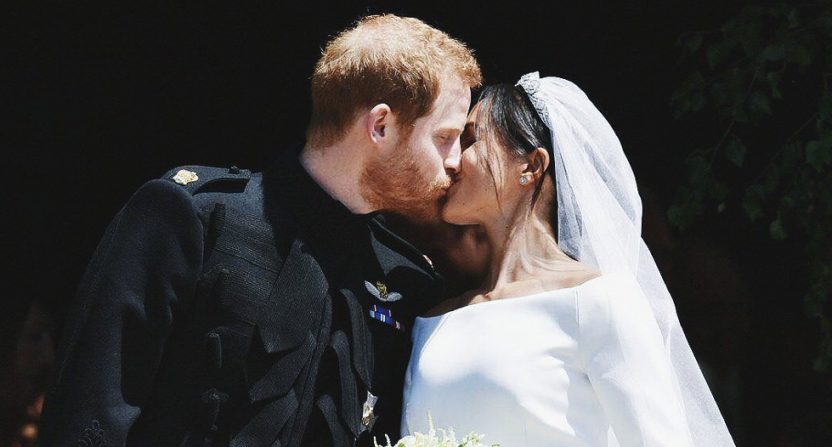 A beautiful, divorced, not terribly young, American, biracial actress married an unemployed man on Saturday in England, and I stayed up all night to watch their wedding. It may be 250 years later, but we’re coming to take over, England. We’re gonna colonize YOU. (A caveat: this event is not for everyone. And it is not about pointing out the horrible things the British have done or why monarchy is problematic. This is about two people who love each other, by circumstance, having a big public wedding and us enjoying that spectacle and celebrating their love.)

Meghan Markel, now Meghan, Duchess of Sussex, planned (with a coterie of professional help) in six months a wedding for 600 people. Having planned my own wedding, which led me to state that I would much rather have to take the bar exam again rather than plan another wedding, this is a miracle. Not only that, over a billion eyes were on her. I can’t begin to imagine the pressure and choosing to now live your life in this fishbowl and to give up your hard-won career to do so. But the hot ginger prince didn’t choose me so…I don’t have to imagine it. Meghan, Duchess of Sussex, did it Saturday, flawlessly. I salute her. Here are some things that stood out from the wedding and how it was covered.

1. The BBC had the best coverage. Since I started watching around 1 a.m. Pacific, CNN was pretty much my only option. It was…fine. I watched five seconds of NBC when they started their broadcast, only to discover Al Roker screeching, so I flipped to ABC.

Then I discovered BBC America. They had the advantage of better camera angles and knowing what they were talking about. American channels were like, “So, people like tea here?” BBC, “The second husband of the Duchess of Canterbury will be sat to the immediate right of…” It was higher quality by a mile and if you’re going to watch a replay, head there.

2. The family angle. Meghan’s half-siblings could best be described as having difficult circumstances and are more accurately described as money-grubbing trash trying to make a quick buck off a sister they barely know. They have not passed up on a single opportunity to talk to TMZ or the Daily Mail. Having my own family meltdowns just before my wedding, I do not feel charitably towards them. The one who does deserve a bit of empathy is Meghan’s father. He was coming to the wedding to walk his daughter down the aisle. Then he wasn’t. Then he was again. But then he couldn’t due to a medical condition. This has to be hard on all of them. Meghan handled it with aplomb. That’s her role now: handle difficult issues with aplomb. Still, being gracious the days leading up to a wedding is…not something I was good at. I applaud her.

However, not a single channel would shut up about how hard and disappointing and terrible this was. One twat British guy said to Robin Roberts of ABC, “It’s just so sad. It should be a happy family occasion and from Meghan’s family, only her mother is here.” Roberts was quick to retort, “Family isn’t always about blood.” YOU GO, ROBIN! Family is what you make it and judging by the Clooneys and Serena Williams and the cast of Suits, Meghan has a brilliant and supportive circle that has nothing to do with blood. Trying to draw the sadness out on a happy day is so unfortunate and I wish there had been far less focus on that angle.

3. Preacher man. As a repressed, uptight, unemotional Irish Catholic, I am used to my homily being some non-emotional nonsense that I’m barely paying attention to. I imagine this is not far removed from Anglicans and what those gathered were expecting from ceremony for Meghan and Harry. Instead they got fiery American bishop Michael Curry of the Episcopal Church speaking on, well, actual Christian principles of being open to love in all forms.

This was…wildly more emotive than the Brits were at all comfortable with…just look at Harry’s cousin Zara’s face.

HERE IS A GIF OF ZARA'S FACE AT THE PREACHER YOU'RE WELCOME BRITAIN #RoyalWedding pic.twitter.com/ZxpKpqRECR

Not only that but Twitter gave the impression that this was far lengthier than the “pip pip, cheerio, good luck!” address that is usually given in that slot. They would not shut up about how it was taking too long. Without paying attention to the message at all, which just seems so blindingly tone-deaf from the peanut gallery.

4. The cloooothhheess. How does everyone find such perfect well-tailored finery? I mean, the answer is you aren’t at this thing if you aren’t also wealthy AF. But still! Everyone looked just brilliant. Amal:

(Well played on the caption, Guardian.)

This was a fashion feast for the eyes. Victoria Beckham was underwhelming and I saw one lady teetering on her shoes, but other than that, everyone looked out of this world. I will spend the next few days obsessing over hats alone.

5. Pageantry! It is a failing of the US and our love of our military that for whatever reason we do not have ridiculously outfitted cavalry units that do precision riding. I feel like we should kick ass at this. Alas. We let the British outdo us. Meghan and Harry took to a carriage and were escorted on a 4+ mile circuit around Windsor Castle by an escort from the Household Cavalry Mounted Regiment. It was…what our current idiot overlord wishes he was.

6. Meghan’s whole look. I genuinely am going to be excited to buy boat neck everything, a trend she will set off by her neckline choice for her dress.

The most beautiful bride! See Meghan Markle's dress (and that tiara!) from every angle. #RoyalWedding pic.twitter.com/4WK7ubFXS9

And I’m also genuinely jealous that when I was wedding dress shopping they were like “No. Sleeveless. That’s your only option” and I did not push back on this. Because Meghan was understated and also gorgeous and was wearing a tiara and a train the length of my house and did it all without looking the least bit put out. I suppose that’s why she’s now married into the royal family and why I’m up all night watching her.

7. These two loved up idiots:

I mean, just…they clearly love each other. And it’s disgusting. But adorable. And we wish them all the happiness in the world.