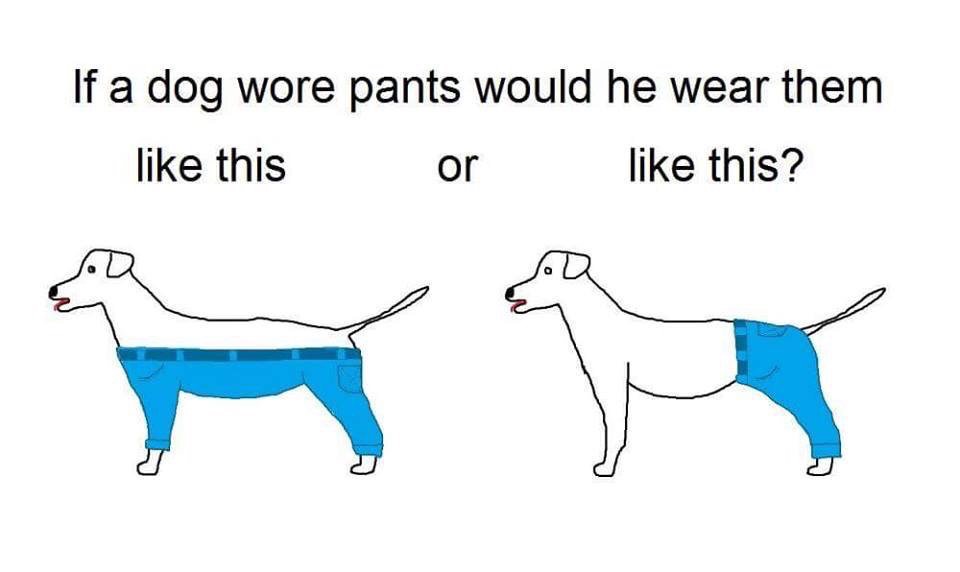 Have you ever wondered how some things become a thing? That stupid dress. Tubed-meat sandwich debates that will ruin our country faster than Donald Trump. Hell, Donald Trump.

How is this a thing? With all the things going on, how is this, right now, a thing?

Looking for an early morning Twitter distraction while working on stories for this fine site on Tuesday, I came across a few friends on Twitter making dog jokes. I fell down the rabbit hole to find the genesis of their jocularity was, well, this:

I have no idea where it started and I almost don’t want to know, but it seems like it’s Reddit’s fault, as most things that become things are. Maybe it’s Facebook. (It’s probably Facebook.)

No matter how it became a thing, it’s a bona fide thing. And this thing doesn’t make any damn sense why it became a thing. Most things are debates. Ketchup or mustard is a thing because there are heated and deep-rooted reasons behind each side. Vinegar or tomato-based barbecue sauce is an understandable thing. The sandwich debate, as inane as it can be, is a thing because there are people who understand what a sandwich is and others who like to make the rest of us insane for sport.

Look at the two options for the dog wearing pants. How is this a thing?

On the left, the pants have four legs, covering the belly of the beast and, yes, his (assuming these are male dogs) dangling privates. But the dog’s ass is roundly exposed, which certainly takes into account some over-excited tail wagging, but fails to cover the most coverable part of one’s anatomy, even for dogs.

Why wear pants if not to cover all parts of the nether region? If you’re going to put your dog in assless chaps, why put him in chaps at all?

And more importantly—if that’s even possible—if you added a sweater to this doggie ensemble, how would he wear that? Would it dangle around his neck with no arm or leg holes like a ridiculous scarf? Would it somehow fasten to the tail?

Clearly the right dog in the image is, well, the right dog. By cutting a little tail hole the right pants allow for movement but still protect and cover all that needs to be protected and covered. And they give ample front leg and body space for proper dog sweatering.

I get that life is hard and in order to survive we need distractions to get us through the day. There there isn’t much more of a distraction than a pooch in pants, yes, but if you’re going to clothe your canine, cover the damn dog’s ass. This isn’t hard, so as fun as the distraction has been, it shouldn’t even be a thing, even though it is.