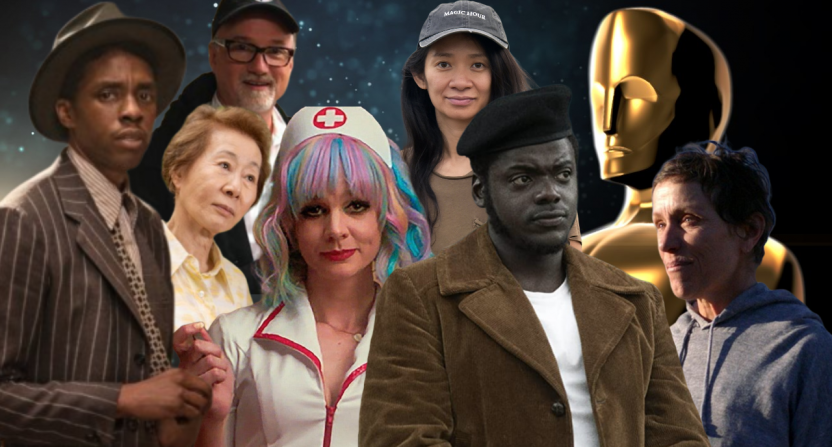 So, you’ve decided to watch the Oscars. Congratulations!

Welcome to the Academy Awards, as Hollywood honors movies from a year when nobody went to the movies. The pandemic altered the experience. Streaming is in. Theaters might be on the way out – permanently. Someday, children will gawk at the few remaining cineplexes the same way people now stare at phone booths.

The good news: all the nominees can be seen on streaming services. Or if you want to kick it old school, you can still catch some on the big screen.

More good news: the Oscars will have new blood. A record-breaking twelve acting nominees will be first timers. Forget #OscarsSoWhite. We’ve got #OscarsSoDiverse. Nine nominees are people of color, and it’s possible that all four acting winners could be people of color. Plus, for the first time ever, two women have been nominated for Best Director.

Unlike other award shows, the stars won’t be on Zoom. All nominees are expected to be in attendance, either in Los Angeles or across the pond at a satellite location in London.

They must show up to get that sweet Oscar gift bag. Valued at $60,000, the New York Post reports that it includes a two-night trip to Fiji at the private Raiwasa Resort, with a dedicated staff of 12 and your own personal five-star chefs.

Fancy! Look at this place:

Who will be the big winners for the major awards? Let’s find out.

Nominees: Judas and the Black Messiah, Mank, Minari, Nomadland, Promising Young Woman, Sound of Metal, The Father, The Trial of the Chicago 7

Should Have Been Nominated: Da 5 Bloods

Pay attention to the Best Director winner. That’s usually a tip-off. Since 1953, the same movie has won Best Director and Best Picture 53 times out of 67. There’s normally little drama. However, in 2019, there was a rare split as Green Book (#groan) won Best Picture, and Best Director went to Alfonso Cuarón for Roma. Roma might have won the big prize if the Academy didn’t prefer regular theater releases over Netflix features.

Even after a year when most theaters were closed, the anti-streaming bias probably will push Nomadland over Netflix’s Mank (an Oscar-high 10 nominations) and The Trial of the Chicago 7. Nomadland is a sobering slice of a different side of the American dream. Plus, it took top honors at the British Academy Film Awards and the Golden Globes.

Should Have Been Nominated: Delroy Lindo (Da 5 Bloods)

Possibly the deepest category in the field, you can make a compelling case for all the nominees. The late Chadwick Boseman is undeniably the frontrunner and sentimental choice. However, Anthony Hopkins’ surprise victory at the BAFTAs adds some intrigue.

Still, it would be a shock given Boseman’s popularity and powerhouse effort in his final performance. As trumpet player Levee, this is a different kind of character than we’re accustomed to seeing from Boseman, who famously portrayed iconic heroes both real (Thurgood Marshall, Jackie Robinson, James Brown) and fictional (Black Panther). Levee’s volatile combination of ambition and desperation was enough to earn Boseman a posthumous Golden Globe.

Hopkins, a six-time Oscar nominee, has enjoyed a career resurgence as an octogenarian. At 83, he’s the oldest ever to contend for Best Actor (last year, he was also nominated in a supporting role for The Two Popes). Hopkins’ lone Oscar victory came way back in 1992 for his memorable performance as Hannibal Lecter in The Silence of the Lambs.

Should Have Been Nominated: Nicole Beharie (Miss Juneteenth)

While Carey Mulligan is the betting favorite, this race is wide open. Frances McDormand won at the BAFTAs. Andra Day took home the trophy at the Golden Globes. Viola Davis captured the top prize at Screen Actors Guild Awards. Carey Mulligan won at Critics’ Choice Awards. That’s a lot of star power at the top.

This should probably be a two-woman competition: Mulligan vs. Day. Promising Young Woman is what happens when you have the perfect marriage of the right actress with the right part. Previous few artists could’ve pulled off what Mulligan did, going from incredibly vulnerable to absolutely threatening. She owns every scene. It’s Mulligan’s show, and the movie doesn’t work without her.

You can make a good case for Day, who shines in a mediocre movie. She has a tough job having to work harder than the other nominees. The Billie Holiday biopic demanded the Grammy-nominated singer to be uncompromisingly raw. You can tell that she put a tremendous amount of effort into playing her idol.

Should Have Been Nominated: Richard Jenkins (Kajillionaire)

The Academy’s decision to put LaKeith Stanfield and Daniel Kaluuya in the same category is bizarre, since clearly Stanfield was the lead and Kaluuya was in a supporting role. This understandably prompted a lot of questions. Judas and the Black Messiah isn’t an ensemble work like The Trial of the Chicago 7. This is the story of FBI informant William O’Neal (Stanfield) and his role in the death of Black Panther Party activist Fred Hampton (Kaluuya).

Kaluuya’s in the driver’s seat after wins at the Golden Globes and BAFTAs. The two-time Oscar nominee might be the best actor of his generation, having first gained attention in Get Out. This is a different role, as he transformed into an imposing figure. For the rest of the nominees, much respect to Sacha Baron Cohen, who also plays a historical figure. As Abbie Hoffman, he has some of the best scenes and the best lines. His delivery when he’s on the witness stand and says: “Give me a moment, would you, friend? I’ve never been on trial for my thoughts before”  is mesmerizing.

Should Have Been Nominated: Ellen Burstyn (Pieces of a Woman)

First, let’s address the elephant in the room. Why is Glenn Close nominated? Yes, she’s the best actress to never have won an Oscar (this is her eighth nomination). But if Close gets a statue for this, heads will explode. Hillbilly Elegy is a bad movie. Period. Full stop. Don’t take our word for it. Close earned a Razzie for one of the year’s worst performances. It’s just the third time an actor has been nominated for both an Oscar and a Razzie for the same role.

Youn Yuh-jung is a well-deserving candidate. The 73-year-old has already picked up SAG and BAFTA wins for her role as an endearing unconventional grandmother who would rather play cards than bake cookies. The South Korean star could become the first Asian Best Supporting Actress winner.

Should Have Been Nominated: Aaron Sorkin (The Trial of the Chicago 7)

Chloe Zhao makes art in an unusual way, often casting regular people (non-actors) to play versions themselves. That worked great in The Rider, a film about a rodeo star who suffers a career-ending riding accident. Nomadland features real actors in Frances McDormand and David Strathairn, but the rest of the cast are actual people who live that nomadic lifestyle. Living out of their vans, traveling the country, and taking jobs as seasonal workers. Because of that style, Zhao’s movies feel like documentaries.

You could make a strong argument for David Fincher, the best director to never win an Oscar. He made one of the greatest films of the 2010s in The Social Network, and one of the best of the 2000s in Zodiac. Fight Club, Se7en, and Gone Girl are also remarkable. Mank isn’t as good as any of those, but from a technical perspective, this passion project is an amazing achievement. Fincher is a master craftsman who deserves to be honored.