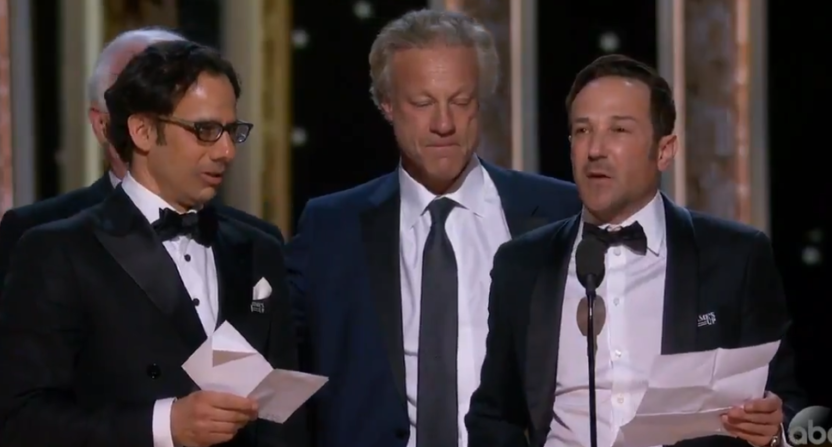 For the second straight year, the Academy Award for best documentary feature has gone to a film with significant ties to the sports world. Last year, it was ESPN’s special 30 for 30 entry of OJ: Made In America (a five-part “movie” that was the longest film ever to win an Oscar, and one where they changed the rules after its win to ban such multi-part documentaries in the future). This year, it’s Netflix’s Icarus.

The victory for Icarus, Bryan Fogel’s film that starts with the director exploring doping to win a cycling race and eventually connecting with Russian scientist Dr. Grigory Rodchenkov to expose that country’s massive state-sponsored doping movement, is perhaps especially notable considering the timing.

It’s a remarkable time for Icarus, considering the recent controversy around Russia and doping at the Olympics, which led to the IOC “banning” Russia from Feburary’s PyeongChang Games, but allowing Russian athletes to compete as “Olympic Athletes from Russia,” then reinstating the country in time for the closing ceremonies. It’s also notable considering the ongoing libel lawsuit against Rodchenkov filed by several Russian biathletes in a New York court and funded by Brooklyn Nets’ owner Mikhail Prokohorov (who has previously been accused of ties to the doping scandal), which has a lot to do with claims Rodchenkov made in the film as well as in other outlets.

And Rodchenkov is in hiding in the U.S. right now, afraid of Russian government retribution. There have even been suggestions from Rodchenkov’s lawyer Jim Walden that the lawsuit is “raising the specter that the Kremlin itself might be acting through proxies here” and that it might be an attempt “to find him through judicial means.”

While the Oscar nod for Icarus is unlikely to have any direct impact on that case, it certainly may draw more public attention to what’s going on with the lawsuit against Rodchenkov. As Zack Smith noted on Twitter, there are perhaps even sequel possibilities here:

Netflix follows ESPN, makes it back-to-back sports doc wins at Oscars w/ Icarus win. What’s crazy is, with the doctor from Russia in grave danger, and Russia still doping in the Olympics, I think there’s more story to be told. Has a winning doc ever had a sequel?

It’s also interesting that Fogel dedicated the award to Rodchenkov:

After winning Oscar for Russian doping film, @bryanfogel: "We dedicate this award to Dr Grigory Rodchenkov our fearless whistleblower who now lives in grave danger. We hope Icarus is a wake-up call, yes about Russia but more than that about the importance of telling the truth"

And this led to some interesting backstage commentary from Fogel (seen at right above) on the IOC and president Thomas Bach:

#Oscars: Makers of #Icarus call for resignation of Prez of #IOC, #ThomasBach. Referring to #Peyongchang2018, "What the IOC has done by banning #Russia and allowing athletes to compete is a fraud. "

"Thomas Bach needs to resign. He is a crook."—@bryanfogel from 'Icarus' backstage on the President of the International Olympic Committee re: Russia's ban and their athletes' subsequent participation in the Olympics.

Backstage at Oscars, Bryan Fogel, director of the Oscar winning documentary "Icarus" about systematic Russian doping, says the Russian doctor in his movie is still under US federal protectionand being "hunted" by Russians, and called for IOC pres Thomas Bach to resign. pic.twitter.com/Jjq8Q7O39i

Beyond that, many had thoughts on what this means for the documentary, for Russia, and for world anti-doping efforts:

Watch the film. It’s on Netflix. Russia should have been banned from Rio and Pyeongchang both, because if what they did wasn’t worth a Games death penalty, nothing is.

Icarus is good, and not trivially about sports or doping, but also the culture of corruption and impunity Putin has cultivated in every part of Russian life. The fish rots from the head.

I hope all of Russia & other nations are watching right now. Congrats to all of those who made real life events become mainstream. There is no room for doping in sport. #Icarus #Oscars

And hey, Oscars host Jimmy Kimmel had quite the post-award comment: