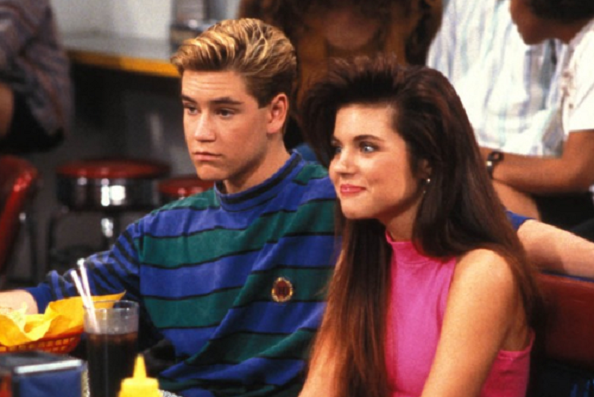 Saved By The Bell will always be remembered for being a classic TV show example of what life was like for high schoolers in the 1980s and 1990s. But sadly for the original fans of the show, it seems the biggest couple on the show didn’t have a happily ever after.

Peter Engel created the show and recently spoke to TV Line about the series and what the characters would be up to now. When he was asked about Zack Morris and Kelly Kapowski’s future life as a married couple, things became tense:

“Probably not,” he said about the couple’s marriage. “Well, they’d be married — but not to each other.”

But their wedding was so beautiful!

It’s not terribly surprising for Engel to say that about Zack and Kelly. After all, they were high school sweethearts and those aren’t always 100% perfect and bound to last.

Part of the reason why Engel spoke with TV Line was to promote his new memoir titled I Was Saved by the Bell: Stories of Life, Love, and Dreams That Do Come True. It’s already out and can be purchased on amazon.

It talks about the secrets of the show and what it was like writing the show as a whole.

In the interview, Engel mentioned what all the characters would probably be up to now:

“Zack would probably be the host of a game show or talk show, or he’d be managing a hedge fund; Slater would be a high school football coach; Screech would be Bill Gates; Jessie would have just lost to Donald Trump; Lisa would probably be Vera Wang, or a buyer at Neiman Marcus; and Kelly would be married with children and have a cooking show on the Food Network, which [Tiffani Thiessen] has — and I watch!”