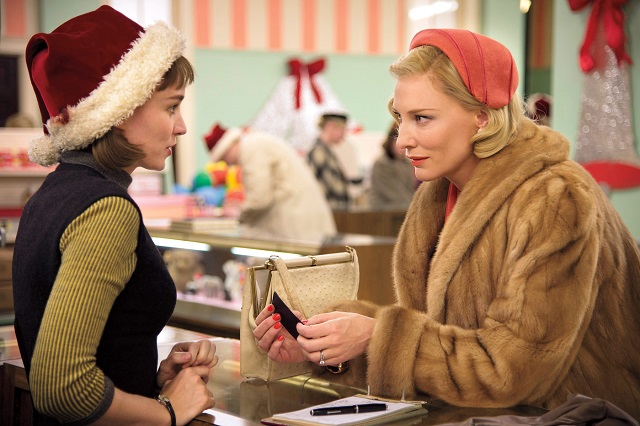 A film none of us have seen scored the most nominations for the 2016 Golden Globe Awards, which were announced Thursday morning.

Carol, the story of an aspiring young photographer and her romance with an older woman going through a divorce, earned five nods, including Best Picture – Drama,  Cate Blanchett and Rooney Mara for Best Actress – Drama and Todd Haynes for Best Director. The film opened in limited release on Nov. 20, and has been slowly rolling out across the country between Dec. 25 and Jan. 15.

So as snarky as it may sound, it’s a bit difficult to get excited for and support a movie that is drawing wide critical acclaim (if you’ve read a top 10 movies of the year list, Carol is likely on it), but hasn’t been available to the general filmgoing public. Earning four nominations apiece were The Revenant (which doesn’t open wide until Jan. 8), Steve Jobs and The Big Short. Those are three more films that people either didn’t see or haven’t yet had the opportunity to watch.

To me, this underscores an inherent problem with film awards and ceremonies. And look, I love the Golden Globes and Academy Awards. Those are events to me, just like the Super Bowl and NCAA Tournament. But besides a couple of my friends who are really into movies and see most of the contenders this year, I typically feel like I’m out there on an island.

I’m not sure the TV nominations were much better in terms of populist appeal. Six shows — American Crime, Fargo, Mr. Robot, Outlander, Transparent and Wolf Hall — each earned three nominations. I will shout support for Fargo and Mr. Robot to anyone and everyone who will listen, and I think those shows have broken through to some extent. But what about those other four?

Credit the Hollywood Foreign Press Association for quirky choices that run outside mainstream appeal, unlike the Emmy Awards. And the organization has also been quicker to recognize shows produced for streaming outlets. Netflix earned eight nominations, while Amazon scored five. Yet there is something to be said for nominating programs that more people watch, even if popularity doesn’t connote quality.

Fortunately, these shows are also glitzy, celebrity-packed events, which adds to the entertainment value. Add liquor, a more informal tone and a caustic wit like Ricky Gervais, who’s returning as host after a three-year break, and the Golden Globes are a whole lot of fun, regardless if you’ve seen any of the nominated movies or TV shows.

Were there any notable snubs? I think Brooklyn is one of the best movies of the year, yet it only received one nomination. Neither Mark Ruffalo nor Michael Keaton got love for their roles in Spotlight, which baffles me. (Ruffalo was nominated for Infinitely Polar Bear, which I’m presuming few of you saw.) Johnny Depp has to be pissed he didn’t get love for Black Mass.

But don’t worry about Mad Max: Fury Road; it got just two nominations, but in the important categories of Best Picture – Drama and Best Director. And Sylvester Stallone received an extremely well-deserved Best Supporting Actor nod for Creed. (Was Michael B. Jordan a Best Actor snub? Maybe, but that’s a pretty stacked category. Who would he bump out?)

The Martian is nominated for Best Musical or Comedy? OK. I mean, it was a pretty funny movie in many places. Unless Matt Damon sings and dances on Mars, and I just don’t remember, I don’t see how it’s on this list. You know what was a great comedy? Spy, which was nominated along with Melissa McCarthy in the Best Actress – Comedy category. That movie getting an award would be really cool. And Amy Schumer getting a nomination for Trainwreck puts a bow on what’s been a great year for her.

You can read the nominees for movies and TV below. You’ll have about a month to watch all of that stuff before the Golden Globe Awards ceremony. The broadcast will air live Jan. 10 at 8 p.m. ET on NBC.