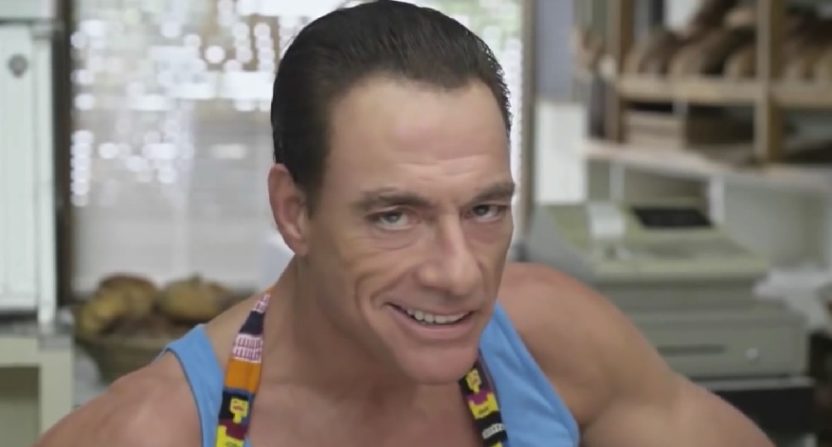 It’s been 30 years since Predator was released in theaters (on June 12, 1987, to be exact), and to commemorate the occasion, The Hollywood Reporter put together an oral history with a handful of people who were involved in a production which was seemingly on the verge of disaster with its jungle locations and a creature design that hadn’t been finalized before filming began.

There are plenty of entertaining stories from producers, screenwriters, stunt coordinators and actors who helped make the film. (Unfortunately, none of the main cast — such as Arnold Schwarzenegger, Jesse Ventura, or Carl Weathers — director John McTiernan or producer Joel Silver participated.) But the standout from THR’s oral history is the various stories about why Jean-Claude Van Damme was fired from the movie.

Yes, that’s right. Jean-Claude Van Damme was originally supposed to be in Predator — as the title character. The Muscles from Brussels was going to suit up as the alien hunter who pursues a team of special forces soldiers before Arnold Schwarzenegger eventually turns the situation around. It didn’t work out, but 30 years later, there’s still some disagreement as to why.

Did he complain too much, as casting director Jackie Burch says?

Jean-Claude Van Damme was someone who used to constantly come into my office, jumping up in the air, showing me his moves, begging me for work. He was nobody. He didn’t have any credits. So finally I said to Joel, “He’d be great as the Predator because no one moves like him.” I mean he really is quite amazing. He even stored his furniture in my garage! And then (laughs) he wasn’t there that long. And I heard he was complaining the whole time and they fired him. And he came back and got his stuff out of my garage. And then the next time I saw him he was getting $5 million a picture.

Second-unit director and stunt coordinator Craig Buxley says Van Damme was fired for breaking the head on the original costume.

[…] Jean-Claude walked up and said, “Are you Joel Silver?” And he said yeah. And Jean said, “Well look at this!” And he jumped up in the air, I swear to God, did the splits with his legs straight out and his crotch was at eye level — and I’m 6 feet tall. He was there to play the creature, and a company called Boss had designed a creature. It had the head of an ant. And they spent an absolute fortune on this. And so they brought Jean-Claude out and they put the head on Jean-Claude, and Jean-Claude stood up and freaked out, and took off this $20,000 head and threw it on the ground and it shattered. And Joel said, “What the f— are you doing!” And he told Jean-Claude, “You’ll never work in Hollywood again! Get off my set!” So that was it.

I was in Joel Silver’s trailer, and he had called for Jean-Claude to come see him. And he comes in the trailer and Joel starts saying, “You gotta stop kickboxing!” — because [Jean-Claude] wanted to kickbox — and he was telling him, “Look, the Predator is not a kickboxer.” And Van Damme was like (Van Damme voice), “I must do that; that’s how I see the Predator.” And Joel said, “Well, you’re fired. Get out of here.” And Van Damme says, “Kiss my balls!” and walks out, and that was the end of that.

Other accounts also say that Van Damme was let go because he kept passing out from dehydration, wearing a suit for special effects in the Puerto Vallarta heat. The original suit itself was a problem too, with studio executives hating the way it looked, and when that look was ditched, so was Van Damme. Yet another recollection was that Van Damme was deemed too short to be imposing and was fired for that.

Ultimately, things worked out for Predator and Van Damme. Producers settled on a design that’s now iconic and put seven-footer Kevin Peter Hall in the suit. Van Damme went on to show his martial arts skills in cult classics Bloodsport and Kickboxer, and became one of the 1990s’ most famous action stars. The right decision was made, but what led up to it makes for some hilarious stories 30 years later.