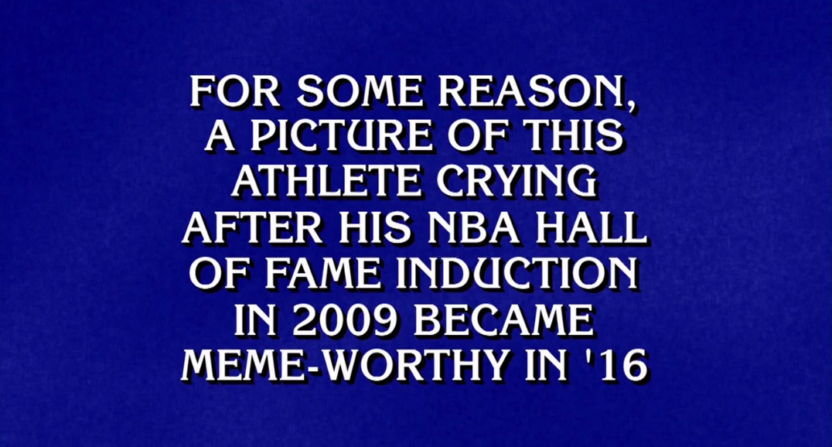 Jeopardy! dusted off a meme-related category (“Fond Meme-ories”, if you’re wondering which pun they went with), and with it came a reference to Crying Jordan, perhaps the most omnipresent sports-related meme of the past five years (maybe longer, but these rankings aren’t really scientific.)

Here’s the clue in question:

It was only worth $400, and a contestant nailed it easily; considering the general Jeopardy! problem with contestants whiffing on sports-related questions, that should tell you just how deep Crying Jordan has penetrated our collective online lexicon.

Of course, that’s still not an entirely correct answer; the meme predates 2016 pretty handily, if I’m recalling things correctly. For example, here’s one of the best, after the Mets lost the 2015 World Series to the Royals:

Thx bae. RT @jennifersterger: Whoever made this is my new favorite person ???? pic.twitter.com/8cg2qb5QqS

It was pretty clearly a “thing” by that point in time, and by early 2016 we were already having discussions about whether or not it had been played out. (It hadn’t been, at least not by online content standards.)

Here’s Deadspin’s Barry Petchesky writing about its origins and journey to relevance in an article from February 2016:

The Wall Street Journal dips into the history of the meme, starting with the photo itself: taken by Associated Press photographer Stephan Savoia in 2009, as Jordan took the lectern for his Hall of Fame enshrinement speech. Jordan was moved by the prolonged ovation—you can see Crying MJ in motion here, starting about 40 seconds into the video. Savoia had no idea his photo went viral until the WSJ contacted him this week.

The meme started surfacing last spring, according to Google trends, but has skyrocketed in popularity since September.

So that’s essentially a 2015 thing, that has persisted all the way through to today, when it’s so pervasive that even Jeopardy would comment on it.

The real tragedy, of course, is that the contestant nailed it on the first try. Because someone getting a question about Crying Jordan wrong would have resulted in that contestant getting Crying Jordan’d themselves. That might have been new ground for the meme, a sort of double-Inception sort of thing that would only be surpassed by Michael Jordan himself doing something Crying Jordan-worthy. Maybe crying again.