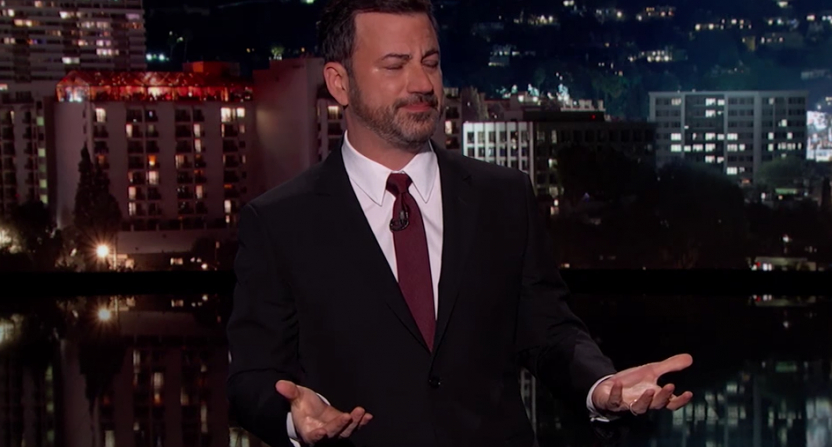 Jimmy Kimmel used his talk show Tuesday night to address something decidedly unfunny: the medical ordeal his son went through last week, only hours after being born.

Kimmel shares the story of finding out the newborn baby had a heart disease called tetralogy of fallot with pulmonary atresia, which required immediate open-heart surgery.

The whole thing is absolutely wrenching, though it has a happy ending.

Six days after open-heart surgery we got to bring him home, which is amazing. He’s doing great. He’s eating, he’s sleeping, he peed on his mother today while she was changing his diaper. He’s doing all the things that he’s supposed to do.

Kimmel was emotional throughout the story but never more so than at the end, when he made an impassioned plea for medical research and health care coverage for all Americans, so that people like his son who have preexisting conditions can still be covered and parents with less money can still keep their kids healthy.

President Trump last month proposed a $6 billion cut in funding to the National Institute of Health. And thank God our congressmen made a deal last night to not go along with that. They actually increased funding by $2 billion, and I applaud them for doing that. Because more than 40 percent of people who would have been affected by those cuts to the National Institute of Health are children, and it would have a major impact on a lot of great places, including the Children’s Hospital of Los Angeles, which is so incredibly sad to me.

We were brought up to believe we live in the greatest country on Earth, but until a few years ago millions and millions of us had no access to health insurance at all. Before 2014, if you were born with congenital heart disease like my son was, there was a good chance you’d never be able to get health insurance because you had a pre-existing condition. You were born with a preexisting condition. If your parents didn’t have medical insurance, you might not even live long enough to get denied because you have a preexisting condition. If your baby is going to die and it doesn’t have to, it shouldn’t matter how much money you make.

He finished with a message about not letting “partisan squabbling” get in the way of basic health needs.

“No parent should ever have to decide if they can afford to save their child’s life,” he said. “It just shouldn’t happen.”