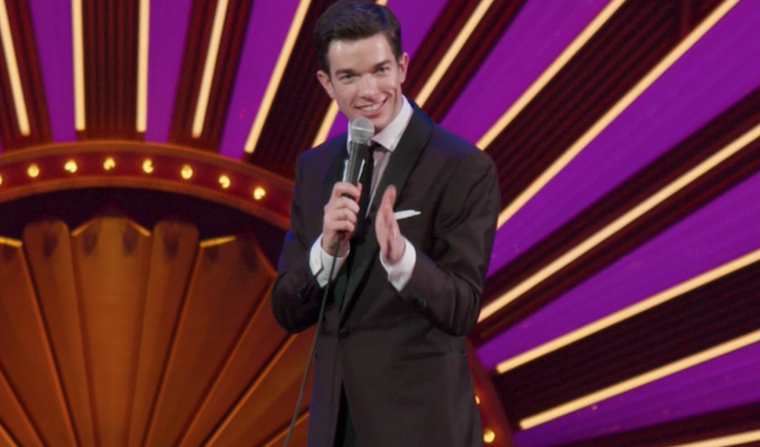 One of the more rewarding aspects of watching stand-up comedy, especially in following the careers of certain comedians, is to see a performer break out and reach a larger level of popularity. John Mulaney has been a favorite of hardcore comedy fans for years now and his profile has slowly been growing.

Coming off an appearance hosting Saturday Night Live (where he had previously been a writer for six seasons) and a new stand-up comedy special on Netflix, John Mulaney is having his moment. No, he’s probably not going to parlay this higher profile into a sitcom. (He already tried that.) And he may never be someone that your parents become familiar with (though some of you probably have cool parents).

But that doesn’t mean being a really good stand-up comedian and continuing to become even better at that craft isn’t worthy of merit. With his new stand-up special, Kid Gorgeous, Mulaney may have even taken the next step into becoming a great stand-up.

How is greatness defined in stand-up comedy? Sure, that’s a subjective term, influenced by factors such as hosting SNL and getting a well-promoted comedy special on a prominent outlet. (I think Kyle Kinane is one of the funniest stand-ups working today, but he hasn’t enjoyed either of those benefits. So is he not great?)

But when a comedian is having his or her moment, you can see their confidence on stage. They’ve compiled a really good set of material, much of which can be applied to current events and trends, and they know it. Promotion and publicity aside (and Mulaney has benefited from recent features in the New York Times and The Ringer, among other outlets), they command the stage and book high-profile venues. Outside of an arena or stadium tour, can a comedian play a better room than New York’s Radio City Music Hall?

Mulaney sold out seven shows there, which made up this Kid Gorgeous special. And after opening with the seeming absurdity of being on that stage, he quickly acted like he belonged. He didn’t pace back and forth across the stage like Chris Rock did in his heyday, but he frequently trotted — almost running — from one end to the other, playing to each end of the room. A tracking shot early on by director Alex Timbers (a two-time Tony nominee) captured the energy of Mulaney’s performance. To use a sports term, he was leaving it all out there.

Perhaps it works so well for him because he still looks so boyish at 35, but Mulaney often recalls his boyhood days, explaining how they’ve shaped the neuroses that guide his adult life (and, of course, influence his comedy). So when he talks about unnecessarily strict conversations he had with his father or how performing in a large auditorium reminds him of elementary school assemblies, it’s easy to imagine the young Mulaney in those settings.

But Mulaney doesn’t rely on those shortcuts. Once he gets the audience to form the picture in their mind, he embellishes it with an outlandish story, such as child homicide detective J.J. Bittenbender coming to his school with lessons (Street Smarts!) on how to avoid being kidnapped. And lest you think Mulaney is exaggerating, Bittenbender and his “Stranger Danger” lectures for elementary school kids were very real.

Later on, he speaks for at least two or three generations of adults saddled with college debt and not much to show for their four (or more years) on campus. Mulaney doesn’t actually mention debt, but expresses his frustration at the audacity of his alma mater to ask for donations when he already paid $120,000 (probably more) in tuition. And maybe he’s kicking himself just a bit for being an English major (though he’s apparently done just fine). Yet those who are still paying off their debt (and might be handcuffed by it) could easily project that discontent onto Mulaney’s bit.

Where Kid Gorgeous truly excels, however, is in treading on political territory that’s been walked over continually and in every direction by virtually every comedian (along with pundits and commentators) working today. Even if it might be amusing or relieving to hear a favorite comedian share his or her take on the Trump administration, few haven’t said what we’ve already thought for ourselves. The satisfaction comes from hearing those opinions echoed.

But Mulaney may come up with the freshest take yet. He doesn’t criticize Trump directly, but spoofs just how absurd the entire situation is — both the current administration and how media and citizenry respond to it — with a brilliant analogy of a horse loose in a hospital. It’s something that you would hope would be under control, yet we all have no idea what to expect.

Some might knock this stand-up special for incorporating material that’s been seen elsewhere, such as during Mulaney’s SNL monologue. But you’d have to search to find one or two of the other bits. And thanks to interviews and podcasts, many comedy fans realize that performers come up with a show that they take on the road and repurpose for different settings. Even if you’re familiar with some of the material, however, you almost certainly don’t know the whole show and won’t have had the pleasure to see it as a complete show.

Kid Gorgeous is John Mulaney at the top of his game, and he’s making sure that his moment doesn’t pass before capitalizing. With his previous stand-up specials already popular on Netflix, he signed a multi-show deal that began with this latest special. How many shows are a part of the deal hasn’t been reported, but we’ll probably be seeing Mulaney again soon enough — maybe just as Kid Gorgeous begins to fade from memory. This show should’ve ended with a graphic like a Marvel movie: “John Mulaney Will Return.” And we’ll be waiting.