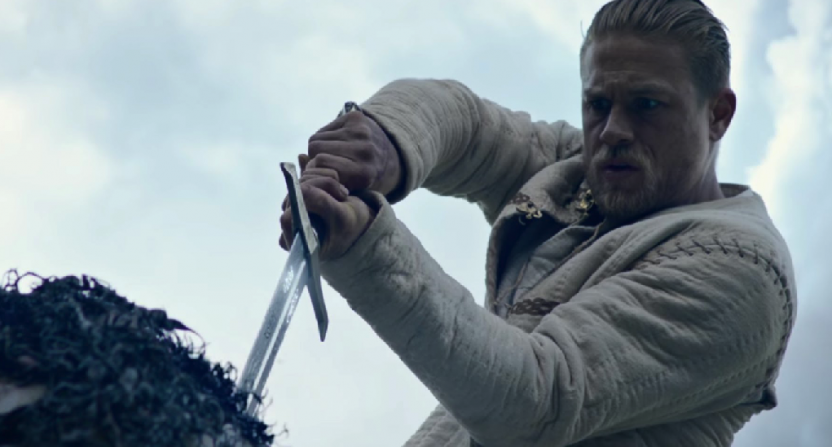 Criticizing King Arthur: Legend of the Sword for being too much of a Guy Ritchie film might seem silly. You generally know what you’re getting with Ritchie as director.

He has a distinct style, utilizing speed ramping, slow motion and fast-cutting to keep the pace moving even when some scenes call for a bit more focus on detail. His characters are fast-talkers, bantering with colleagues and adversaries while often relying on wit to gain an upper hand. And music is a big factor in providing momentum, a hard-charging beat that adds to what’s shown on screen, underlining the action.

Check off all of those boxes for Legend of the Sword (which no one will call this film). This is very much a Guy Ritchie King Arthur movie. Imagine Lock, Stock and Two Smoking Barrels or Snatch taking place in medieval times, with some sword and sorcery mixed in (along with pinches of other influences like Game of Thrones, 300 and Man of Steel), and that’s what we have here.

It’s a reimagining of a legendary mythological figure akin to what Ritchie did with Sherlock Holmes, tearing down an old, familiar archetype that had become stuffy and reinventing it with an energy and mindset aimed at appealing to new audiences. That will work for some viewers who either aren’t all that familiar with the Arthurian mythos or are eager to see a new take on the story. But it will turn off plenty of others who already have an idea of what a King Arthur story should be and aren’t interested in any radical reinventions.

Those who want a more classic version of King Arthur will always have John Boorman’s 1981 film Excalibur to lean on, an epic which still holds up quite well. Director Bryan Singer was developing a remake of that film for Warner Brothers, but a competing King Arthur project developed by David Dobkin and Joby Harold was reportedly in better position to be made. In addition, Harold had outlined a possible six-film series, the sort of franchise vision that the studio was seeking.

Clearly, a franchise is what Warner Brothers has in mind, as Legend of the Sword is very much an origin story, essentially “King Arthur Begins.” That is surely why Ritchie’s film lacks many of the key elements and characters that people might associate with a King Arthur story. Where’s Merlin? What about Lancelot? Or Guinevere?

But just as Batman Begins, Casino Royale and J.J. Abrams’ 2009 Star Trek withheld fundamental components of their characters’ mythology to save them for future films, so does this version of King Arthur tease us on what’s to come, largely by relying on knowing references and winks that try to assure fans. Don’t worry; we’ll get to that. See that round table being built? Yet what so many aspiring franchises seem to overlook is that a series won’t extend beyond the first film if the opening chapters aren’t very good.

There is quite a bit to like in this King Arthur. Ritchie (and Harold) deserve credit for trying to be different, bringing modern sensibilities to an old tale, and not giving us the same story in different packaging. This approach works better than Antoine Fuqua’s 2004 film, which took more of a historical fiction angle (Arthur as a Roman soldier?) for more of a war film, stripping away all of the mysticism associated with the mythology. Ritchie very much embraces those mystical elements, which gives his movie a similar feel to John Milius’ 1982 Conan the Barbarian. Yet it also lacks the epic scope of that cult classic.

Part of that is because Ritchie is more interested in a personal story. This version of Arthur (Charlie Hunnam) was sent away in Moses-like (or Kal-El) fashion to save his life from his tyrannical uncle, Vortigern (Jude Law), who usurped the throne from his brother. Lusting to rule Camelot, Vortigern conspires with witches (sacrificing his own family in the process) to summon the dark powers necessary to kill King Uther Pendragon (Eric Bana). Before being vanquished, Uther does manage to send Arthur away and hide the legendary sword Excalibur. When that sword appears many years later, Vortigern’s authority is threatened and an oppressed people begin believing that a savior will draw the sword from the stone and liberate them from their tyrant.

Though Ritchie focuses more on Arthur’s story and his struggle to accept his destiny, the film does allude to a much bigger world around these characters. There is a war between mages and man. Early in the film, the sorcerer Mordred attempts to invade Camelot, bringing giant elephants to life. There’s never been a King Arthur movie with giant elephants carrying fortresses and armies on their back, so Ritchie and Harold get nods for that. Vortigren makes his evil bargains with an octopus-like creature whose tentacles morph into water-spawned witches. The mage who befriends Arthur and his lads — and is probably supposed to be Guinevere eventually — can control animals. And the giant snakes are what probably called Conan the Barbarian to mind.

Yet the movie largely keeps those mystical elements at a distance after they’ve accomplished the purpose of providing some CGI spectacle. The magic that infuses the King Arthur mythology comes into play when Arthur finally taps into the power Excalibur offers, creating a video game-like setting that comes off as the hero unlocking an achievement or finding some magical prize. It’s an intriguing take on the power that the holder of Excalibur and the man who would be king can wield. However, it also makes Arthur seem less infallible. Just grab the sword handle with two hands and all the trouble goes away. Well, maybe not when he has to fight the demon knight who killed his father at the end. But is that outcome really in doubt?

Ritchie is arguably at his best when he can let his signature style take over a film. Even more so, his movies are better when his cast get what he’s doing and roll with it, like jazz or basketball. When he has the right actor, such as Robert Downey Jr. playing Sherlock Holmes, style becomes substance. Even if that style isn’t to your liking, it works and Ritchie’s movies can crackle with energy like few others. Unfortunately, Charlie Hunnam isn’t quite the right instrument to play Ritchie’s music well. He certainly looks the part of a chiseled leading man who can kick ass and be one of the lads. But he can’t quite embrace Ritchie’s style and make it his own. At times, Hunnam almost appears to be in a different movie. Maybe the role of Arthur will come to suit him better if Legend of the Sword yields any sequels. (Its box office doesn’t bode well for that, however.)

In fairness to Hunnam, the story here is also a convoluted mess. Perhaps he couldn’t get a handle on what sort of character he was supposed to be playing from scene to scene. The movie never quite flows as it should, sometimes feeling like a collection of scenes played in succession, rather than telling a story. At one point toward the end of the film, characters jump from one setting to another without any sort of explanation as to how the narrative got them there. No worries, mate. There’s swordplay at hand. But it ultimately feels like what victimized movies like Iron Man 2 and Batman v Superman: Dawn of Justice, sacrificing storytelling for set-up. We need a franchise, my king!

Personally, I’d enjoy seeing Ritchie and this cast taking their version of the King Arthur story further. But if this ever becomes a franchise, it won’t be because the first piece of the series was memorable. Maybe we can get a movie with Eric Bana’s Uther Pendragon in a sword and sorcery epic instead. Love the Bana!