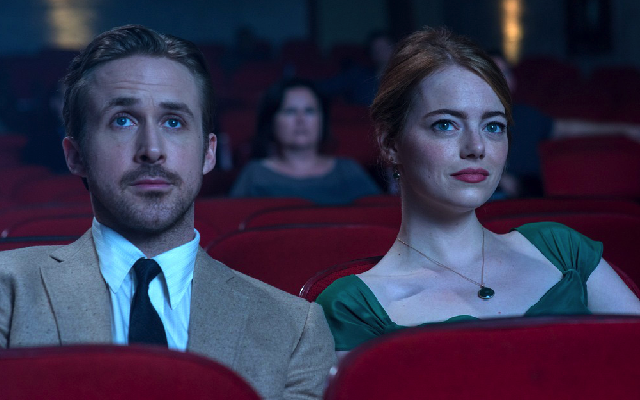 Ryan Gosling and Emma Stone make beautiful music together in La La Land, the results of which are magical and surprising.

Musicals often seem like an outdated, goofy way of telling a story that Hollywood insists on trying to bring back every few years. Though Chicago winning the Academy Award for Best Picture in 2003 didn’t exactly revitalize the form.

The mistake is probably in thinking that musicals have to be a trend, with a successful one begetting another, thus generating a wave of movies with scenes and dialogue set to song and dance. There doesn’t have to be a revival, and the musical will probably never truly die. It just takes the right idea, the right story and the right cast to pull one off and remind everyone how fun they can be.

Damien Chazelle brings all of that together in La La Land with a modern take on the musical romance, a narrative that is accentuated by its song-and-dance numbers, and two of the most appealing leads on the planet in Emma Stone and Ryan Gosling. (Maybe Passengers would have been better if Jennifer Lawrence and Chris Pratt had been singing in space, instead of moping. Something to think about next time a director wants to pair those two up again, which is hopefully soon.)

Stone and Gosling have great chemistry on screen and clearly know it, given that this is their third film together. The two were utterly appealing in 2011’s Crazy Stupid Love, and were just about the only thing worth watching in 2013’s Gangster Squad. (I had actually forgotten they were in Gangster Squad, but in my defense, that’s an thoroughly forgettable movie. Thanks for bringing back the memories, IMDB.) In La La Land, what makes the two such a good pair is their contrast.

Gosling’s Sebastian is jaded and dismayed, frustrated that his taste in music and dream life might not be suited for this world. He loves jazz, which seems to be dying just a bit more each day, and fantasizes about opening a nightclub where he and his mates can play the music they love, believing that people will come because of their passion and what they create will be authentic, rather than catering to popular trends.

Stone’s Mia is wide-eyed optimism, despite living the aspiring actress’ life of constant rejection. (Her auditions make for some of the funniest scenes in the movie, both in terms of the material she has to perform and the swiftness with which she’s dismissed.) She doesn’t need people to see the world the way she does, like Sebastian. She just needs that one break, that one casting director to take a chance on her. But each failed audition increasingly dims her spirit.

The two first meet under less than ideal circumstances, trapped in a L.A. traffic jam. Mia is distracted by what appears to be a phone call, but is actually practice for an audition, and Sebastian honks angrily at her. Even in that moment, the contrast between them is apparent. Sebastian wants the traffic to clear for him, so he can get to his destination, while Mia accepts the traffic and uses the opportunity to hone her craft.

Mia later encounters Sebastian at one of his worst moments, after he’s been fired from playing piano at a nightclub she ducked into while walking home from a party. The sad tune Sebastian played drew her in, but it wasn’t on the holiday song set list that his boss demanded he stick to. Clearly, it’s not the first time he’s defied the club owner’s wishes and that was his last chance. Mia wants to reach out to another frustrated artist who’s created something beautiful and wants to provide solace, but Sebastian is too angry and hurt to acknowledge her. He’s not in the right place for that.

But our star-crossed couple finally has their meet-cute at a party where Sebastian is playing with a band that is comically beneath his skills and taste. It’s not the first time he has to compromise his principles and standards for a badly needed paycheck, and Mia relishes the opportunity to poke fun at a guy who seems to take himself just a bit too seriously. And it’s at this point that Sebastian realizes maybe that’s something he needs in his life, instead of constantly fighting the lonely fight.

Even better for Sebastian is Mia’s previous lack of interest in jazz, classic movies, and other culture from another era that he seems to love so much. By teaching her what he loves about that music and showing her older movies that might demonstrate something to her about her craft, he rediscovers his passion and feels alive, rather than beaten down. Her determination and optimism revives something in him, and maybe he starts trying a little bit harder than he had before meeting her.

Consequently, Mia benefits from having someone truly believe in her, who encourages her to keep pursuing her dream. She doesn’t have to be the doting girlfriend with Sebastian, content just to be with someone. She doesn’t have to settle for being with another struggling artist who shares in her frustration and thus maybe makes her feel a little bit better about her current plight in life. Mia can be the best version of herself with Sebastian, and vice versa.

This is what Chazelle seems to get right about relationships in La La Land. At their best, they make you something better than what you were previously. Someone who accepts you for who you are, yet inspires you to fulfill your potential — whether it’s as a partner, an artist or a person — is what we all strive for, yet often settle for less than that. When it works, when it feels like it truly clicks, and you’ve met that one person who truly gets you, it feels like music. You want to dance. The two of you are in harmony. It doesn’t matter if you don’t necessarily sing or dance well (which makes Stone and Gosling that much more charming on screen). What matters is that you’re inspired to do so.

But making a relationship work doesn’t always allow you to completely follow your own path. Compromises have to be made along the way, and accepting that can sometimes be a result of growing up, yet could also ruin the romance. This is something that La La Land also understands so well, refusing to let itself become a fantasy.

You think that once Mia and Sebastian finally click and find their bliss, it will be nothing but magic. But good drama and true relationships encounter their struggles. Without that, this story would be so light and insubstantial that it would just float away and probably be forgotten. However, Chazelle grounds his movie and his characters in some harsh realities that make the story surprising and unexpectedly profound.

This is territory that Chazelle also explored in his previous film Whiplash. (That was one of my favorite films of 2014, and his follow-up will be one of my best for this year.) How far will you go to realize your dream, to become the best at your chosen profession? Is it possible to bring someone else along for that journey, or are you destined to drift apart as you follow your individual ambitions? Or does that path have to be adjusted to find true happiness, not just career fulfillment?

La La Land does have a happy ending, but it’s not necessarily the one you might expect. Some people might not like the idea that you can’t get absolutely everything you want (if that is indeed your interpretation). It’s not entirely romantic. Others may admire the willingness to go in that direction, to show that magic is fleeting and sometimes only applies to a certain time and certain station as you make your way through life. Because that feels real.

This is what makes La La Land feel special. It portrays magic and reality in the same story.