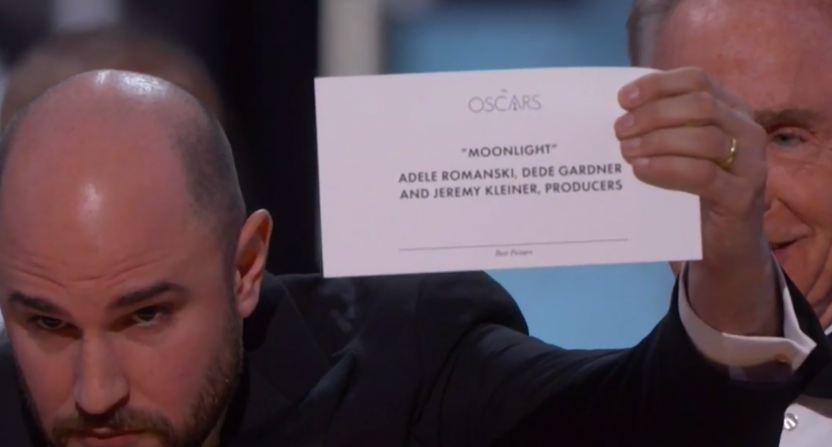 It set Twitter ablaze and the fire is still burning with meme parodies of the momentous occasion when the Oscar for Best Picture was originally announced as La La Land when Moonlight actually won.

Less than a week later, one movie theatre is jumping in on the fun, only it’s recreating the incident with the actual movies.

At the Rio Cinema in Dalston outside of London in the United Kingdom, the staff at the theatre decided to spoof the Oscars by playing 20 seconds of La La Land at a screening for Moonlight. After the 20 second clip was over, the real movie the audience paid for began.

According to Time Out, the second the La La Land clip began, the audience knew what was coming and began to applaud the theatre staff.

“It wasn’t the actual feature film, but a few seconds from a teaser trailer,’ the Rio’s duty manager told Time Out on the phone. ‘Then we shut it down, and did a bit of fumbling to make it look like we made a mistake.”

After Moonlight took home the Oscar for best picture, the theatre, which only has one screen, decided to run Moonlight for an extra week. That also gave them the opportunity to make the same “accident” as the Oscars, even though it was completely on purpose.

Props to @riocinema in #Dalston for playing the first 20 seconds of La La Land immediately before last night's screening of Moonlight pic.twitter.com/2ZLllrnPFq

To make the story even better, the producer for La La Land who made the profound announcement that Moonlight actually won, Jordan Horowitz, appreciated the joke.

This is kind of hilarious. https://t.co/aFD4w2xPmj

He wasn’t the only person not at the theatre to appreciate the move either.

Read this and laugh, then support @riocinema so it can keep doing the wonderful things it does. https://t.co/BAwaUvAHql

Haha this is why I’m a @riocinema member. The best cinema in town https://t.co/YNBwJTMdTU