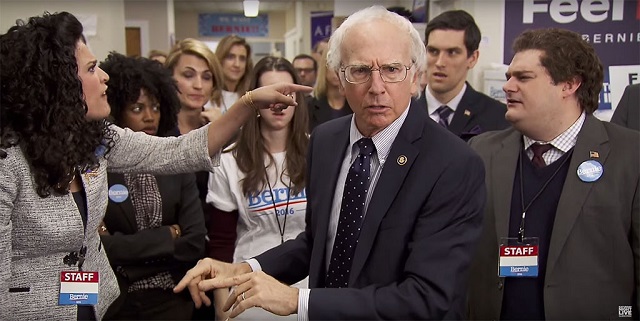 Larry David did a convincing impression of Vermont Senator Bernie Sanders during the 2015-16 Democratic primary on Saturday Night Live. Convincing enough that Sanders himself questioned his true identity.

No, Bernie Sanders is not really Larry David, but there’s a closer connection than any one originally thought. Sanders recently filmed an episode of PBS’ “Finding Your Roots,” where celebrities learn about their genealogy. He found out he was related to David, and relayed the news to the Curb Your Enthusiasm mastermind. David was very pleased upon learning he had a new relative.

It was also revealed during the panel that David and Sanders are related. Sanders learned of the connection when filming an upcoming episode of PBS’ “Finding Your Roots,” in which celebrities learn about the unknown branches of their family trees.

“I was very happy about that,” David said. “I thought there must have been some connection.”

David did not say exactly how the two are related, specifying only that Sanders is “a third cousin or something.”

David also revealed how SNL cast him as Sanders in the first place. After the first debate between Sanders and Hillary Clinton, David spoke to talent agent Ari Emanuel (of Entourage fame).

“This Bernie Sanders thing,” David said. “During the first debate between Bernie and Hillary, [‘SNL’ creator] Lorne Michaels got emails and calls during the debate, saying that I should be doing Bernie Sanders.”

After the debate, “[WME-IMG co-CEO] Ari Emanuel called me up and said, ‘What did you think?’ And every time I watched Bernie Sanders, I would repeat everything that he said, because I know that I can talk like that. So I started talking to Ari, the agent, I started talking to him like Bernie.” Emanuel then told Sanders to post video of himself doing the impression on the internet. “I said, ‘No, I’m not going to do that. That’s not me. I don’t care.’ Then I said, ‘You know, it would be a good thing for “Saturday Night Live”,’ not thinking in a million years.”

Emanuel, David said, “hung up immediately and called Lorne Michaels, then they were both on the phone 10 minutes later.”

Now let’s pray for a Bernie cameo in Season 9 of Curb Your Enthusiasm.