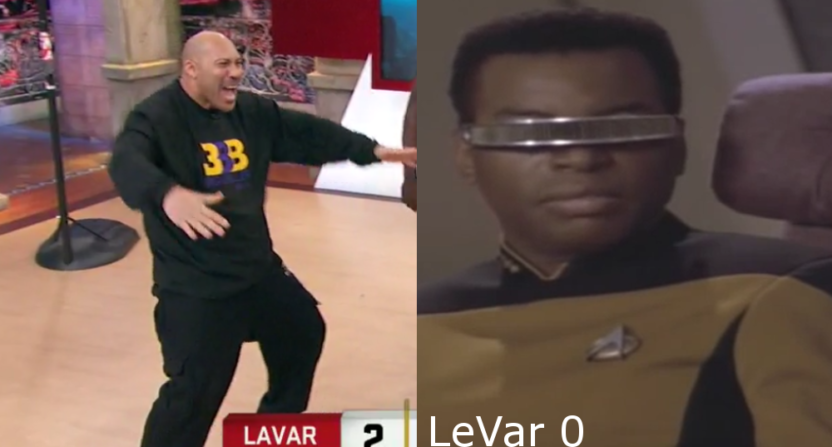 LaVar Ball is a former Washington State basketball player who averaged 2.2 points per game for the Cougars and has since become famous for having talented sons, repeatedly appearing on FS1 and ESPN and in other forms of media to make outrageous claims, creating expensive shoes, starring in a reality show on Facebook, and now taking his act to CNN to discuss his feud with President Donald Trump. LeVar Burton is a famous actor known for his roles on Star Trek: The Next Generation, Reading Rainbow, the 1977 version of Roots and more.

The two don’t have much in common besides a somewhat-similar name, but that’s led to Burton being blasted on Twitter over Ball’s actions and comments before, and that happened on a whole different level Monday and Tuesday following Ball’s CNN appearance. Burton even joked about one particular one that managed to conflate his acting bio with LaVar’s son LiAngelo’s shoplifting charges:

@levarburton You're a has been actor with a thief for a son and Trump is the president of the United States. Get the picture?

One of many sleights I am having to endure these days. Thanks! @Lavarbigballer… #bydhttmwfi https://t.co/uYkoDOV6yZ

And there’s much, much more abuse Burton has taken on Twitter from people who think he’s Ball:

I understand that @levarburton would have been thankful if @POTUS flew his son home on Air Force 1 because that is exactly what he deserved!

@CNN @ChrisCuomo I wonder what you did to piss off your producers that they made you sit through that shit-show of an interview with @levarburton…. what an arrogant asshole!!

The differences between LeVar Burton and LaVar Ball can be explained with the aid of a few clips. Burton played Star Trek: The Next Generation‘s Lt. Commander Geordi LaForge, the engineer who often wound up saving the day:

LaVar Ball is all about selling $495 shoes:

LaVar Ball spent four minutes arguing with Chris Cuomo about who should thank the other first:

LaVar Ball and Chris Cuomo went a full four minutes talking about who was going to thank who first.
This is just first 90 seconds. pic.twitter.com/268Uge7sJF

These two people are not the same, and you don’t need Geordi’s VISOR to see that. Burton is understandably fed up with being confused with Ball. In fact, he was fed up with it back in March, when he went in hard on Ball in an interview with Joon Lee at Bleacher Report:

I was like, “What is going on here?” Then I looked into it and found out who LaVar Ball was, and then I just laughed. He’s a piece of work. He is a one-person PR machine. I guess he’s operating under the premise that any press is good press, but he’s bucking for one of the most reviled persons in sports right now.

…Obviously, the guy is either a master of self-promotion or remarkably deluded, or perhaps both.

…You know what, he’s kind of like Trump. He’ll say anything and then double down on it and defy you to believe him. Just because someone says something doesn’t mean that it’s true. We live in an era of alternate facts. It’s sad, but that’s the world we’ve created.

So, the constant tagging of Burton with criticisms meant for Ball is probably getting on his nerves. But hey, at least no one’s asking him how long it will take to fix it.

And Brent Spiner, who played Lt. Commander Data on ST:TNG, had a pretty funny response for his old colleague:

If you cared about our President, you’d change your name.