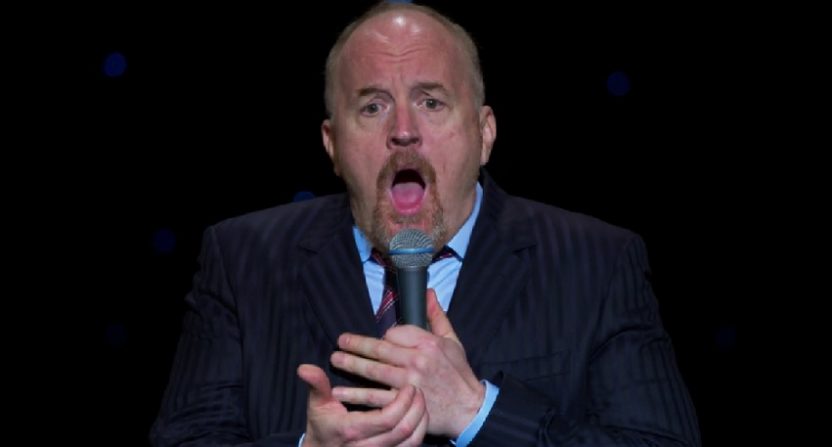 Netflix seemed to make more of an event out of Dave Chappelle’s recent stand-up specials than Louis C.K.’s new show. Of course, Chappelle’s return to stand-up — in addition to wider pop culture — was definitely notable after close to a 10-year absence from stage and television. (Though Chappelle has been performing stand-up for the past four years.)

But Netflix didn’t just float Louis C.K.’s new special out there, either. For one thing, C.K. did the requisite tour of late-night talk shows to promote it suitably. He’s hosting Saturday Night Live. And this time, he could point fans to Netflix, rather than explain why he was posting a comedy special on his own website and charging people five bucks to stream or download it. While that was an admirable experiment and endeavor (one other comedians like Aziz Ansari have since emulated), and C.K.’s fans were more than willing to participate, how many potential viewers did C.K. lose out on by going that route?

A new special from Louis C.K. is indeed an event. He’s been on something of a hiatus himself, with his TV show Louie on “extended hiatus” since its fifth season ended two years ago. Fans and critics were anticipating a new special, loaded to post responses on social media or write up responses and think pieces. The title of his latest show, Louis C.K. 2017, even makes it feel that way, like it’s the Super Bowl or something.

(Just don’t use the Roman numerals, Louis. Nobody likes typing those all out. Unless you want to do it to make fun of yourself, in which case we understand and will laugh when appropriate.)

Something else that makes Louis C.K.’s new show feel more special is that he’s wearing a suit and tie for the occasion. No t-shirt and jeans this time around, which seemed to be his default setting. (He even dressed that way for an interview with Charlie Rose last year, which made me think, “OK, he’s dedicated to that look and isn’t going to change for anyone. I kind of admire that.”) Does that mean Louis is being more serious this time around? Well, maybe. Though he doesn’t get into politics and President Trump, he does take on some big issues and arguably gets a bit academic at one point. C.K. doesn’t really get as personal in this show, joking about his kids and sex life as he has in the past.

In 2017, Louis puts the audience on edge right away, like throwing under a batter’s chin with his very first pitch. “So, you know,” he says, “I think abortion is, um…” To go right there to begin the show is boldly funny, knowing that it will likely make people immediately uncomfortable or ready to turn on him. This is a comedian truly in his element, confident in his material. Can you imagine a novice funnyman taking the stage and kicking off with abortion? Some might try, but C.K. knows his audience is generally going to stick with him.

Besides, C.K. is not making some great stand or statement with his riff on the topic. If there’s one theme to 2017, it’s that Louis is still trying to figure things out. He mentions a couple of times that he’s 49 years old, with the implication being that he is who he is now and doesn’t have time for bullshit anymore. But maybe he also feels some urgency to determine just where he might stand on some thorny issues like abortion, religion, sexual politics, and long-term relationships.

Though he doesn’t come right out and say it, longtime fans of C.K.’s material know how much his two kids mean to him and both are reaching the age where they’re probably asking some big questions to which a parent has to provide some suitable answers. These are the moments and issues that can influence a child’s view of the world and shape his or her beliefs, quite possibly for the rest of their lives.

Again, Louis doesn’t say that while he’s discussing and joking about these topics, but he doesn’t really have to either. Even if he didn’t have kids, this is big stuff that is worth thinking about and maybe forming an informed opinion on before spouting off. Whether or not part of informing yourself is fueled by what C.K. ponders on stage depends on the viewer. Hey, whatever gets you there.

Maybe that doesn’t sound funny and you’re wondering whether or not you’ll enjoy Louis C.K.’s latest special. But c’mon, he’s a comedian and knows what his job is. He finds the absurdity in many of these subjects, poking holes in arguments and beliefs, while perhaps reminding people that he’s a comedian and shouldn’t be taken all that seriously. So when he says “I think abortion is like taking a shit,” he knows how ridiculous that is.

But the point is that he could think that because he doesn’t really know what it’s like, and really shouldn’t have an opinion on the subject. What he thinks doesn’t matter. Men’s views on pregnancy and abortion are inherently selfish. (“I want more… of me!”) The woman who decides whether or not she wants to have a child with you and give the world more of you is who matters.

As usual, C.K. isn’t afraid to go dark. Toward the end of his thoughts on religion — which maybe go on a bit longer than is really funny — and how Christians shouldn’t be so upset about having their beliefs challenged because they clearly won history, C.K. talks a bit about ISIS. In particular, he pokes fun at what many consider the most horrifying tactic of the extremists, beheading their victims. “I think the worst part of being beheaded…” is a brilliant opener. That should be studied by comedians and writers for years to come. How can you not want to hear the end of that sentence? It’s a terrifying, tasteless topic to make fun of, yet he still gets laughs because of how absurd (yet true) his observations are.

C.K. is hardly an old man, but he’s clearly getting to the point of his life where he’s starting to think about the downhill slope. Early on, he jokes that he “likes” life, but doesn’t need it and that the world is full of people who decided not to kill themselves today. Maybe this is as good as it gets. (Honestly, it’s been pretty good for C.K. and he shouldn’t try to convince us otherwise.) It could get worse. Arguably the funniest part of the special is when he talks about marriage, how it’s supposed to be everlasting, and how a man reacts while in heaven after being informed that his wife is about to join him after 20 years.

Louis C.K. also has some questions about homosexuality and it’s intriguing to compare his jokes on sexual identity and gender issues to what Dave Chappelle said in his Netflix special, which many didn’t like (especially regarding transgenders). He’s not as defiant and far more willing to joke about how much internal conflict the movie Magic Mike stirs within him. Some comedians act as if they have all the answers, as if they’re right and don’t quite care if you disagree. C.K. seems willing to meet his audience halfway on most subjects. He doesn’t have the answers and knows we don’t. But acting as if we do is definitely worth making jokes about, and very few do it better.

1 thought on “Louis CK’s new Netflix special isn’t his funniest, but may be his boldest”