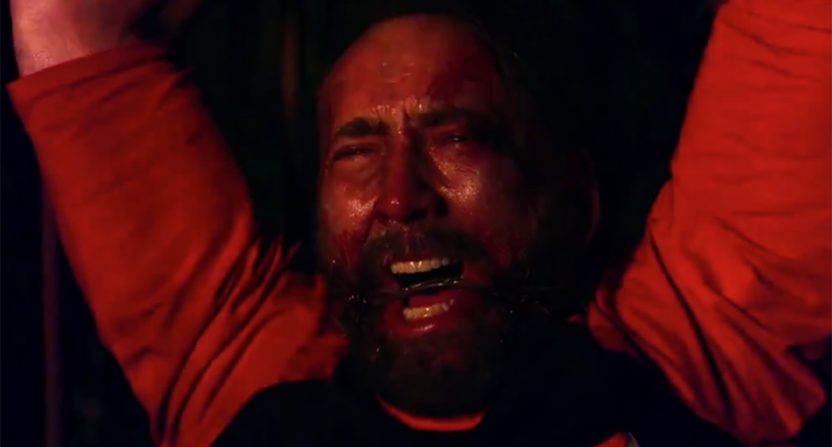 Those were the first words that came out of my mouth after seeing Mandy. It felt like a giant fever dream was presented in front of me, and everyone in the theater needed a second or two to compose themselves.

The film centers around a man who is wholly overtaken by rage confronting and trying to take down a religious sect that has taken everything from him. Taking place in the early 80s in the Pacific Northwest you barely get a sniff of civilization in the movie. It is contained and never lets go of you from beginning to end.

Directed by Panos Cosmatos, he throws everything at you and wants to see what sticks. It isn’t a slight against the movie. You could never describe the film as lazy as each time he gives you a shot of the characters, you see something entirely new. He more than does his job and makes a straightforward story into a visual marvel.

The obvious star of the show is Nicholas Cage playing Red Miller who, for a good half of the movie, is docile and even kind. After a wrong has been done to him, he goes into full-on Cage mode. He is yelling, screaming and doing everything he can to make the audience cheer for him. At my showing, clearly full of Cage fans, each time he took out a bad guy everyone in the crowd cheered. They ate up his corny lines, and they loved everything he did, for better and for worse. It was an experience and the were given the right film for their Cage cravings.

Andrea Riseborough plays the eponymous “Mandy” yet she doesn’t have a lot to do in the movie. One pivotal scene in the film does allow her to use her talents and it shows that there is more to her than a damsel in distress. Linus Roache plays Sand Jeremiah who is creepy and authoritative. He is supposed to be a Charles Manson/Jesus hybrid, and his performance will give you shivers down your spine.

What sets this movie apart is just how damn ridiculous it is while still being a fascinating artistic expression. Moment to moment the tenor of the movie changes. People laughed, they cheered, they winced. It was frankly a whole lot to consume. That is precisely what it is supposed to be. Both visually stimulating and off-putting at the same time; it kept you on edge the entire viewing experience. It was more emotionally draining than anything. The score and soundtrack only add to it by playing a wide array of music but also adding a layer of tension.

Mandy clearly isn’t going to be for everyone. Even describing the movie to my Mom after the fact winced at some of the scene descriptions I laid out for her. It is going to appeal to a very niche audience that enjoys movies that are both inventive and disturbing. Cage fans are going to find this and get their money’s worth just from a few scenes alone. He is going at 1,000 mph throughout and doesn’t slow down. So while you may dispute the actual merit of the movie, you can’t argue that everyone is on their A-game and giving us a hellaciously good product.