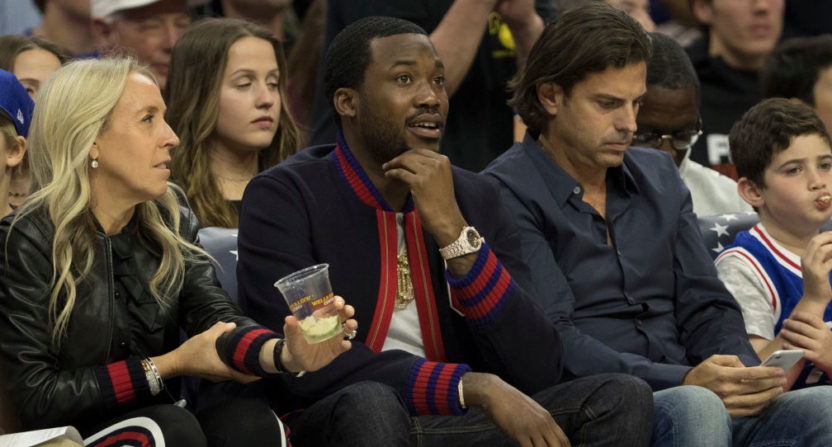 Rapper Meek Mill was sentenced Monday to 2-4 years in Pennsylvania state prison for violating his probation.

The crimes that triggered Meek’s hefty sentence: fighting in an airport and doing wheelies on a dirt bike.

Though it’s easy to laugh at the 30-year-old rapper, make jokes about Drake and shake our head at another celebrity who can’t stay out of trouble, Meek’s sentence is a startling reminder of how the American justice system swallows people up and holds onto them as long as it can. And how it sometimes forgets why it is punishing them in the first place.

This saga began in 2008, when Meek Mill was charged with drug and gun possession and sentenced to 11-23 months in prison. He served eight months, then was released and placed under probation. He was sent back to prison for five months in 2014 after a violating that probation by (gasp!) failing to report his travel plans, before again being released on parole. He was later sentenced to house arrest and six more years of probation after a minor parole violation.

Meek’s legal issues continued in March, when he was arrested for fighting in the Philadelphia airport (The charges were dropped when he agreed to perform community service). In October, he pleaded guilty to reckless driving after doing stunts on a dirt bike in Manhattan. The judge who sentenced the rapper Monday was apparently fed up with having to deal with him. Via the Philadelphia Inquirer:

Common Pleas Court Judge Genece E. Brinkley imposed the sentence on Mill after he was twice arrested this year. In explaining her decision, an exasperated Brinkley recounted for the 30-year-old hip-hop artist the number of chances she had given him over the years and said he had been “just thumbing your nose at me.”

After he is shipped off to state prison, she said, “I’ll be done with you.”

So to recap: Meek committed a somewhat serious crime in 2008, then a series of minor offenses (sometimes purely bureaucratic) in the years that followed, which pissed off a judge enough to “earn him” years in prison.

We won’t get into the full case to abolish parole and probation, but Meek’s situation clearly illustrates the worst of a justice system that controls the lives of not only the more than two million people who are incarcerated in the United States but also the millions more who are under parole and probation. A system ostensibly designed to hold people accountable after they have been released from prison instead punishes them for the tiniest of infractions. American prisons are stocked with not only murderers, rapists and kingpins but also with people who fail abide by senselessly strict terms of release. Incarceration is supposed to be an all-else-fails punishment for the country’s most dangerous people, not a place for guys who fail to report their travel plans or ride dirt bikes where they’re not supposed to.

Meek Mill’s lawyer told the Inquirer the rapper will appeal his latest sentence, as well he should. There is no reason he should continue to be punished — and punished harshly — for a crime he committed nearly a decade ago.

Meek Mill's experience with Philadelphia courts and probation is one of the great miscarriages of justice that no one takes seriously.

Sure, you can argue that Meek should have “learned his lesson” and exhibited irresponsibility by fighting and driving recklessly on his bike. But to suggest that such immaturity should be punished by hard prison time is to both misunderstand the severity of prison and to vastly overstate its effectiveness in reforming people who are hardly criminals to begin with.

When a celebrity winds up in prison, fans yell about injustice and make T-shirts about “freeing” their hero. Oftentimes, those campaigns are silly and ill-informed. But if Meek Mill actually spends years in prison over a probation violation stemming from a case from 2008, anyone paying attention will have a lot to scream about.