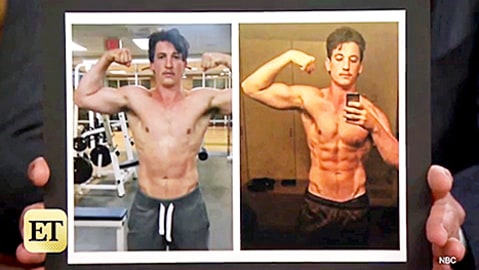 Miles Teller is 29-years-old, yet he’s already a big star in Hollywood. From his role in the critically acclaimed Whiplash to the upcoming Bleed For This, Teller is a big name in the entertainment industry.

Teller’s new boxing movie, Bleed For This, comes out on November 18th.

The movie is based on the true story of Providence boxer Vinny “The Pazmanian Devil” Pazienza, played by Teller. After winning two world fights, a near-death car accident breaks his neck and he’s told by doctors he might never walk again. In a classic Hollywood story, Vinny works with trainer Kevin Rooney (played by Aaron Eckhart) and works his way back to boxing just a year after the accident.

Teller spoke with Business Insider about the movie and his training regiment:

“I was just in a zone. When you’re working and training that much you’re going through a fight camp. You kind of black out almost, the only thing you think about is boxing and this guy. I mean, I went from working out and boxing and working on the accent for eight to nine hours a day to then the movie’s done and you kind of miss that schedule, oddly,” Teller said.

“I actually had not heard about this story. I couldn’t believe that I hadn’t heard about it because it’s such an incredible true story and I’m a pretty big sports fan, but back then boxing fans knew him, but he was pretty specific to the Northeast in a lot of ways,” Teller said.

Once he had heard about it though, it seemed like fate that Teller would play Vinny. When he was just 20-years-old, Teller survived a near-fatal car accident as well.

Regardless of his backstory, Teller is excited about the opportunity to tell Vinny’s story.

“(When Vinny came on set) I kind of wanted to keep my distance because I just felt like he would have been embarrassed by me before I got in shape. I really needed eight months, honestly, to get into the shape and do all of those things and to learn the boxing. So I was really intimidated by Vinny’s legacy and him himself,” Teller said. “But once I got to Providence he was the first person I went to go see and that was such a surreal moment to finally meet the guy that you had been thinking about portraying and been obsessing over. He would come on set a little bit, and that was great. I knew he would be proud of what we were doing.”

Acting is hard enough, but acting in a sports movie that requires you to look the part of a professional athlete has to be even more daunting. Credit Teller for putting in the work.