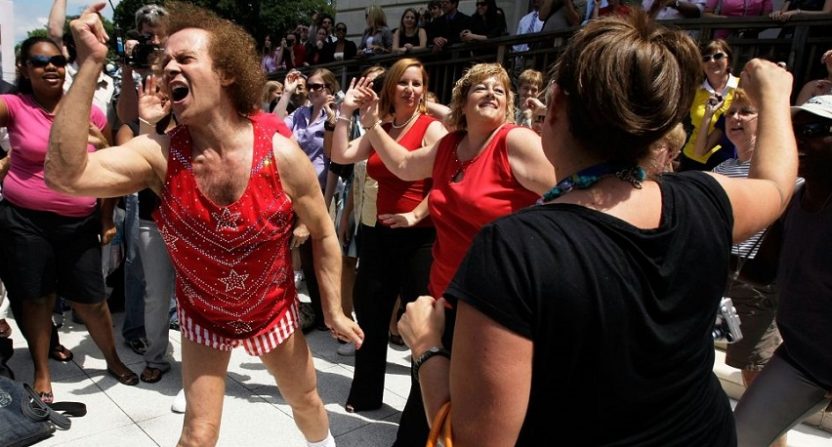 People love to say that it’s hard to find common ground these days in pop culture but the truth is that it’s always been that way. Imagine trying to find a way to simultaneously relate to fans of The Howard Stern Show, Hollywood Squares, The Glenn Beck Program, and General Hospital. You’re talking about very disparate audiences and demographics, with their own interests and appreciations. You’d be hard-pressed to find a person who could bridge those gaps and become a welcome mainstay in each community.

That was the power of Richard Simmons. The energetic, often manic fitness instructor had a way of integrating himself into your tribe with demonstrative ease. Sometimes he was making the jokes and sometimes he was the butt of the joke, but he always seemed to understand the game. Getting to see the human being underneath those loose-fitting workout shorts was a trickier endeavor, but it also wasn’t part of the deal. When Simmons was on your TV or radio dial, he was there to entertain you, whatever that happened to mean.

Simmons’ life is already deserving of introspection. He created a multi-million dollar fitness empire and became an American pop culture mainstay for decades, all the while continuing to hold cheap workout classes at “Slimmons,” the gym he created to begin his career. He’s a mega-rich celebrity who still makes sure to call people he’d met on the street a few times a week just to see how they were doing. Or at least, he did.

In case you hadn’t noticed, and perhaps there’s something to the fact that most of us didn’t, Simmons basically dropped off the planet in February 2014 and hasn’t been seen since. Other than an audio interview he did in 2016, no one has had verifiable contact with him in any way. No phone calls. No appearances. No random sightings in Beverly Hills. Nothing.

Understandably, that made quite a few people curious. One of them happened to be Dan Taberski. A former producer for The Daily Show and Andrew W.K.’s Destroy Build Destroy, Taberski is also a former student of Simmons and knew him well enough that he approached the fitness guru about making a documentary about him just before he disappeared. Sometimes the universe gives us what we want, just not in the way we expected, because that disappearance gave Taberski the perfect question to answer: What happened to Richard Simmons? He’s attempting to answer that question in the new podcast Missing Richard Simmons.

Two episodes in, the show is hitting all of the right notes in its stated goal. Episode one is spent reminding you what a powerful pop culture force Simmons was in the 80s, 90s, and 00s. It also delves into what it must be like to be the kind of person who has no problem connecting to massive crowds, but doesn’t seem to be able or interested in making deep friendships. As the man once put it, “I don’t have a lot to offer to one person. I have a lot to offer to a lot of people.” Ultimately, the scene is set for that fateful day in 2014 when Simmons failed to show up to his daily fitness class and hasn’t been spied since.

Episode two attempts to begin figuring out the answer to “Why?” Did Simmons have some kind of nervous breakdown after the last of his seven beloved dalmatians died? Did a debilitating knee injury that ruined his fitness abilities bring on depression? Did his deep-seated fears of personal relationships tip the scales in the wrong direction? Perhaps most ominous of all, is his longtime maid holding him hostage and controlling his life? An elder abuse tip that required a visit from the police seemed to bring all sorts of fears to the surface.

The basic setup and rollout of the podcast brings to mind the current King of All Podcasts: Serial. The first podcast to really break through into the mainstream, Serial made its mark with an investigation into the murder of a young girl and the facts that put her boyfriend behind bars. Its episodic hooks and genial host prone to spitballing between findings made it catnip for mainstream audiences.

Missing Richard Simmons is using a lot of the same playbook. Taberski brings a laid-back style that flips between information and reveals as well as humorous asides. Every episode seems intent on doling out just enough information to move the investigation forward while leaving you wanting to know what happens next. And clearly they’re building towards some kind of conclusion, even if Taberski makes it clear he doesn’t quite know what that is yet.

That last part, the unknown ahead, also reminds us of Serial but perhaps not in the best way. America’s Favorite Podcast faltered in its second season when it switched gears and put all of the focus on Bowe Bergdahl, currently awaiting trial on charges of desertion. While equally deep in detail as the first season, the second season of Serial was panned for a general lack of interest in the topic. Also considering the outcome of Bergdahl’s ordeal wouldn’t happen by the time the season was over, that seemed to impact the overall effect episode-by-episode. Audiences either already knew the information or didn’t quite care enough to heard about it.

As some people have commented, MRS is like Serial but you actually care about the subject. Unless they’re monsters, they’re referring to season two.

Such is the tightrope that Missing Richard Simmons walks from here on out. At the end of the first episode, Taberski flatly states he hasn’t spoken to Simmons as of yet and the mystery remains just that. Surely there’s a lot of finger-crossing going on over at First Look Media and Pineapple Media that Simmons will resurface at some point during the run of the show. Otherwise, the specter of unanswered questions looms over each impending reveal and discovery. It might excite audiences, but then again it might not after a while when they know it doesn’t lead anywhere.

One way to offset this might be to dive back into Simmons’ life. While the first episode does so in a way to catch everyone up with just how popular and wealthy the fitness instructor had gotten, we still haven’t really gotten into who he was. What was Richard Simmons like a child? What were his parents like? What was it like before he was famous? What was it like when he was at the height of his powers? These are all questions that could not only deepen our interest in the person at the heart of this mystery, but also deepen the mystery itself. Otherwise, like with Bowe Bergdahl, we’re left to our own preconceived notions, which only intrigue us for so long.

There’s also the question looming over all of this: Should Taberski be trying to lure Simmons back into the public spotlight in the first place? Just because he was famous, should we require Richard to be famous once more even if he doesn’t want to? While the notion that he’s being held against his will is the dark outcome a lot of people want even if they wouldn’t admit it, it’s more likely that he’s made a conscious choice to remove himself from the world. That’s a question you’d hope will dominate an upcoming episode, especially if the investigation goes cold.

Despite the concerns of what’s to come, Missing Richard Simmons has been plenty interesting so far. It’s what happens in the next four episodes (only six are planned for now) that will determine whether or not it can hold on to the mantle of “The Next Serial.” Either it will keep providing compelling reveals, old and new, or it will rest on the notion that you care because Simmons is famous and it will recede down the iTunes charts. Ultimately, audiences and fans are rooting for the return of Richard Simmons, be it in the form of one of his iconic TV or radio appearances, or simply by stepping outside to wave. So long as it’s on his terms, one way or another.