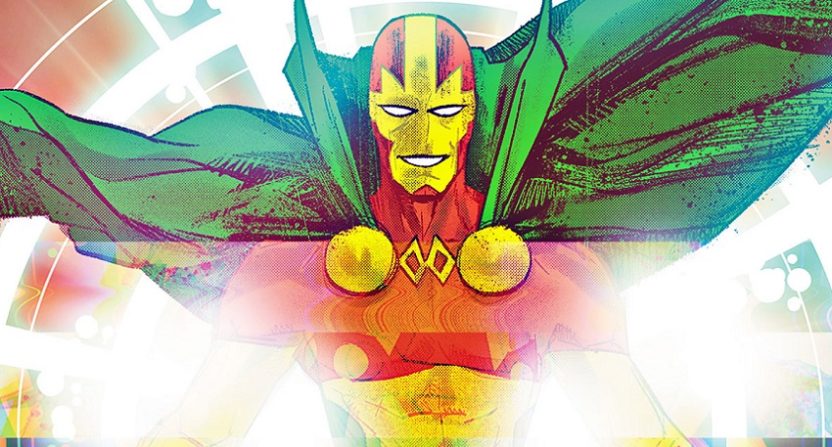 Life is sometimes inescapable. Mister Miracle has yet to achieve his greatest escape: death.

Tom King’s Mister Miracle #1, published by DC Comics, sold out in comic book shops across North America last week. The title generated impressive buzz and critical acclaim while outselling popular titles such as Amazing Spider-Man, Action Comics, and The Flash. Many readers didn’t get a copy of the book because of heavy demand, but DC has already greenlit a second printing.

Mister Miracle is a character from Jack Kirby’s iconic early 70s New Gods mythology, an otherworldly escape artist who gained mainstream popularity by joining the Justice League in the 1980s DC Comics and Justice League Unlimited animated series. Kirby’s creation is a good vs. evil conflict/battle featuring gods in a parallel dimension. This video explains the mythology and characters well.

Is Mister Miracle easier to follow if you’re familiar with the New Gods mythology? You’ll get more out of the book if you’re familiar with it, but should still enjoy the book if you go in fuzzy. King has reimagined the character with a specific focus on Mister Miracle’s alter-ego, Scott Free. The reader’s first interaction with the escape artist extraordinaire isn’t in the paradisal New Genesis of Kirby’s creation. Instead, the story begins with our supposed hero on the floor of a bathroom covered in blood. 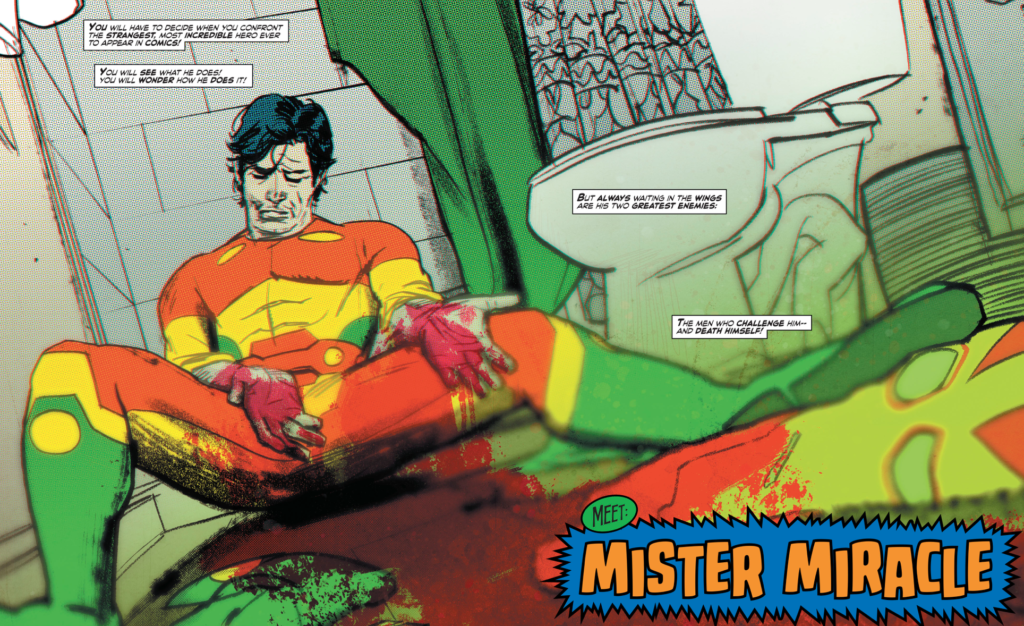 It’s a shocking opening, setting the tone for a tense, sad story about trying to exist in the face of emotional suffering, intrusive celebrity, divine expectations and a war that could threaten all of existence. Free has escaped so much in his life, and is wondering if his greatest trick would be escaping death. Riddled with PTSD, massive media attention as a famed escape artist, and the continued threat of the evil god Darkseid, Free wants to retire the Mister Miracle persona and make his last escape permanent.

But Free simply can’t escape his past. In the hospital, Mister Miracle — his superhero persona — shows up on his bedside TV, boasting of how he can escape anything. After getting released, Free tries to gain some semblance of normalcy, watching crummy football with his wife (and fellow New God) Barda, but is interrupted by his half-brother Orion. The son of Darkseid, raised by the chief of the New Gods, Highfather, Orion is facing his own identity crisis. He bloodies Free with the strict lessons they were taught on Darkseid’s world of Apokolips before Barda fends him off. When Barda tries to comfort him, Free misremembers the color of her eyes. Everything — past and present — is foggy in his view.

King then takes a deeper dive into Mister Miracle’s psyche. The next few pages focus on a television appearance and a great escape. Free is interviewed about his suicide attempt and explains it as just his latest daring trick. He downplays the incident and tries to make the audience believe the incident wasn’t about internal, mental health struggles. It was about attempting an impossible escape. Paired with Mitch Gerads’ intentionally static art (he and King collaborated on the acclaimed Sheriff of Babylon series for DC’s Vertigo imprint), the moment perfectly exemplifies Mister Miracle’s tortured state of mind.

As Free is dealing with his own issues, he’s visited by Highfather, who informs him that Darkseid has acquired the Anti-Life equation and can bend reality to his will. This message is continually relayed to Free with the words “Darkseid is” appearing in random panels throughout the book. Despite the building tension and pending doom, Free is more worried about his own demons. After all, he still talks to and can’t remember losing his manager Oberon to throat cancer. In that moment, Barda reminds him that he’s alone — which he is, in more ways than one.

Orion then sends Free a message saying that Darkseid has killed Highfather and he’s required to suit up and return to New Genesis. As he and Barda get ready to return, he confesses that “everything is wrong” with him and he can’t escape it. Barda slaps him and tells him to keep going as the two prepare to transport to Apokolips to face Darkseid. 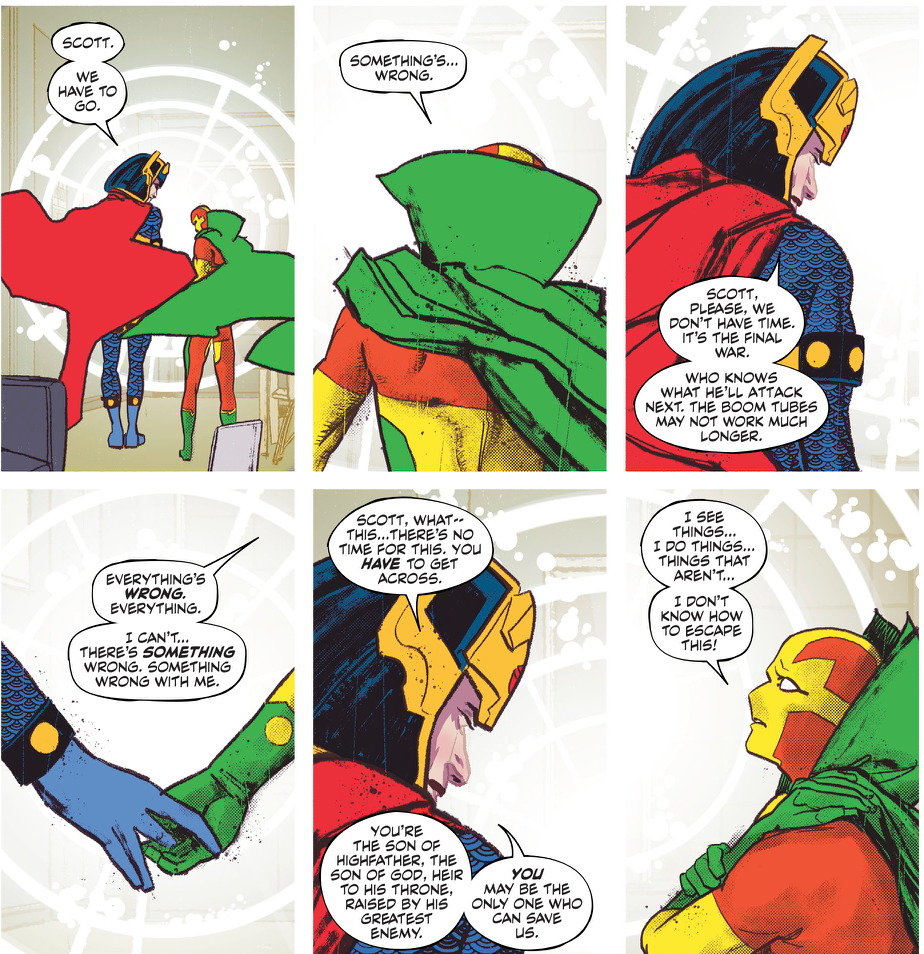 Tom King wrote what is arguably the decade’s best limited series with his work for Marvel on 2016’s Eisner Award winner, The Vision. That book, much like Mister Miracle, deconstructed and somewhat reimagined a known character (who had become more popular with his appearance in the Avengers: Age of Ultron movie) in a Shakespearean tragedy. While the series focused on Vision’s attempt at living a normal, post-Avengers life in the suburbs with his freshly built family, Mister Miracle parallels that idea of normalcy for a character who wants nothing more than to attain it. It’s wrenching.

With sky-high expectations leading up to its release, Mister Miracle delivered and then some. It’s an emotional, tragic tale about trying to live a normal life while everybody else expects great things. Free craves normalcy, but can’t escape his name, celebrity superhero persona, or New Gods blood. Again, King does a wonderful job keeping all of that Kirby lore in the background, so need to worry about doing homework.

If you enjoy complex, unique and deeply tragic tales about a character you likely know little about unless you’re extremely familiar with the DC catalog, Mister Miracle is the series for you. It’s a versatile book which should please new and old readers alike. It perfectly balances shining a light at DC’s past, while presenting them in a fresh, new way. I’m excited to see where the series goes.

Mister Miracle is a 12-issue monthly series published by DC Comics, written by Tom King and illustrated by Mitch Gerads. Issue No. 2 is scheduled for a Sept. 13 release.