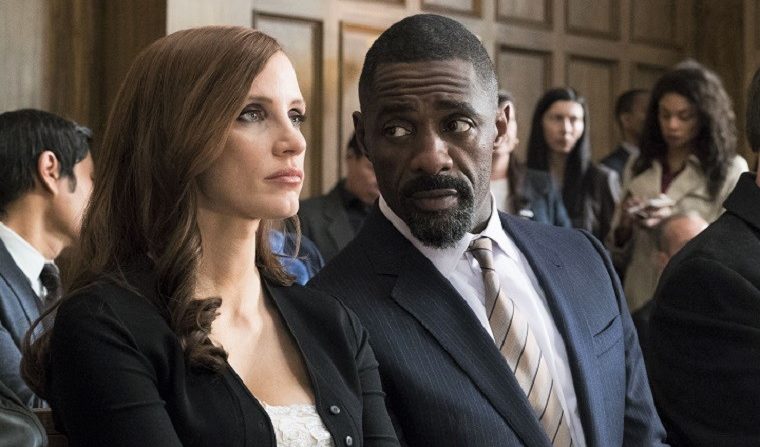 Few things can be more satisfying in watching a movie, TV show or play than watching an actor in a role that suits him or her perfectly. You get to see the performer at her best. Of course, it also helps if the material that actor gets to work with allows her to make the most use of her talents.

Jessica Chastain is one of the best, most compelling actresses working today. She’s reaching the point in her career where virtually anything she does is going to draw awards consideration. Chastain certainly elevates almost any movie she’s in these days, even if it’s not a starring role.

There’s no doubt that Chastain is the star of Molly’s Game. She carries this film, in nearly every scene as the driving force behind a story that might not seem believable if it wasn’t true. Idris Elba may provide some additional star power as the lead male actor in this production, but he is absolutely a supporting player. This is Molly Bloom’s story and Jessica Chastain’s movie. Everyone else involved is just along for the ride.

The dialogue is the action

It will surely surprise no one that Sorkin’s directorial debut is almost entirely fueled by dialogue. This isn’t a movie in which a whole lot of action takes place. (There aren’t even the walking and talking scenes that became a Sorkin signature with The West Wing and Sports Night.) Molly Bloom is someone who sits back and observes, learning all she can about an area with which she was previously unfamiliar and figuring out how to gain a psychological advantage over the people who give her credibility.

Of course, that applies to poker as well. Sorkin does use narration and graphics to explain strategy to those unfamiliar with the game, which is definitely helpful during some dramatic moments. But players are studying one another to look for tells, to guess who’s bluffing, to determine who’s falsely confident or betraying their cluelessness at the table.

As one character says, he doesn’t care about winning the game, he wants to destroy lives. (Though it’s understandable why, the story would have been even more compelling if the real names of the celebrities involved in these games — most of which can be found online — and even the actors themselves were involved in the poker scenes. Maybe it would have been too distracting, but would have added to the power of the story.)

The opposite is true for the lawyer who takes Molly’s case, Charlie Jaffey (Idris Elba). He’s trying to save his client’s life. Actually, he’s trying to save her from herself. But Charlie isn’t an easy sell at first. Molly’s reputation precedes her and he’s not interested in taking on a case for the publicity — especially if it’s bad publicity.

Yet when Molly seeks his help, Charlie is intrigued. He’s trying to figure her out. Could someone so smart have really not realized the criminal element with which she got involved? Why doesn’t she sell out the people who aren’t helping her now? What is she trying to protect?

All of this requires more telling than showing, which runs counter to what most writing instructors and critics advise. Maybe Sorkin even realized this, especially toward the end of the story and a climactic confrontation. Another director might have tried to change that. But Sorkin surely also knows that dialogue is his action. As long as the words are sharp and the pace is crackling, and actors can handle all of the material they need to recite, that provides all the energy his movie needs.

The timing is perfect

In a recent interview with film journalist David Poland, Chastain said that she is increasingly interested in political filmmaking (which is clearly demonstrated with choices like Zero Dark Thirty and Miss Sloane) and she wanted to work with Sorkin because he’s not afraid to be a social commentator in his writing.

Though it couldn’t have been planned that way, Molly’s Game arrives in theaters at an ideal time when the culture has become hyper-aware of how men treat women — especially in the workplace. So much of the harassment and misconduct that occurs is an attempt by men to demonstrate their power over women, over people subordinated to them in a workplace or social situation.

That is absolutely the case for Molly Bloom, beginning at a very early age. She’s driven hard by her father (portrayed by Kevin Costner) to be an Olympic skier (like her brother Jeremy), pushing her body beyond its limits to achieve greatness. Molly fought back the best way she could, challenging her therapist father by denouncing Freud and his perception of women.

After her competitive skiing days are over, Molly is constantly thwarted by men who try to belittle her and prevent her upward mobility. But she’s just too smart to be kept in a corner. She’s learned too much from watching these people attempt to exercise their power and take advantage of those who are weaker. And she doesn’t squander opportunity when it presents itself.

Ultimately, Molly might just be too good. Others admire her savvy, ambition, quick-thinking and people skills, all of which take her a long way. The insecurities of the men she deals with still present significant obstacles. Yet she’s just too determined to be doubted, too tough to be beaten down.

Whether Sorkin and Chastain realized it at the time, Molly is exactly the character we need right now. It’s easy to see why Chastain favored the role. And throughout his career, Sorkin has favored those who challenge the norms. Maybe the two of them were just that prescient in deciding this was a story worth telling.