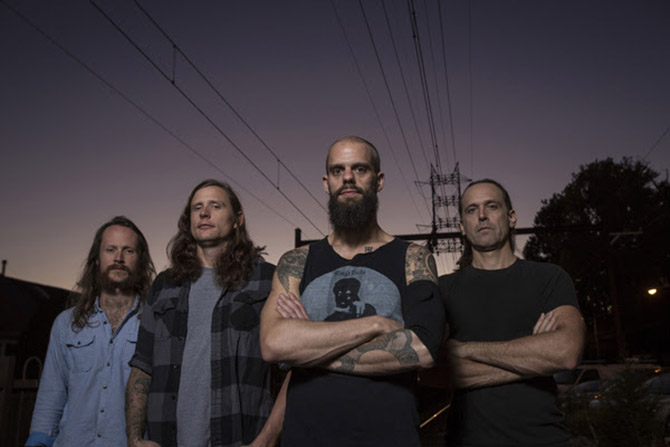 In August 2012, the Savannah stoner rock group Baroness was in the middle of a European tour supporting the album, Yellow & Green, when their bus plummeted 30 feet off a viaduct near Bath, England. In total, nine people were injured (including all four members of the band), but thankfully no one was killed. Lead singer John Baizley spent two weeks in the hospital with a broken arm and leg, and the injuries sustained by drummer Allen Blickle and bassist Matt Maggioni eventually led to their departure from Baroness in 2013.

Baizley and lead guitarist Pete Adams, along with new drummer Sebastian Thomson of post rockers Trans Am and jazz influenced bassist Nick Jost, began touring again. This new quartet spent most of 2013 on the road before Thomson returned to Trans Am for 2014’s Volume X and eventually entered the studio earlier this year to record Yellow & Green’s follow-up, Purple, with long-time Flaming Lips producer David Fridmann.

Purple, released today (Dec. 18), is a juggernaut of an album and an absolutely triumphant return for one of metal’s best groups. The therapeutic effects of writing and recording a new album are clearly evident in songs like “Shock Me” and the album’s first single, “Chlorine and Wine.” While long-time fans of the band will still get their fair share of huge riffs with Purple, it is softer as well and should appeal to a wider range of rock fans than some of Baroness’ previous albums.

Baroness is not the first, nor will they be the last, group of musicians to face adversity and turn it into a great album. Here are four other albums born from tragic circumstances:

The Allman Brothers Band – Brothers and Sisters (1973)
Very few bands have had success and fame marred by tragedy as quickly as the Allman Brothers Band. After almost two years of middling success, the band’s fortunes changed when the July 1971 release, At Fillmore East, became their breakthrough album. But just a few months after the album’s release in October, Duane Allman died from injuries he sustained from crashing his motorcycle into a truck in Macon, Ga.

The group decided to carry on without their leader. They finished recording the landmark album, Eat a Peach, which was started before Duane’s death, and returned to the studio to record their next album in late 1972. During the recording of Brothers and Sisters, the band suffered another blow as bassist Berry Oakley, suffering from depression while also consuming copious amounts of drugs and alcohol, died in a motorcycle accident in November 1972 just blocks from where Duane died a year earlier.

Brothers and Sisters, the band’s first album without Duane, and a move toward a more “country-fied” sound, would stay on top of the Billboard charts for five weeks and features their only No. 1 song, “Ramblin’ Man.” It has sold over seven million albums since its release in August 1973.

Neil Young – Tonight’s the Night (1975)
Danny Whitten was a founding member of Crazy Horse, a band which has been Neil Young’s backing band on and off since 1968, and has appeared on 11 of Young’s albums since Everybody Knows This is Nowhere in 1969. Whitten was also a massive heroin addict which led to him being the inspiration for Young to write one of his better known songs, “The Needle and the Damage Done,” and eventually getting kicked out of Crazy Horse in 1972.

In an effort to help Whitten rehabilitate, Young offered him a spot in his touring band for an upcoming tour in support of Harvest in October 1972. Unfortunately, Whitten couldn’t keep up with the other musicians and Young fired him. Upon Whitten’s return to Los Angeles in November, he died from an overdose of alcohol and Valium. The following August, Young returned to the studio and began work on Tonight’s the Night, which became a therapy session for Young after the deaths of Whitten and roadie Bruce Berry. The album is a dark journey and was shelved for two years before being released in 1975.

AC/DC – Back in Black (1980)
Heavy metal gods AC/DC had garnered a small following through extensive touring when they started work on their fifth album, Highway to Hell, in late 1978. Working with producer “Mutt” Lange for the first time, the group released Highway to Hell in July 1979 and finally had their big break, reaching No. 17 on the Billboard charts and becoming international stars. But just seven months after the release of the album, lead singer Bon Scott was found dead in a car after a night of drinking in London.

The group thought about quitting but decided to soldier on for Scott, and after a few rounds of auditions, they chose Geordie lead singer Brian Johnson to replace him. With Johnson in tow, the band returned to the studio with Lange as producer once again and recorded Back in Black. The album, which contains AC/DC’s standard riff-heavy songs with references to sex, drinking, and rock n’ roll became a massive success worldwide. Since its release in July 1980, Back in Black has sold 50 million albums worldwide, making it the second-highest selling album in history behind only Michael Jackson’s Thriller.

Kanye West – The College Dropout (2004)
For years, Kanye West was a somewhat successful producer itching to sign a record deal of his own. Many labels deemed that his non-gangsta persona wouldn’t lead to mainstream success, so West worked for years on beats for his own album while producing tracks for artists like Beanie Sigel, Foxy Brown and Jay-Z, getting his big break on The Blueprint. Finally, in an effort to keep West from moving to another label, Roc-A-Fella CEO Damon Dash signed West to the label in 2001. A year later, West would be involved in a car crash that almost killed him and shattered his jaw, requiring it to be wired shut.

Two weeks after the crash, West entered a studio and recorded “Through the Wire” with his jaw still wired shut. He first released the track on a mixtape, Get Well Soon…, but its success would eventually lead to his debut album, The College Dropout.

Using the recording sessions as a distraction from his injury, West spent almost two years recording and remixing the album before its release in February 2004. The College Dropout, with its personal anthems about West’s life, would rise to No. 2 on the Billboard charts, sell over three million albums, and move hip-hop away from the gangsta/hardcore persona that dominated it for more than a decade. Another West album, 2008’s 808s & Heartbreak, was a direct response to the death of his mother, Donda West, due to complications from cosmetic surgery in 2007.

A few months after the bus accident that almost cost him his life, John Baizley wrote a letter to Baroness’ fans. In it he said, “There is no better moment than now, broken and in physical stasis, to devote ourselves more fully towards our art than ever.” Artistic output is therapeutic; it helps deal with pain, loss, and sadness. The catalog of artists who decided to devote themselves to art in the face of tragedy is vast and in the process, many of them produced something timeless.