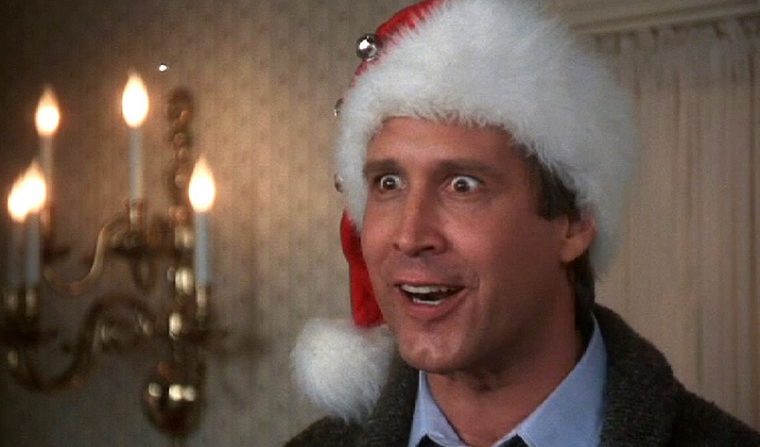 Watching a movie for the first time is often about expectations. We all go into films with preconceived notions about how good — or how bad — it’s supposed to be. When it lives up to the hype, we’re satiated. When it falls short, we feel cheated, even hostile for wasting two hours of our lives.

The rare and wonderful feeling comes when a movie that you thought was going to be awful turns out to be glorious fun. One example that needs to be mentioned at this time of year is National Lampoon’s Christmas Vacation – a film that out-punched its weight class to become a holiday classic.

Few holiday movies or TV shows stand the test of time. For every It’s a Wonderful Life, A Christmas Story and A Charlie Brown Christmas, there are The Santa Clause, Jack Frost and Jingle All the Way. Right now, the Hallmark Channel is running an endless stream of disposable Christmas tearjerkers. (I’m not crying, you’re crying!)

My dads office dressed up as characters from Christmas Vacation… ???? pic.twitter.com/hCOhdfLojb

Christmas Vacation pulls off something simple and yet not necessarily easy to execute. It’s a relatable, funny story about a father obsessed with having the perfect holiday season experience with his family.

If you ain’t down with Clark Griswold (Chevy Chase) in this one, you’re dead inside. You might as well punch a department store Santa in the face, kick Rudolph in the balls and spit in grandma’s eggnog. What’s wrong with you?!?

“[…] the Griswold household is vibrating with the pent-up anxieties and resentments of two sets of in-laws, a thoroughly wacko uncle and aunt, and a hillbilly cousin[…]. None of these people are particularly good examples of the Christmas spirit.”

Some of the negativity was understandable. This was the third National Lampoon Vacation movie in six years Maybe Griswold fatigue set in. How much could one stomach of well-meaning but eternally flawed everyman Clark Griswold bumbling his way through another misadventure? The original – National Lampoon’s Vacation (1983) – smartly poked fun at the great American family road trip. The sequel – National Lampoon’s European Vacation (1985) – wasn’t as clever or memorable. So, when Christmas Vacation came around, most people were bracing for the worst.

But this was different. The backbone for any good film starts with a good screenplay. John Hughes, famous for his teen comedies and the Home Alone movies, was also the brainchild behind the Vacation movies.

This is one of his funniest scripts. It is helped out by good casting, which included future stars like Juliette Lewis (1991 Academy Award nominee for Best Supporting Actress in Cape Fear), Johnny Galecki (2012 Golden Globe for The Big Bang Theory) and Julia Louis-Dreyfus (multi-Golden Globe nominee for Seinfeld and Veep).

Christmas Vacation became the highest-grossing film of the franchise (four movies before 2015’s sequel/reboot), making $71 million. Perhaps one of the movie’s big selling points was that, according to Mental Floss, it was one of only two Christmas movies released that year. (Prancer, a movie about a reindeer not named Rudolph, was the other. Johnny Galecki also starred in that one, believe it or not.)

The movie struck a chord with audience that continues to resonate. Its enduring appeal is extraordinary. Christmas Vacation will be on television several times in December and some theaters will have special screenings. There is even a website selling Griswold gear.

Why does Christmas Vacation work? Perhaps because it holds up a mirror to our own expectations and ideals of Christmas. We all yearn for the perfect Norman Rockwell image of what the holiday is supposed to be: snow, warmth of family, the joy of giving, Christmas carols and peace on earth.

The reality is Christmas is rarely that great American portrait. In most towns, it’s not snowing, family airs long-held grievances, people complain about their presents, Christmas carols get on your nerves from overplay, and it’s hard to feel peace on earth when there is so much turmoil in the world.

Ellen Griswold sums it all up perfectly: “I don’t know what to say, but it’s Christmas and we’re all in misery.”

Christmas Vacation feels your pain. But in true American spirit, it sees these problems and yet remains hell-bent on providing tidings of comfort and joy. The embodiment of that can-do spirit is Clark Griswold in the defining role of Chevy Chase’s otherwise pedestrian acting career.

Griswold is the father we can all see being our own. He’s earnestly trying to have a wonderful Christmas, but is continuously undone and undermined by a comedy of errors. But Griswold never lets minor obstacles deter him. When you’re a father, you do everything you can for your family.

The movie’s basic plot is that Griswold is going to surprise his family by announcing that he is going to build a backyard pool with his Christmas bonus check. But for reasons that will later become clear, he has yet to receive his bonus. Meanwhile, he anxiously awaits extended family members arriving to add to his stress, including Cousin Eddie.

Don’t knock Cousin Eddie. He plays a vital role in advancing the plot.

We are speaking with Jeff in La Mirada. He's a HUGE fan of National Lampoon's Christmas Vacation and decorated his house exactly like the movie! pic.twitter.com/cXJtmKCXpX

That’s the nuts and bolts of it. Nothing byzantine. The movie is a nice blend of gags, one-liners and ridiculousness. It all builds up to an epic meltdown – one of the best rants in movie history.

Griswold nails the dismount here. You wonder how many takes it took for Chevy Chase to get this one just right.

The movie ends predictably. No surprises. Griswold tries his best to make the holiday memorable for his family. And somewhat indifferent children, irritating relatives, a terrifying squirrel and a heartless boss aren’t going to stand in his way.