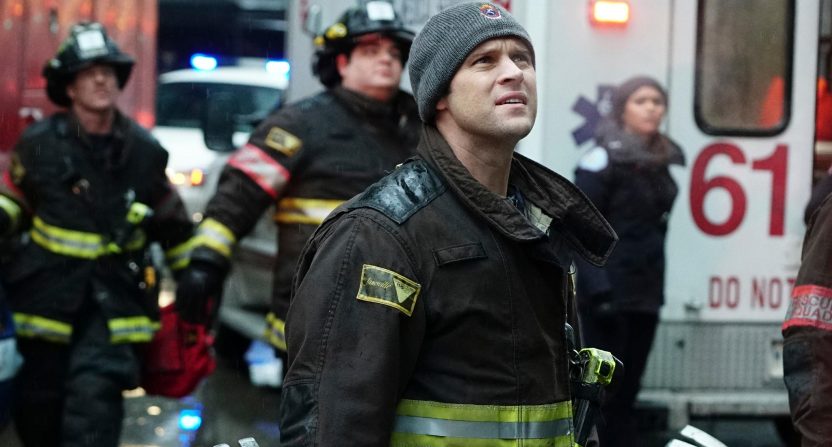 Dick Wolf is the executive producer for Chicago Fire, but he made his living off NBC procedurals like Law & Order, which in the ’90s was full of episode plots advertised as “ripped from the headlines”.

This was not uncommon for procedurals. Shows like House and others would sometimes borrow plots from real-life incidents as well.

That was similarly questionable, as when House centered an episode around a tragic example of mistaken identity on a following a car accident in Indiana. (And according to Wikipedia, CSI: New York and Body of Proof also did episodes based on that plot.)

In general, serialized dramas can stretch one or two main story arcs over an entire season, procedurals require a different episode-of-the-week plot. So writers seeking to both take it easy and stir up some interest grab news stories that might fit the show, oftentimes adding a twist or two to the story the public knows.

As an example, another Dick Wolf NBC procedural, Chicago Fire, will air an episode on March 1st revolving around a plot similar to the Ghost Ship warehouse fire that killed 36 people in Oakland.

Here is the episode description:

Truck and squad are called to aid in a massive all-city response when an old, ill-equipped factory-turned live/work space quickly turns into a firestorm, trapping countless unsuspecting victims. The dire situation quickly turns personal when it is discovered that one of Chicago PD’s own has a family member at the scene.

Yeah, that’s pretty obvious, but if you want something that really drives home the comparison, check out this casting call for extras for the episode:

“GHOST SHIP” — Seeking Men & Women 20s-30s to play rave party goers. Types can range from edgy/artsy to bohemian *DISCLAIMER* This is A VERY ACTIVE SCENE that entails running and screaming as party goers try to escape a warehouse fire. THIS WILL BE USED AS SURVEILLANCE VIDEO FOOTAGE in the episode.

Yikes. Haven’t we moved on from this sort of thing? Twenty years ago (even ten) we’d get the stories of the news, but there was still a bit of a disconnect. It’s different when you read about a fire in the newspaper as opposed to seeing images and video and having access to interviews with survivors.

It’s not necessarily more or less objectionable now than it was then, of course. (For the record, I come down on the side of “quite objectionable”, since these were real people that really burned to death in a tragedy just months ago, and NBC is turning a profit off that event in stomach-turning fashion.)

It’s just that there’s so little need for a fictionalized version of events now, when we know the actual stories so well.

That was readily apparent when FOX’s 24 used actual footage from a terrorist attack in Kenya on a recent episode. They’ve been forced to apologize, because unsurprisingly, people recognized that shit.

The situation was part of its fictional plotline, but the footage was real, as gunmen opened fire at the mall and crowds fled in panic.

A Fox spokesman said, “I can confirm the footage was of the Nairobi attack and the producers very much regret using it to depict a fictional act of terror on the show.”

This is even worse, obviously, but at least FOX realized their obvious mistake and apologized for it.

Hopefully Chicago Fire figures this out, though at this point it seems unlikely the episode will be pulled.

But hey, Dick Wolf seemingly hasn’t had any trouble sleeping so far.