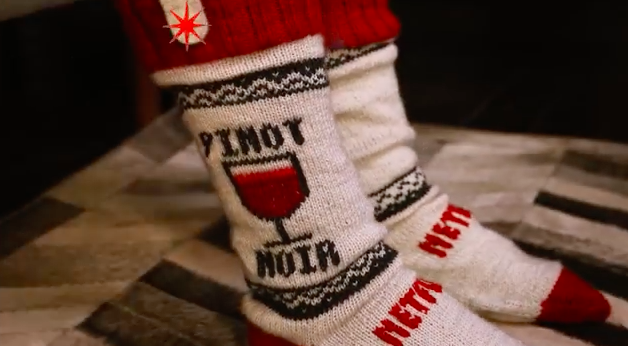 If there’s one culture fad that might define this millennial generation, it might just be the Netflix binge watch.  There’s few things that people seem to enjoy more these days than spacing out on your favorite couch or in your favorite recliner, cutting off all communication to the outside world, and becoming a Netflix zombie who watches 47 consecutive hours of episodic television series.  My binge watch of Breaking Bad has to rank right up there with the Saints winning the Super Bowl and my wedding day as the most memorable moments of my life.

Now Netflix is taking the binge watch to futuristic levels that seems like it’s either straight out of The Onion or one of those weird sci-fi predictions into technology of the future.

Netflix has invented a pair of socks.

Admittedly, that seems a little peculiar at first glance.  However, these aren’t just any old pair of socks mind you, but socks that actually pause your Netflix stream when you fall asleep.  Here’s how they work via AdWeek:

We’ve based our sleep detection system on a popular method called actigraphy. An accelerometer detects when you’ve stopped moving for a prolonged period of time and triggers a signal to your TV that pauses Netflix. When it detects that you’ve dozed off, an LED light in the cuff of the sock flashes red, warning that the pause signal is about to be sent to your TV. Any motion will stop it from firing.

First of all, I would have gone with Kevin Spacey’s mug over a glass of pinot noir.

Second of all, there’s one small catch… you can’t actually purchase the socks.  You have to make them yourself.  Netflix has opened up a website here that gives you a brief tutorial on how to put the socks together.  It’s a little strange because I can’t imagine the cross-section between “amateur electrician” and “Netflix fan” is too wide of a net.  Not everyone who’s a fan of Unbreakable Kimmy Schmidt has extra accelerometers lying around.

I’d be curious to know if there are actually any Netflix binge watchers out there who are so hardcore that they feel the need to invest the time and energy into making Netflix Socks.  I mean, we’re talking about the slight inconvenience of restarting a show or a movie at the last point you remember before falling asleep, which may be the biggest of all #FirstWorldProblems.

The fact that we have the technology to do this is pretty remarkable, but I think a more practical use might be keeping Mike Francesa awake for his radio show.