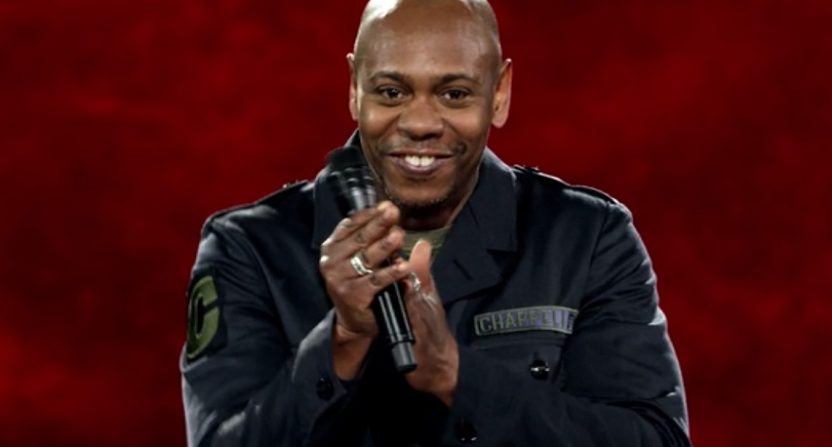 The advent of comedy podcasts has lent more insight to the process of creating material than any interview or feature piece probably could. Many of us likely think we could hop on stage, riff a few jokes, and gets some laughs. But putting together a stand-up comedy routine is hard. Ask a comedian how happy he or she might be when they have 15 minutes of material that they think could work on stage. Then ask him or her how long it took them to craft those 15 minutes.

That’s what makes Dave Chappelle rolling out two stand-up specials for Netflix particularly impressive. Those two shows, “The Age of Spin” and “Deep in the Heart of Texas,” make up more than two hours of comedy. Chappelle doesn’t recycle jokes across both specials, either. There might be a few similar themes — Chappelle’s conflicted feelings on Bill Cosby, his efforts to understand gay people, the current plight of the black man in modern America — but each show stands on its own with a distinct set, one filmed in Los Angeles, the other in Austin, Texas.

Some might sneer and say Chappelle has had 10 years to think of material for his return to the stage, but it doesn’t work that way. To connect with an audience and resonate, stand-up has to be current. The comedy has to represent the time it’s in. Sure, some jokes and routines can be timeless. Funny should ideally stay funny through years and decades.

But if Chappelle took the mic and started talking about Sarah Palin, the iPad, or disappearing flights, it might feel like he just came out of cryo-freeze and caught up on the past 10 years in a Matrix-style room full of TV monitors. Chappelle’s return to stand-up and public life would still be an event, but a comedian who seems out of touch wouldn’t stay popular very long.

Fortunately for him, there are some developments that continue to be significant issues, such as police shootings, racial profiling, race relations, the threat of terrorism, social media-fueled outrage and domestic violence. (He has a lot to say about the Ray Rice video, which may come off as slightly dated.) Current events and topical observations aside, there are always sex jokes to be made. And Chappelle isn’t afraid to get bawdy at all. The only people that might surprise are those who remember an 18-year-old Chappelle breaking into stand-up with jokes about delivering pizzas and Batman getting carjacked. Obviously, he’s come a very long way.

Despite Chappelle mentioning his 10-year absence from the culture in the first special, he’s been back performing regularly since 2013. So he hasn’t just been hiding on his farm in Ohio, living a reclusive life with his family among white people after fleeing from fame and popularity.

But old stories can become new again, which Chappelle takes advantage of during his L.A. set. O.J. Simpson became prominent in the culture again with FX’s The People vs. O.J. Simpson mini-series and ESPN’s O.J.: Made in America documentary. Chappelle is likely referring to the FX show because of its outlandish bent and focus on the celebrity culture it ignited, but O.J. becoming relevant again gives him the opportunity to talk about the four times he met Simpson, sprinkling them throughout the set.

The first time was before 1994, while the other three encounters occurred after Simpson became the most infamous figure in America. Each time, Chappelle captures what made O.J. such a popular and beloved figure, yet also jokes about something sinister underneath it all. Overall, the stories are a reminder of just how long Chappelle has been doing comedy, but he also uses those recollections to explain how much has changed for him during the past 20-plus years.

In both specials, Chappelle frequently pokes fun at living a much different lifestyle now, going to gallery parties and sending his kids to private school. Comedians often benefit from being relatable, talking about habits and issues that most everyone can connect with. Yet Chappelle is more than willing to ridicule himself and how his success has made him very rich and very famous. He jokes about getting out of traffic stops without a ticket or his kids being able to sell sandwiches he took a bite from because he’s Dave Chappelle.

If you’re a longtime fan of Chappelle’s comedy, it’s intriguing to see him adopt the persona of a rich guy who doesn’t have to worry about a lot of the stuff regular people do in his material. His cluelessness about things like rolling up to his son’s private school in a Porsche, blasting hip-hop and smoking a cigarette is hilarious in itself. But it’s also refreshingly honest.

Chappelle isn’t pretending to be somebody else. He’s not trying to fool the audience or himself into thinking that he’s the same man he was 10 years ago. But like so many of us, he can be awed by those with greater talent and gifts than him, such as the many athletes (Floyd Mayweather, Manny Pacquiao, Steph Curry, Caitlyn Jenner) he mentions throughout his sets. he’ll also remind you that as a black man in America — even one as rich and famous as him — there is plenty to keep him grounded and humble. And if it’s not racist treatment by police and ignorant fans, his son’s love of Kevin Hart provides a whole other dose of humility.

“The Age of Spin” and “Deep in the Heart of Texas” might not be the best Chappelle stand-up specials you’ve ever seen. (“Killin’ Them Softly” (2000) might be at his best, though he actually hasn’t recorded that many specials. How much of his fame and reputation is now derived from Chappelle’s Show?) But the depth and variety of material is certainly a testament to just how talented a comedian and cultural observer Chappelle is.

When he ends each show, it almost feels like a surprise because it feels like he could just keep going. Better yet, you want to keep listening. Hopefully, Chappelle doesn’t take another long break. These specials and his recent SNL appearance remind us just how much his voice and comedy are needed right now.