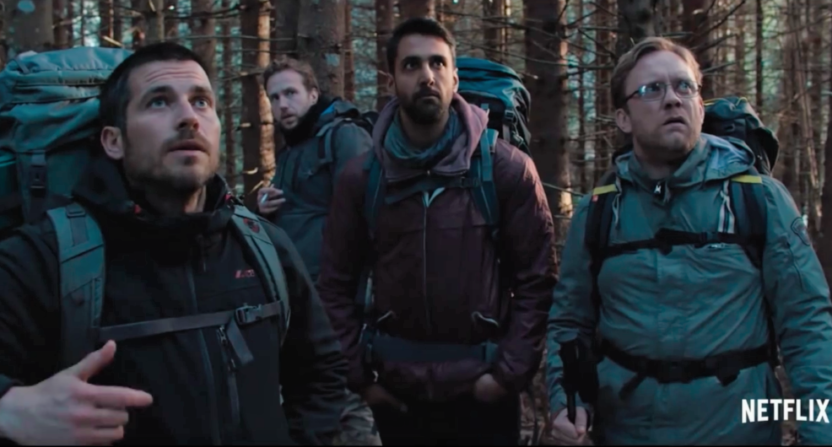 Netflix has come under fire recently for being perceived as the new dumping ground for the kinds of films that used to be direct-to-DVD releases. The disappointing Cloverfield Paradox rode a wave of Super Bowl promotion buzz for a few hours before it was revealed to be a ho-hum sci-fi yarn that was all sizzle and no steak. Before that, the streaming service had been fattening up on so-so fare that movie studios were more than happy to pass on over concerns about disappointing box office or soul-crushing critical reviews.

This seems especially true in the sci-fi/horror department, a genre already prone to overhyped schlock. It didn’t help matter that their own overhyped fantasy release, Bright, was a complete mess that did little to assuage people that Netflix understands what it’s doing.

Still, sci-fi and horror are also genres in which, even when you’re not trying, gems can slip through and surprise even the most jaded viewers. Because those genres are so loaded with films that put all their focus on CGI and gore, good movies that tell interesting stories and play around with themes can shine through just by existing.

The Ritual, which premiered on Netflix over the weekend, isn’t going to take home any awards, but it stands out from the pack as a horror film willing to play around with worthwhile ideas while also trying to scare your pants off.

Five friends gather at the local pub for what is becoming an ever-infrequent gathering between them as they get older. The topic of discussion, where to celebrate an upcoming birthday, continues as Luke (Rafe Spall) begs Rob (Paul Reid) to join him in a convenience store on the way home to buy a bottle of booze. That fateful decision leads to Robert’s death when they unwittingly stumble on a robbery in progress.

Fast-forward six months and Luke, Hutch (Robert James-Collier), Phil (Arsher Ali), and Dom (Sam Troughton) follow through on plans to hike a trail in northern Sweden’s Sarek National Park, partly in Rob’s honor. When Dom injures his knee, they decide to take a shortcut through a heavily wooded area. As often happens in these situations, creepy and disturbing things start happening shortly thereafter.

The premise is simple; you’ve probably seen countless films that have used that kind of construct before. And it’s not as though The Ritual breaks the mold in any real sense. However, the David Bruckner-directed film makes a very conscious decision early on to make everything that happens a reflection of the inner turmoil tearing Luke apart. While so many other horror movies often sideline thematic and character issues in the name of blood and guts, this one constantly reminds you of how awful Luke feels about what happened, that he blames himself for his cowardice, and that his fears have been a life-long affliction that may just be his downfall.

The Ritual is quite literal in that respect. The monster at the heart of the conflict here is undeniably meant to be a representation of the emotion of fear. It’s pretty much that simple. There is some Norse mythology and plenty of disturbing imagery in play to give it an interesting backstory, but ultimately it’s as if Luke and his friends are being stalked by fear itself and their ability to overcome it determines who lives, who dies, and who spends eternity worshipping at its feet (literally).

It’s a simple idea and maybe too simple for some viewers, but the road to hell is paved with overly complicated horror films. Sometimes the simplest ideas are the most effective. It Follows, The Strangers and The Babadook all come to mind. Simplicity allows films like these to actually poke and prod your brain with ideas while paying off the blood and gore.

Rafe Spall (Black Mirror, Prometheus) has quietly (at least in America) put together a solid resume of roles that are setting him up for future stardom. James-Collier, who is best-known as duplicitous footman Thomas in Downton Abbey, gets a chance to break free from the character and show off some potential as a leading man down the road.

There are pitfalls to the strategy the film takes. Because so much of the focus is on Luke, his trio of friends are basically doomed to be “red shirts” instead of fleshed-out characters. Phil, especially, never rises above “the fourth one” in terms of character development. With Hutch, it feels like there’s at least one scene missing where we get our hooks into him just enough for the impact of his story to hit us harder. As for Dom, he gets something of a character arc but a key emotional moment late in the film doesn’t quite land as it should because we didn’t get enough setup earlier.

That aside, The Ritual follows through on its premise. If you’ve seen the trailer, you pretty much get what you hope to out of that story and that’s not a complaint. So often a film like can fail to live up to the trailer or the poster, but the palpable dread and strong focus on theme keeps The Ritual on brand and provides a satisfying character throughline. It also leaves you wondering just how in the hell anyone is going to explain what happened here after the fact.