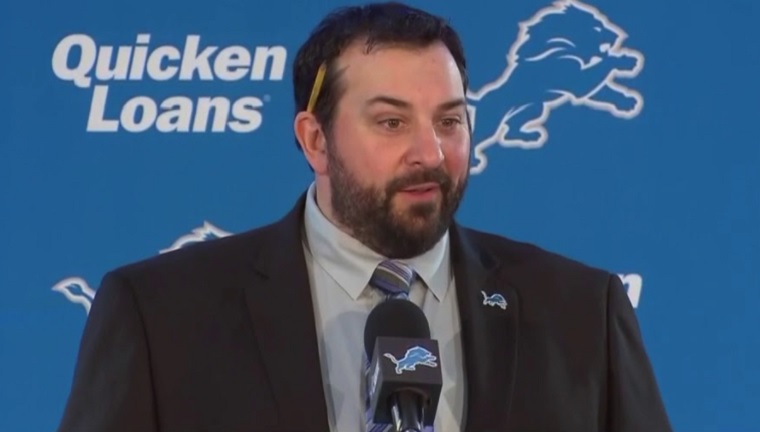 Matt Patricia has had a busy week, beginning with coaching the New England Patriots in their Super Bowl LII loss to the Philadelphia Eagles on Sunday. That was quickly followed by revealing possibly the worst-kept secret in the NFL, which was Patricia becoming the new head coach of the Detroit Lions.

The team officially announced Patricia’s hiring on Monday and on Wednesday, the new coach had his introductory press conference with the Detroit media. With his obligation to the Patriots finished, his introduction complete, and the task of assembling his new coaching staff ahead, Patricia could probably go for a break this weekend. How might he relax? According to him, he could just lock himself in a room and watch Star Wars.

MLive’s Kyle Meinke talked to Patricia after his press conference (and many interviews with Detroit media outlets) and asked him what he wanted when things slow down. You might guess that he’s going to watch film on his new team with his new boss, general manager Bob Quinn (also formerly of the Patriots, who signed a contract extension with the Lions on Friday). And yes, he’s surely done that a few times already.

But what he really wants is to travel to a long, long time ago in a galaxy far, far away.

“I want to sit down in a giant room all by myself and watch ‘Star Wars,'” he told MLive that night.

Turns out, the new Lions coach is a huge “Star Wars” nerd.

Patricia went on to explain that he still has a Millennium Falcon hanging up in his room at his parents’ house. No word on whether it’s a model or the original toy from Kenner. Speaking of those toys, he also still has his old Star Wars action figures from the 1970s. And he was a real fan who played with his toys instead of keeping them in the packages thinking about how much they’d be worth someday. Now his son plays with them too.

“Dominic was like 4 or 5 when he found them,” Patricia said, referring to his son. “So here he is running around my parents house with all my ‘Star Wars’ figures from the ’70s. I still have the vintage ones, you know. And I was running right behind him, and it was just like the most bizarre thing.”

Is it possible that Patricia’s defense was so bad during the Super Bowl because he was distracted thinking about rumors that the trailer for Solo: A Star Wars Story would debut during the big game telecast? It probably can’t be ruled out, but Patricia insists he doesn’t want to know anything about that movie.

Besides, he has some catching up to do. He still hasn’t seen Rogue One or The Last Jedi. Disney and Lucasfilm are not helping him out by releasing these movies in December, when professional football coaches are kind of busy.

There’s more in Meinke’s article about how Patricia and his son have bonded through Star Wars. But it must be known that Patricia says he constantly looks stuff up on Wookieepedia to fill his son in on characters and stories beyond the original movies. That’s right: Patricia doesn’t just resemble a Wookiee when he lets that beard grow (which he shaved for the Lions’ presser); he is reading Wookieepedia.