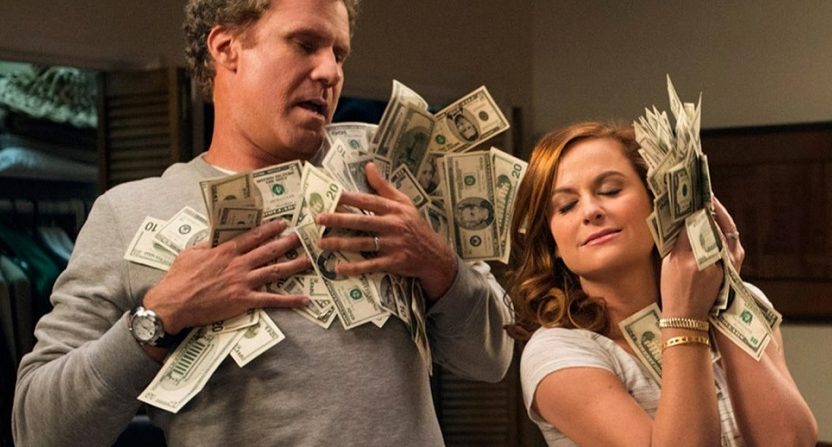 We still have plenty of summer to go after the 4th of July holiday, but the chances of us getting a good comedy during the season are looking increasingly bleak. Baywatch, Snatched, and Rough Night were all disappointments. But a comedy with Will Ferrell and Amy Poehler could save Summer 2017 for comedy, right?

Yeah, not so much. Given the talent that’s in The House, it could be argued that this is the most disappointing movie of the year. In addition to Ferrell and Poehler, Jason Mantzoukas (The League, Brooklyn Nine-Nine) gets third billing in a cast that includes Nick Kroll, Allison Tolman, Rob Huebel, Michaela Watkins and Cedric Yarbrough. (Comedian Kyle Kinane also has a small role, which will surely disappoint anyone who’s a fan of his stand-up work.) With a collection of funny people like that, director Andrew Jay Cohen could probably just turn on the cameras and let his cast create comedy magic on their own.

Unfortunately, it seems like that’s exactly what Cohen did here. There’s no sense of flow or reason to The House. It’s just a collection of scenes with ridiculous behavior and circumstances, or a handful of actors trying to find what could possibly be funny in a particular scene. And most of the time, they fail. The script has more of a premise than a story. Ferrell and Poehler play parents whose daughter is off to college. But when they can’t afford to send her to the school she loves, they resort to unusual means to try and collect enough money for her tuition in a very short time.

The world of this movie is supposed to be absurd, an exaggerated version of suburbia with lawyers who just made partner, investors who cashed in and got to retire early, divorcees who are angry at everyone, and a city council who doesn’t give a shit about anything except their own projects which are ultimately destined to line their own pockets, rather than aid the community they’re supposed to be serving. If you accept that, then maybe The House will be funnier to you. But I just couldn’t get there.

Ferrell and Poehler aren’t anywhere near believable as parents of a bright high school graduate who doesn’t even seem to be related to them. Maybe that’s part of the joke. These characters aren’t supposed to have their shit together. Scott Johansen (Ferrell) has an aversion to numbers and math that should amuse anyone who got through college (or life) and managed to avoid math. Kate Johansen (Poehler) is a former party girl who gives the couple the edge it needs to enjoy having fun. I don’t think it’s ever mentioned what either of them do for a living, not that it matters. Both are abnormally besotted with daughter Alex (Ryan Simpkins), however, who’s more their best friend — they watch The Walking Dead together — than their offspring.

Mantzoukas is vital to this movie as neighbor Frank, bringing some manic energy that elevates the absurdity of what little story exists here. As the script is written, the Johansens can only take this narrative so far. Frank’s wife has left him, he’s lost his job and his house is about to go into foreclosure. A gambling problem is blamed for all of Frank’s problems, but that conveniently makes him an expert in the solution he proposes to Scott and Kate: running a casino out of his house that mostly serves their bored neighbors who want to get the hell away from their families and home lives, and get a little feel of Vegas in suburbia.

Given that Frank is supposed to be destitute, it’s never explained how he can bankroll all of the tables, decorations, booze, and employees for his underground casino. There’s a hint that he’s some sort of financial whiz, or at least he’s very good with PowerPoint presentations, and maybe he’s spending all of his money before turning it over in a divorce settlement. That’s probably putting way too much thought into it, certainly more than Cohen and co-writer Brendan O’Brien — who wrote two funny Neighbors movies — seemingly put in their script. As the casino becomes more like a high-rolling gambling venue, with massage and stripper rooms, the entire circumstance becomes more ridiculous — and yes, probably more funny.

Yet as Scott, Kate and Frank get pulled deeper into their illegal gambling business and adopt the personas of organized gangsters, The House doesn’t quite go as far as a smarter comedy could. The funniest scene in the movie is when they punish a customer for cheating, which is unfortunately given away in the later trailers, like De Niro would in Casino. But a plot thread with a real criminal element, represented by Jeremy Renner’s all-too-short appearance in this movie, could have made this more than a wacky comedy. Like what if this casino was infringing on some mob territory in the suburbs? Ultimately, however, it’s easier to let Will Ferrell do his thing and that’s really what the people want to see anyway. (Hell, that’s why I wanted to see this movie.)

Other than maybe the punishment scene, there is nothing here that you’ll remember after seeing The House. This is a movie that makes for a “Hell, why not?” choice on video, streaming or cable for a Friday or Saturday night. And you’ll probably laugh because there are some amusing scenes and lines. But they’re not hilarious, which is kind of the expectation with the talent assembled. Instead, everyone feels like they’re trying really hard to make something work that just doesn’t. Just turning on the camera and asking funny people to do their thing isn’t always the best solution for a comedy, as it turns out.