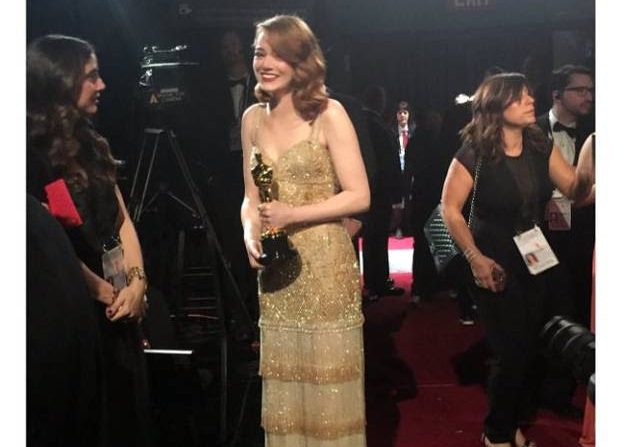 As the world wonders how the Oscars made the wrong announcement for which film won Best Picture, some of the pieces in the story are now beginning to come together.

The story is not making accounting firm PricewaterhouseCoopers, who oversaw the voting process, look good.

From the Wall Street Journal (behind a paywall): we get this account of what happened:

Brian Cullinan, one of two PwC partners holding envelopes with the name of Oscar winners, tweeted ‘Best Actress Emma Stone backstage! #PWC’ along with a photo of the actress at 9:05 p.m. Pacific Time. That was approximately three minutes before Warren Beatty and Faye Dunaway walked on stage to present the award for best picture.

Mr. Cullinan gave Mr. Beatty the envelope that was supposed to contain the name of the best picture winner, people close to the production said. In reality, however, Mr. Beatty was given a duplicate copy of the envelope containing Ms. Stone’s name as best actress. As a result, Ms. Dunaway mistakenly named ‘La La Land’ in which Ms. Stone starred as best picture.

And, suspiciously, those tweets from backstage are now deleted. Cullinan’s twitter bio says he is “counting Oscars ballots and keeping secrets”. One or both of those things didn’t happen last night. 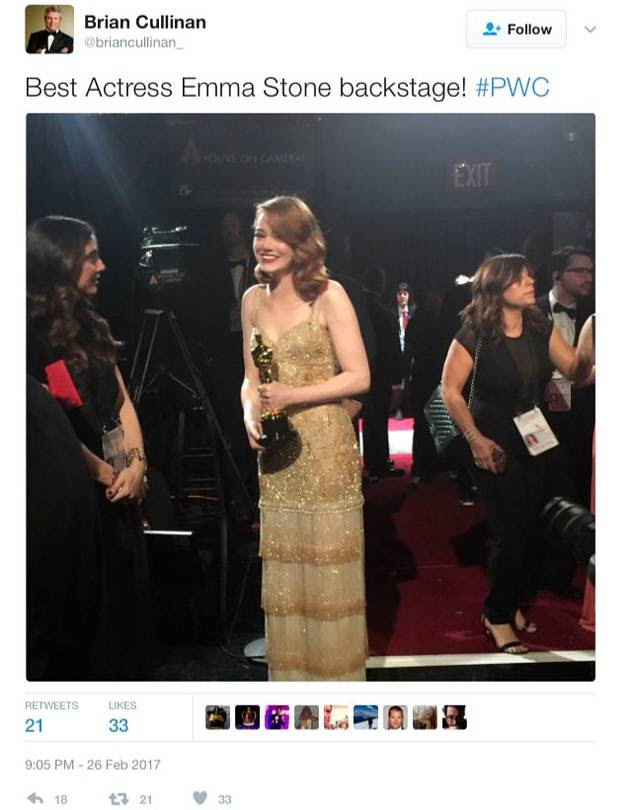 PwC released a statement on Monday morning, which didn’t say much of anything.

“The presenters had mistakenly been given the wrong category envelope and when discovered, was immediately corrected,” the firm said in its statement. “We are currently investigating how this could have happened, and deeply regret that this occurred.”

Cullinan was one of two PwC employees who held copies of the 24 envelopes containing the winners, and he said in an interview last week that he and Martha Ruiz, the other PwC rep, are the only two people in the theater who know who has won the awards.

And things are not going well at PwC this morning, as one of the four major accounting firms now has a massive crisis on its hands.

“Not since Janet Jackson and her wardrobe malfunction on the Super Bowl have we seen something quite as glaring as this snafu,” said Andrew D. Gilman, chief executive of the crisis communications firm CommCore Consulting Group told the New York Times.

After the incorrect winner was read out, the two notified a stage manager, who hurried to rectify the wrong as quickly as possible, though it played out over two painfully awkward minutes in front of almost 33 million people watching on ABC and countless others on social media.