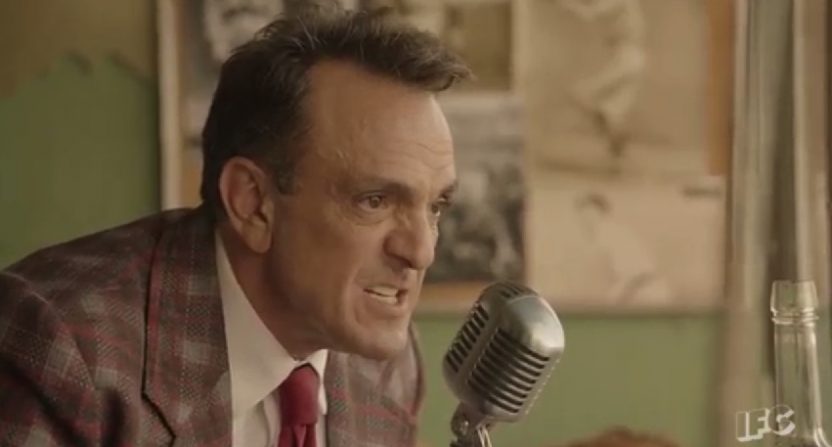 Sports TV shows haven’t really had a great run historically, which is maybe why Brockmire getting renewed for a fourth season caught so many people offguard. Some get cancelled because of outside pressure (Playmakers), while many others get canned because of low ratings (Pitch).

This week, we asked our staff what their favorite sports TV show was. Here are our answers.

Andrew Bucholtz: For me, I think it’s actually Brockmire. Yes, it’s only aired one season so far, but that season was so good, so funny, and so apt in its portrayal of sports media in general and some of the challenges of calling minor-league games for a tiny audience in particular. Hank Azaria not only has developed a perfect baseball broadcasting voice here, he’s built a fascinating character around that voice, and creator Joel Church-Cooper did a tremendous job of bringing plot to the show and making it not just the same story every week.

The interactions between Azaria’s Brockmire and Amanda Peet’s Jules James were particularly notable, and their relationship not only felt real, but produced a lot of great comedy along the way. And the cameos from everyone from Joe Buck to Jonah Keri were perfect. We’ll see how the show does in season two (and the already-announced seasons three and four), but for now, it’s the fictional sports show on TV that’s brought me the most joy.

Ian Casselberry: This is going way back, but HBO’s 1st and Ten sticks with me since I watched it as a kid. (Thanks, Mom and Dad, for being cool with me watching stuff with swearing and nudity back then!) I believe 1st and Ten was one of HBO’s first moves into original programming. It was a half-hour comedy following the fictional California Bulls pro football team and one of the big hooks was that the team was owned by a woman (played by Delta Burke).

Long before ESPN’s Playmakers, this was a show that tried to tell the behind-the-scenes workings of a football team, albeit from a comedic, often goofy standpoint. (I think most of the story took place during training camp, so there could be the drama of position battles and so forth. Maybe it was the inspiration for Hard Knocks!) Game footage was taken from the USFL.

However, 1st and Ten has the unfortunate legacy of O.J. Simpson being one of the stars (I think in Season 2), but having a real former player in the cast gave the show some credibility — even to a young viewer who wasn’t quite a devoted sports fan yet. I have no idea if the show holds up. It’s been so many years and I’m guessing I’d watch it now and say “That would never happen.”

Matt Clapp: Playmakers. First of all, it was a pretty big deal in that it was the first drama series ever on ESPN. This paved the way for more such programming and the 30 for 30 films. ESPN was no longer just a channel for highlights, game broadcasts, and sports analysis.

But it was pretty damn good too, and while it felt a bit over-the-top at the time… it’s proven to be pretty accurate with the NFL’s off-the-field issues.

The show was created by Aaron Sorkin, who would later produce The West Wing. It had great writing (and more dialogue than other half-hour shows), great acting, and great storylines, but horrible support by ABC, which had no idea what to do with it.

I loved the back and forth amongst the staff, and Sorkin perfectly captured the camaraderie in a newsroom. There was always the struggle to get a show on the air, whether it was financial or otherwise.

Sports Night was a show that lasted only two seasons, but should have lasted four or five. Much of the cast went on to bigger and better things like Six Feet Under and Parenthood (Krause), Desperate Housewives (Huffman), and The Good Wife (Charles).

Sports Night remains one of my all-time favorite shows.

Ben Koo: So usually I read some of the other responses and then I get angry with everyone’s terrible opinion before offering my totally correct opinion while mocking all of the others.

But I actually considered picking Ken’s answer (Sports Night, which oddly aired on a random channel with the odd episodes being played and then weeks later the even episodes…..this made it very hard to watch and I only figured this out maybe after a handful of episodes). I also was close to picking Matt’s answer. How about that Coach theme song, right? I miss that show. Haven’t seen an episode in maybe 15 years.

But Andrew has this one nailed. Any show that gets Joe Buck to say “I was born in Florida. Of course I’ve had a finger in my ass.” is better than any of these options and frankly better than almost anything on TV ever.”

Joe Lucia: I am a massive Sports Night fan, and I’m still aggravated all these months later that it was pulled off of Hulu.

It was hilarious, and arguably one of the most quotable shows of the late 90s (I still spout off “hip deep in pie” and “I know there’s a lot of jargon…” quotes on occasion when the situation calls for it). In hindsight, some of the “sports” aspects of the show make minimal amounts of sense, (CSC was only going to provide extra draft coverage in case of a tennis rainout?), but that doesn’t damper my enjoyment of the show. Hell, if anything, it enhances my enjoyment because it makes me realize just how poorly the network was run.

Sports Night was so great that my AA colleague Jay Rigdon came up with a modern day plotline that sounded feasible enough.

Alex Putterman: This question has made me realize that I don’t have much patience for sports shows. I’ve tried most of the popular and acclaimed series (Friday Night Lights, Eastbound and Down, The League, Brockmire) and found myself kind of underwhelmed or disappointed with all of them (I’m sorry, I’m sorry). Maybe I hold sports shows to too high a standard. I’m not sure.

Given how hard it’s been to find a sports show I like, it’s unfortunate that one sports show I did truly enjoy (at least for the brief time it was on), got canceled after one season. Pitch wasn’t perfect — it got a little soapy, had some odd storylines and botched some baseball-related details — but it had a whole lot going for it. It began with a compelling premise, centered around the hypothetical first woman in Major League Baseball, and built some fascinating, multi-dimensional characters who brought the fictional San Diego Padres clubhouse to life. The plotlines were often bold and intriguing, without seeming forced (at least most of the time). And the show’s relationship with MLB and Fox, which allowed it to use real-life team names, logos, broadcasters and even All-Star game highlights, gave the whole production an important air of verisimilitude.

Maybe I would have eventually soured on Pitch the way I have on other sports shows, but I sure wish I’d gotten the opportunity to find out.

Jay Rigdon: Sports Night has been well covered, so to go slightly outside the box, I’ll point out that WWE Monday Night Raw has been on the air for 25 years now. In terms of regular primetime programming, that puts it up there with The Simpsons and Saturday Night Live from a longevity standpoint, and an argument could be made that Raw has held up better than both of those shows over time. (Though it certainly made its biggest cultural impact in the late 90s.)

It’s a weekly scripted program featuring legitimate athletes, and it’s hard to classify it as anything other than a fictional sports show. (WWE themselves pivoted to “sports entertainment”, after all.) It amounts to a soap opera, and the writing occasionally fails to reach even that level of quality. But there are genuinely talented performers on TV each week, with both the ability to be believably dangerous physically while also being asked to carry dramatic or comedic storylines. It’s not likely that any of the current crop of WWE talent is going to follow The Rock’s career path, but you never know.

Matt Yoder: Is it too much of an old school answer to say Coach? Craig T. Nelson and Jerry Van Dyke were a big part of my childhood growing up. And who didn’t love that fight song? Looking back, it’s somewhat remarkable the show had a nine season run on ABC. It’s a sentimental answer but I can’t think of a scripted sports show that matches it for me personnally.