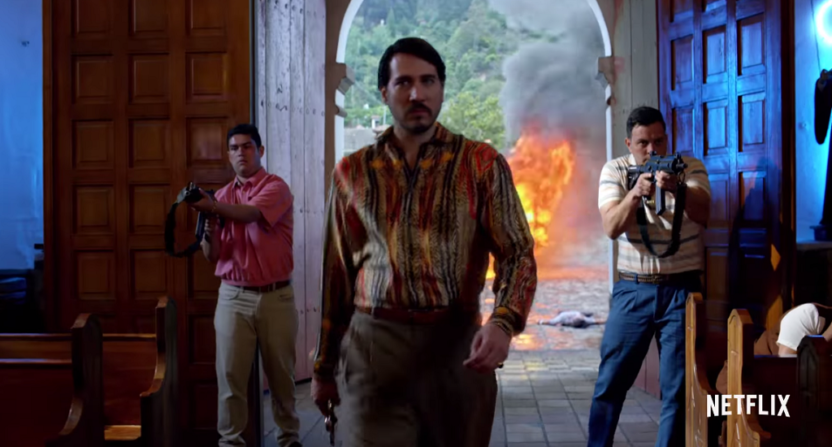 The drama surrounding Netflix’s Narcos series might not rival the story playing out on screen, but it’s getting closer.

On September 11, Narcos location scout Carlos Munoz Portal was shot and killed in a rural area close to Mexico City while looking for locations to film the fourth season. Shortly thereafter, Roberto De Jesus Escobar Gaviria, the brother of Pablo Escobar, starting speaking about the network’s security practices as well as his demand that Netflix pays his Escobar Inc. a billion dollars for using his brother’s name and story without his permission.

Once known as the “chief of the hitmen” for the Medellin cartel, the 71-year-old also had some disturbing ideas for what Netflix should do to protect its cast and crew.

You have to eliminate all threats…if you have the intellect, you don’t need to use weapons. If not, you have to. In this case, Netflix should provide hitmen to their people as security.

Reading between the lines, Escobar seems to be implying that Netflix should hire his people as “security” for the production.

“It is very dangerous. Especially without our blessing. This is my country.”

Olof Gustafsson, the CEO of Escobar Inc., was asked directly if he had any knowledge about what happened to the slain location scout, responding, “No comment on that. But Escobar Inc. cooperates with all law enforcement.”

As for the billion dollars, both Gavaria and Gustafsson seem to think they’ll see some form of payment from Netflix eventually. That or they’ll do something about it if they don’t.

“Netflix are scared,” Gaviria told the Hollywood Reporter. “They sent us a long letter to threaten us. Right now, we are in discussions with them through our attorneys Browne George Ross LLP to obtain our $1 billion payment. If we don’t receive it, we will close their little show.

“At first, they refused to acknowledge us, added Gustafsson. “After we registered all the trademarks and we’ve been granted some of them, they sent us a cease-and-desist letter. After that our attorneys and their attorneys have come to an agreement that basically they need to pay us something. Now it’s a matter of determining how much that something is…at the end of the day, if we don’t take a deal, then we own the trademarks. They would have to rebrand their entire show. They know this. This is why they’re talking to us. Otherwise, they would never entertain any discussions with a drug cartel family. ”

Roberto Escobar, Pablo’s brother, has previously requested that Netflix show him the second season of the series before it went to air in order to confirm authenticity. Presumably, they did not, and the bad blood only festered from there.

Netflix has found success with Narcos, even beyond the Pablo Escobar storyline, but it sounds like the future of the show might be best taken far away from Columbia and Mexico in the future. Just in case.