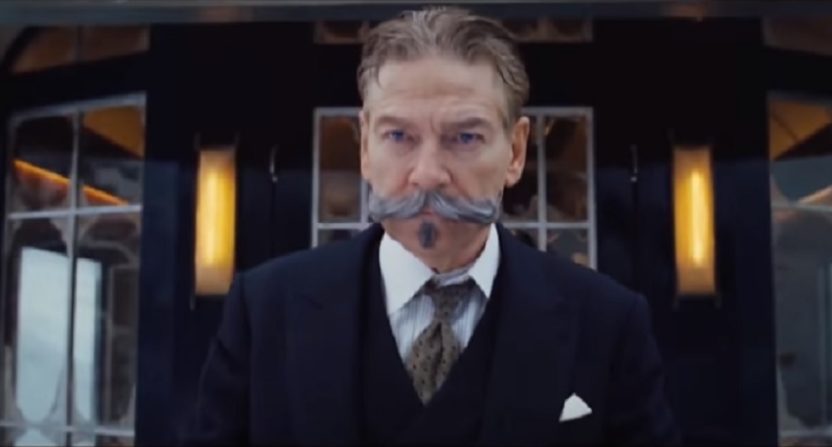 The week in trailers included at least one of the more anticipated movies of the year in Murder on the Orient Express, along with a first look at a film sure to popular among film and sports fans, thanks to Channing Tatum, Adam Driver and NASCAR. Also, we have some potential prestige TV from HBO and some stuff that might appeal to younger audiences. (Very young, in one case.)

An Ocean’s Eleven-style heist taking place at a NASCAR race? Well, probably not. Logan Lucky is directed by Steven Soderbergh (making his return to filmmaking) and the story revolves around an attempted robbery of the Coca-Cola 600. But the Logan brothers (Channing Tatum and Adam Driver) aren’t as smooth or savvy as Daniel Ocean’s crew. They do have explosives expert Joe Bang (Daniel Craig), however, who’s there to explain to the brothers how important the difference is between one and two yards.

Some might snicker at including this one, but if you have kids, there’s a strong chance you’ll be seeing Paddington 2. The first Paddington, based on the popular children’s books about a talking bear with a love for marmalade, was a pleasant surprise to those who saw it. Hitting theaters three years ago, it was funnier and sweeter than adults may have expected, and with plenty of hijinks and fun visuals for kids to enjoy.

This is a short teaser, but London looks spectacular, the cast is loaded (including Hugh Grant, Brendan Gleeson and Sally Hawkins), and you know that soapy bucket of water is ending up on someone’s head.

If you have to be stranded in the Utah mountains with no food, little shelter and little hope of being found, being in such a situation with either Idris Elba or Kate Winslet might make the situation a bit more survivable. Neither of their characters appear to be ready for outdoor survival, however. (And how many people really would be, though there would probably be some enthusiastic outdoorsmen who might embrace the situation.) Elba plays a surgeon who needs to get back to the east coast for a procedure, and Winslet is a photojournalist who needs to get to her wedding. Flight delays force both to seek a charter plane, a decision that goes terribly wrong. Could this be an Academy Awards contender?

Murder on the Orient Express – Nov. 10

Kenneth Branagh’s remake of the 1974 film based on the 1934 Agatha Christie detective novel is arguably one of the more anticipated movies of the year. Or maybe we know about it mostly because of Josh Gad trying to coax co-star Daisy Ridley into spilling secrets on Star Wars: The Last Jedi in a series of videos.

But this first trailer for Murder on the Orient Express does a fine job of establishing the premise to those who might not be familiar with the original story, providing a quick summation of each character involved in the murder mystery and the actors playing those roles. (The cast includes Johnny Depp, Willem Dafoe, Penelope Cruz, Michelle Pfeiffer and Judi Dench.) Then there’s Branagh himself as Hercule Poirot, who proclaims himself “probably the greatest detective in the world.” Love that “probably” qualifier. And that magnificent mustache.

The trailer has been ridiculed for the inclusion of Imagine Dragons’ “Believers” playing at the end, a blatant attempt to add something contemporary to what looks like a classic setting and story. That’s compelled some to put their own ideas for music at the end of the trailer to hilarious effect.

The first season of AMC’s Preacher left fans of the source graphic novel by Garth Ennis and Steve Dillon somewhat dissatisfied. As faithful as the portrayals of Jesse Custer, Tulip and Cassidy were, very little of the comic book storylines that were familiar to fans was adapted to the screen. Where was the outrageousness, demented fun, and ink-black humor?

Season 2 of Preacher may change that, however. Producers Evan Goldberg and Seth Rogen acknowledge that Season 1 was kind of a prequel intended to introduce the characters and build to the outlandish stories and characters fan fell in love with. This new trailer, with the Saint of Killers, Herr Starr, and Jesse expressing his intentions to find God and make him answer for what he’s done to the world, seem much truer to the original comic books. Here’s hoping the second season is even better.

At 30 seconds, this teaser is way too short, but provides just enough to tantalize. First, you have the powerhouse names of David Simon and George Pelecanos, both best known for their work on The Wire, credited in neon graphics that fit right in with the glitzy, sleazy Times Square locale of the 1970s. Then we get some quick glimpses of an impressive cast, including James Franco and Maggie Gyllenhaal, along with actors that have done excellent work on other HBO series such as Lawrence Gillard Jr. (The Wire), Don Harvey (The Night Of) and Emily Meade (The Leftovers). Franco, by the way, is playing twin brothers. Take that, Ewan McGregor.

OK, we didn’t get to this one last week because of the Memorial Day holiday. But it’s worth including, especially if you haven’t seen it. Based on the video game series that began in the 1980s (which the beginning of this trailer depicts so well with the Nintendo console, 8-bit graphics, and small TV), this animated series — with a Japanese anime style that’s entirely appropriate for the game’s origins — follows the last surviving member of a disgraced clan fighting to save Eastern Europe from Dracula.

Acclaimed comic book writer and novelist Warren Ellis (The Authority, Transmetropolitan, among so many others) wrote the series, and Adi Shankar (Dredd) is a producer, giving Castlevania even more geek cred. This could be your favorite summer entertainment.