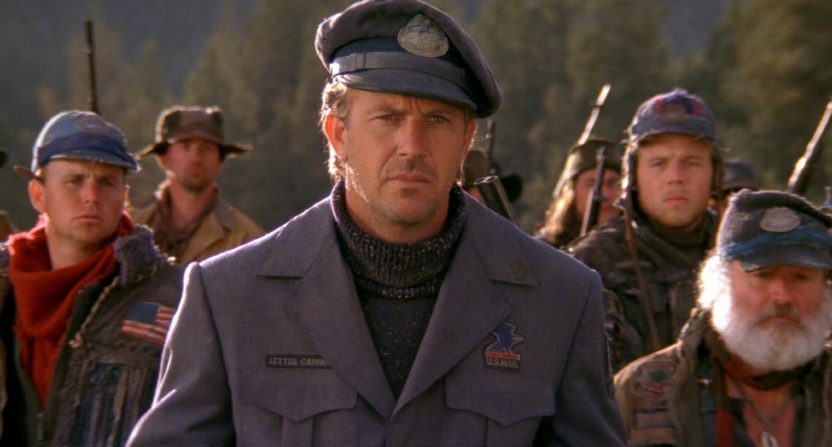 In October 2017, the town of Santa Rosa was just one of many in Northern California ravaged by the Tubbs Fire. The disaster burned 36,807 acres and incinerated over 5,o00 structures. Santa Rosa got it worst of all, suffering an estimated $1.2 billion in damage, losing 2,800 structures and scores of homes in the process. One neighborhood particularly devastated was Coffey Park, where suburban streets once lined with homes were left with piles of rubble where families once lived. It was a scene right out of a post-apocalyptic movie.

On October 12, a drone video captured a lone USPS mail truck casually making its way down one of Coffee Park’s streets, delivering mail to mailboxes with no homes behind them and no residents to live there. The imagery was tragic and sobering, but there was also something naively hopeful about it as well.

That famous creed, “neither snow nor rain nor heat nor gloom of night stays these couriers from the swift completion of their appointed rounds,” echoed through the minds of Americans as they watched this postman make his rounds, delivering a little piece of humanity to a place that seemed to have lost that.

When author David Brin penned his post-apocalyptic, science fiction novel The Postman in 1985, this was the essence of what he was trying to say. It’s the story of a man in a dystopian future who takes a postman’s uniform to stay warm and pretends to be an mail carrier to curry favor and food, only to inadvertently kickstart the Restored United States movement of which he becomes a leader. Here’s how Brin described the story and the character at the center of it.

“It’s a story about how much we take for granted — and how desperately we would miss the little, gracious things that connect us today. It is a story about the last idealist in a fallen America. A man who cannot let go of a dream we all once shared. Who sparks restored faith that we can recover, and perhaps even become better than we were.”

For Brin, the story is about how humanity will ultimately come together in a time of great need, instead of falling apart the way it’s often depicted in post-apocalyptic scenarios. That kind of mindset didn’t exactly jibe with Hollywood’s vision of the future, which often resembles something more akin to Mad Max or The Walking Dead.

Still, the book was a hit and Hollywood came calling. Brin wrote on his site that around the same time he was shopping the book to studios, he and his wife attended a screening of Field of Dreams. Taken by the hopeful messages and soulful center of the film, they both thought star Kevin Costner would be a great pick to play the role of the lead character in the film adaptation. Over the years, a script was written and reworked and rewritten, eventually failing to resemble Brin’s original vision and take on a post-apocalyptic viewpoint more in line with what Hollywood was used to.

Then, eventually, Kevin Costner did come aboard. Not only that, Costner threw out the most recent draft and worked with writer Brian Helgeland (who later won an Academy Award for writing the screenplay to L.A. Confidential) to bring back the hopeful message from the book. They threw out some of the more outlandish sci-fi aspects of the story (sentient AI and generic engineering) and grounded it in the reality of a fallen United States and how people might live without all of the basic essentials we’ve come to rely on.

Not only would Costner star, but he would also direct. The last time he’d pulled double duty was with Dances With Wolves and he walked away with seven Academy Awards, including Best Picture and Best Director. While that film was set in the past and this would be set in the future, their general aesthetic of an untamed countryside would be similar, as would many of the moral and story beats driving the narrative.

By this time, however, Costner had also developed a bit of a reputation for creating overwrought epics heavy on runtime that failed to deliver on the promise of his first feature. 1994’s Wyatt Earp, which he starred in and produced, was seen as the lesser of two films at the time on the subject (compared to Tombstone). In 1995, he starred, produced, and took over directing duties on Waterworld, which is remembered as a critical and commercial failure, though it did eventually make back its budget over time. The Postman, it was thought, would be Costner’s way of recapturing what worked in Dances With Wolves.

As you’re probably well aware, that’s not what happened. Clocking in at 177 minutes, the $80 million film was a critical fiasco and even bigger financial disaster when it opened on December 25, 1997. After opening to just $5.3 million on 2,207 screens, the film’s total domestic box office delivered just $17.1 million. From the jump, The Postman joined a small pantheon films such as Ishtar and Heaven’s Gate as shorthand for box office bomb.

Is The Postman as bad as everyone says it is? It depends on what definition you’re going by. It’s not “so bad it’s good” in a way that an well-intentioned film production ends up being profoundly goofy and lovable for its faults. It’s not bad in the sense that it’s poorly made either, as it has an admirable scope and design that defers on CGI to present a well-worn, authentic idea of what “the world of 2013” might someday look like. Does that make it a bad move that’s secretly good? While the movie does have a small army of supporters who would say so, that’s still a tough claim to make. Perhaps the right way to say it is that The Postman isn’t good, but it also isn’t as bad as you’ve heard.

Costner’s reputation for making bloated films is fully realized here. Because, perhaps, they thought they were making an epic story on par with Dances With Wolves or other great American sagas, the editors put away their scissors and let the story breath way beyond what it needed. It takes an incredibly long time to get from the beginning of the film to the point where Costner’s character embraces his destiny, which would be fine if that’s where the movie ends. But it then continues for another hour after that. Long stretches of characters’ interactions could have been decreased or excised altogether without losing much.

We’re also talking about an earnest story from an earnest author adapted into an earnest movie made by a filmmaker who wants himself to be seen as being very earnest. While there’s room for that kind of movie in this world, it takes a certain eye to guide it and not get laughed out of the room. Either because of his Hollywood status or the lost sight of what was important to the story, that’s not what we get here. Instead, we get a movie that’s supposed to be about noble sacrifice that ends with people admiring a statue of the man who starred and directed in it. We get a movie that offers up serious lines such as “I want all mail carriers hunted down” and expects us not to guffaw.

Like the Santa Rosa mailman delivering mail to the fire-stricken neighborhood, maybe it just works better as a story than it does as a sweeping epic about ideals.

We also get a movie that posits a world where America’s honor and glory is restored because of a system of information delivery that was already becoming obsolete by the time it was being made. This movie is selling “America” and the notion that all good people would want to see it return as it was if it went away. That gets into a whole philosophical argument that we’ve been having as a nation for centuries and certainly has only gotten louder in recent years. Not that this was the reason the movie bombed, per se, but it’s certainly viable to think audiences looked at this and thought to themselves, “Eh, let’s just start fresh instead.”

What’s interesting, though, is that it’s possible The Postman would have worked better had it been released in the post-9/11 world.  It’s post-apocalyptic vision of America didn’t quite fit with the America of 1997. It’s got a pretty strong anti-military stance at a time when we were feeling good about the Gulf War. Had the movie come out in 2007 instead, it would have been greeted by audiences more dubious about the good/bad constructs of our nation and its place in the world. Perhaps it would have made a difference in the way it was viewed, but perhaps not.

There probably won’t be any kind of great reckoning for The Postman. No time when scholars gather to sing its praises and force society to reconsider its merits. It’s a long, often-boring slog of a movie that doesn’t know if it wants to be a drama, action film, or awards bait. It certainly came through on that last one, winning all five Razzies that it was nominated for, including Worst Picture and Worst Director.

It would take seven years, but Costner would direct once more. This time, he scaled back and delivered a solid Western in Open Range. As a director, he seemed to have learned from his past mistakes and realized you don’t need three hours and epic scope to tell a good story. Hopefully if he ever makes another movie, Costner will keep that in mind.