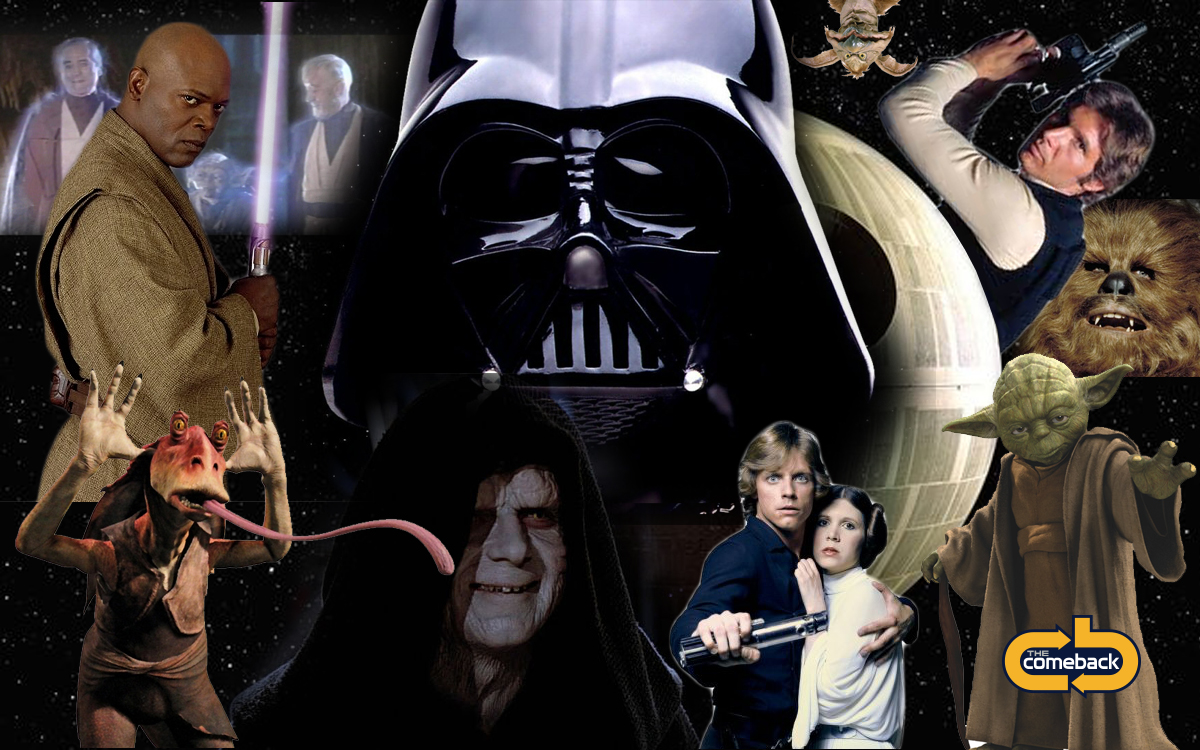 The Force is back. The banal yet enthralling epic that is Star Wars makes its triumphant return to the big screen this weekend. Even better: this reboot wasn’t penned by George Lucas. But before we move forward and into a world where the jacked guy from Girls plays a dark lord, it’s important to look back at how we got here. Who’s most responsible for the all the good and bad that’s led us to this point? There’s only way to figure that out.

One note: These are solely based on Episodes I-VI. Anything that occurred or is known from elsewhere was not factored in. Also, no spoilers!

1. Emperor Palpatine: The easiest call on the list, and not just because of that sweet blue lightning that shoots out of his hands. First, he mind fu**ed the galaxy into handing him Supreme Leader powers, more than enough to warrant being at the top of these rankings. But what truly pushes Darth Sidious to No. 1 is the way he absolutely undressed Yoda in Episode III. If not for Luke and Vader teaming up in Return of the Jedi, the galaxy would likely still be under Palpatine’s control. Dude’s a brilliant and ruthless villain. Who cares if his face looks like a 92-year-old’s testicle?

2. Mace Windu: The only Jedi to defeat Palpatine in a 1-on-1. If Anakin weren’t such a wimp, Windu would have destroyed the Emperor and saved the galaxy before Luke or Leia were even born.

3. Luke Skywalker: Brought balance to the galaxy, led the rebellion’s victory over the Empire, found the good in Vader. Would have been No. 2 here had he taken down Palpatine by himself. Instead he needed a cheap assist from his old man.

4. Darth Vader/Anakin Skywalker: “If you’re not with me you’re against me,” he whines to Obi Wan in Episode III. The petulance in that scene pretty much sums up the character Hayden Christensen turned Anakin into. Lucas would have been better off casting a branch-less tree. Working in Anakin’s favor, though, is his impressive win-loss record in Jedi duels as well as the terrifying badass Vader becomes.

5. R2D2: A robot, sure, but his VORR – Value Over Replacement Robot — is Trout-esque. Involved in nearly every Jedi/Rebellion victory in the series.

6. Obi Wan Kenobi: The white receiver of the Jedis. Obi Wan might not have as much raw talent as some of his comrades, but through grit, guile and some good ol’ fashioned elbow grease he’s able to knock off both Anakin and Darth Maul and rise to the top of his class. He’s like the Wes Welker of Star Wars. Pre-concussions.

7. Yoda: Fear leads to anger which leads to hate which leads to blah blah blah. You know what else leads to the Dark Side? Getting played by the Emperor. Think of Yoda as the Joe Namath of Jedis — lots of talk, few results, one lucky big win that he had little do with. Don’t forget: this bum was also against training Luke and would have been perfectly content spending his final days making stew in his nasty hut while the galaxy remained in Palpatine’s hands.

8. Han Solo: His performance in that asteroid field might be the most impressive feat of the saga — but what’s the deal with the vest?

9. Chewbacca: You know how Chewy makes an appearance in Episode III and we learn that he and Yoda are boys? Well isn’t that relationship, along with his past life as a big time Wookie general, something we should hear about in Episode’s IV-VI? Reason No. 2,123 we should all be thankful Lucas is no longer in control.

10. Darth Maul: If there’s anything we’ve learned over the past few years it’s that killing Liam Neeson is an incredibly difficult task. It would have been nice, though, it at some point we’re told why this sith wears war paint and has a bunch of horns sticking out of his head.

11. Count Dooku: Where’d the “count” title come from? And you think he knew Palpatine’s plan was to have Anakin off him?

12. Qui-Gon Jinn: On the one hand, he was the one responsible for bringing the Skywalkers into Jedi world. On the other hand, we sure that’s a good thing?

13. Princess Leia: Would be higher up if not for that ridiculous faux-British accent she uses in A New Hope. Also, for someone leading a rebellion she seems to get captured an awful lot.

14. Jabba the Hutt: So brilliant that the Jedi can’t pull off mind control on him, yet not smart enough to realize that Lando has been spying on him for months. (Ed note: how Jabba’s sidekick Salacious Crumb isn’t on this or every list makes me want to scream. UNA!)

15. Lando Calrissian: From imperial puppet to Gold Leader. Not bad for a hustler.

16. C-3PO: Makes Anakin seem like a delightfully cheerful and optimistic human being.

17. Greedo: Not only is this green thing apparently immortal, but he clearly has regeneration powers too.

Maybe Greedo is a Jedi, too!

33. Admiral Ackbar: It’s a trap! Yeah, you don’t say. Nothing gets by General Lobsterface.

41. Queen Amidala: First she enabled every one of Anakin’s bad traints. Then she becomas the source of Anakin’s fear, which, as we all know, leads to hate and yada yada yada. Then, after everything had gone to hell she literally died of a broken heart. Way to stay true to the cause, lady.

54. Hyperdrive: Like a good parking spot, never available when you actually need it.

83. The Death Star Architect: Considering the core reactor was, you know, the core of the whole thing, it seems like a better job could have been done constructing some sort of shield around it. And they left susceptible in Death Star 2.0, too!

105. Rancor: A giant dungeon-dwelling monster that eats those who dare disappoint Jabba, all while the Hutt’s court watches in delight? It would be higher if it wasn’t felled by Luke’s simple bob and weave tricks…and its own door.

217. Dak Ralter: “Right now, I feel like I could take on the whole empire myself,” he says to Luke towards the beginning of The Empire Strikes Back. So, about that…

9,323: Whoever wrote the Battle of Hoth: This is the fight that takes places on the snowy planet in The Empire Strikes Back. The Star Wars saga is full of plot holes* — most of which are the result of Lucas and Co. being too lazy to re-watch the original three films before writing Episodes I-III —but this is just embarrassing.

(*Some egregious examples: Obi Wan not recognizing R2D2 and C-3PO; Obi Wan not knowing that Anakin had a daughter even though he was there for her birth; Vader not being able to find his son even though he’s living on his home planet with his brother-in-law and using the same last name; Luke becoming a Jedi master after just a couple hours of training.)

There are many more characters we didn’t rank, from the never-ending army of horribly-shooting stormtroopers, to the same horribly-shooting droids and clones, to Watto, the slave owner who lost young Anakin in a bet, to Shmi (how could we forget Shmi) to that fish-face guy who flies with Lando, Nien Nunb to…okay this could be a very long list.