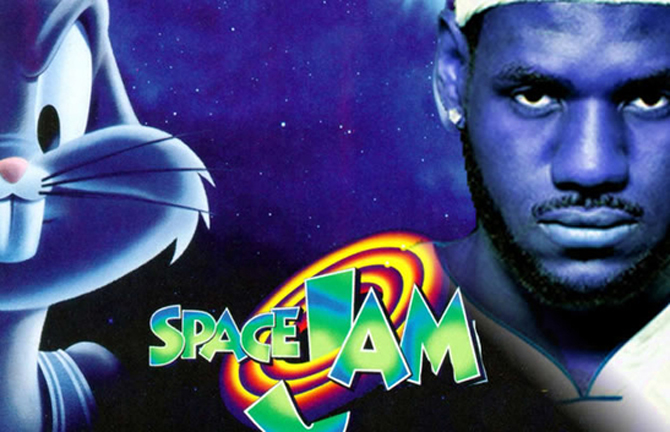 Few sequels ever live up to the hype of the original when it comes to movies, but every now and then you get a good sequel. The Empire Strikes Back? Great. Caddyshack 2? Forgettable. If movies are not getting sequels, they are getting reboots these days, which is one way to bring back favorites from many of our younger days.

Star Wars came back in a big way, and later this summer we will get a look at a brand new Ghostbusters. There may be no plans to bring back Back to the Future or Ferris Bueller’s Day Off, but we now know for sure we are getting a brand new Space Jam, and there’s really only one way to respond to this blockbuster news.

As has been rumored to some degree or another for who knows how many years now, LeBron James will take the lead role in the resurrected Space Jam franchise, which will reportedly be a follow-up to the original from 1996, starring Michael Jordan. A script is being written by Justin Lin of Fast & Furious 6 fame, Andrew Dodge and Alfredo Botello, according to The Hollywood Reporter.

It makes too much sense for a new Space Jam not to use LeBron as the lead star of the movie. Putting aside his acting chops as seen in Trainwreck, James has the perfect personality to pull this role off. Like Jordan before him, LeBron is the face of the NBA, no matter what Steph Curry seems to do. When James and his company signed a deal last summer with Warner Bros., it was just a matter of time before Space Jam 2 stopped being just a fantasy and started to become a reality.

Now we can start to ask some real questions about Space Jam 2, like when to expect it to hit theaters.

Some other questions worth asking may also include:

'Space Jam 2' will be 88 minutes of Bugs Bunny negotiating bonuses & endorsement deals only to leave the Tune Squad to play for the Celtics.

I don’t know, but I do look forward to seeing how this turns out. It will undoubtedly be a fun family movie, but beating the original when it comes to its campiness is hard to do.