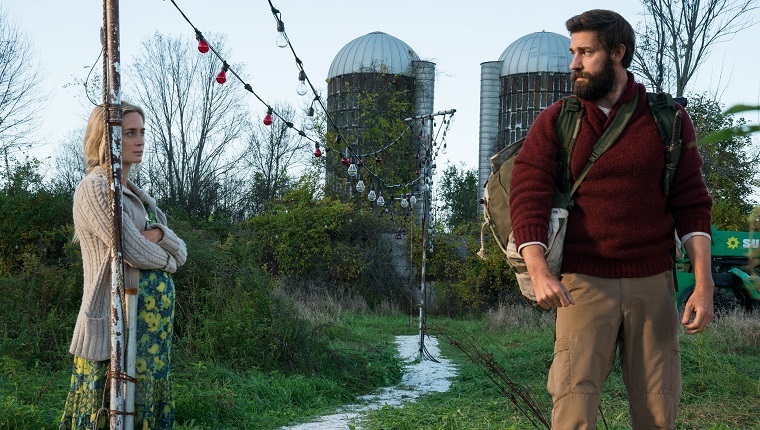 Fueled by a clever marketing campaign with trailers that shared just enough to intrigue moviegoers, while selling the familiar faces of Emily Blunt and John Krasinski, A Quiet Place was a box office sensation this past weekend. The horror/sci-fi movie grossed $50 million at the box office, more than twice what parental sex comedy Blockers earned, while pushing Ready Player One to a distant second.

(Depending on where you live, the movie may have been a tough ticket as well. A Quiet Place is showing in three theaters in my area, and showings were regularly sold out on Friday, Saturday and Sunday — in addition to Thursday night screenings. Advance seating is a wonderful thing. Or not, if you went to the theater hoping to catch the weekend’s buzzy movie.)

Now imagine if A Quiet Place had been a Cloverfield film. Would that have affected your anticipation or interest in the movie? Does the thought of a what felt like a fresh movie directed by Jim from The Office (his third film, by the way) having that Cloverfield brand slapped on it and associated with three previous films — at least one of which wasn’t very good — depress you just a little bit?

According to a Slashfilm interview with writers Bryan Woods and Scott Beck (Krasinski later worked on the screenplay as well), they had considered pitching the script to Paramount as a Cloverfield film (10 Cloverfield Lane was out at the time). But the studio executive Woods and Beck met with saw the movie more as a standalone project rather than something that could cross into the Cloverfield series.

Whomever that Paramount executive is deserves a handshake, because he was right. While the post-apocalyptic storyline and alien invasion arguably meshes with the Cloverfield concept, the mysterious bat-like (?) creatures in the story are quite different from what we’d seen in the previous films. Wouldn’t we have seen these monsters who fixate on sound before? A decent bit of backstory would have needed to be wedged in, and one of the reasons why A Quiet Place works is that it doesn’t waste time on exposition. The audience gets all it needs.

Besides, those creatures that have wiped out an unknown portion of the planet (America? The entire Earth?) are less compelling than the struggle of the Abbott family to survive and attempt some sense of normalcy amidst the near-impossible circumstances of trying to live without making any sound loud enough to attract the notice of those monsters.

(Maybe there was a bit too much normalcy attempted, resulting in the questionable decision to get pregnant and bring a child into that world. But hey, if you were married to Emily Blunt or John Krasinski, how would you prefer to pass some quiet, intimate time?)

The focus on the five members of the family and the parents’ resolve to protect their children is at the heart of the movie, which is surely a big reason why A Quiet Place has resonated with audiences. (Being a horror film certainly helped, and maybe interest in Blunt and Krasinski — who are married in real life — doing a film together also drew appeal.) What little backstory we get on the Abbotts — at least one part of which is significant — is all we really need.

Does that sound at all like a Cloverfield movie? Thus far, the three films in the series (The Cloverfield Paradox was originally conceived as a separate movie) have focused more on premise and gimmick than character, really to a fault. A Quiet Place fits the family dynamic into extraordinary circumstances. Thankfully, the movie found its way to a filmmaker who understood that well.