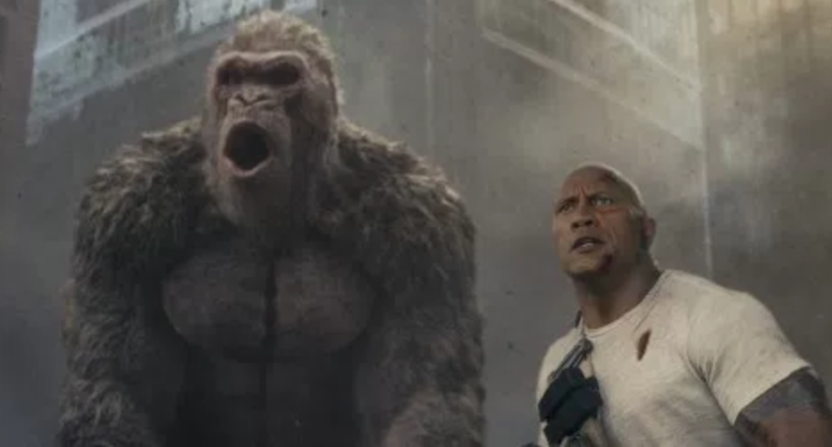 In the span of one month, Warner Brothers has successfully adapted not just one, but two video games into movies. Tomb Raider wasn’t a hit, but was an effective action movie with a female protagonist. (Also, it will likely make a profit.) Rampage will probably fare much better because of Dwayne Johnson.

(I’d say giant monsters were a formula for success too, but the disappointing Pacific Rim: Uprising kills that theory.)

It’s easy to say that Rampage works because it’s a Dwayne Johnson movie, and that’s largely true. But The Rock alone didn’t rescue a video game movie with his muscles and smile. Here is what Rampage did well, which should be enough to earn some blockbuster dollars before Avengers: Infinity War, Deadpool 2 and Solo: A Star Wars Story hit theaters.

Fans of the Rampage arcade video game might be disappointed to learn that the movie doesn’t follow the same story of the game very closely. (Although the original arcade cabinet of Rampage makes a brief appearance.) But there wasn’t much of a story to the game anyway. Players could be either be a giant gorilla, lizard or wolf and tried to destroy all of the buildings in a city before going to the next one.

There are indeed a gorilla, lizard and wolf in this movie, but only the ape gets to be Dwayne Johnson’s buddy and get his name from the video game, George. (There’s a throwaway line about the wolf’s name for those who need that reference.) But they’re not looking for fruit and chicken on their path through the city. And they don’t systematically destroy building after building.

Nor were any of the monsters human before they transformed into giant monsters. That would’ve been faithful to the video game. (Apparently, that was once under consideration, but director Brad Peyton shot that down hard. At least he can boast about that.)

Basically, those creatures are the delivery system for a Dwayne Johnson action movie, getting him from set piece to set piece. Think of a previous Peyton-Johnson collaboration, San Andreas, substitute giant monsters for an earthquake and you essentially have the same movie. At least this time around, Peyton doesn’t let the extraordinary phenomena overshadow his star.

Nothing else takes attention from Dwayne Johnson, either. That’s not entirely his fault. He’s become a big enough star and such a dominating presence on screen that he tends to attract attention from those who perform with him. Unless the co-star is a big presence himself, like Kevin Hart, Jason Statham or — since he’ll want to be mentioned — Vin Diesel, all eyes are on The Rock.

Unfortunately, that means actors like Naomie Harris (so good in films like Moonlight and Skyfall) and Jeffrey Dean Morgan (The Walking Dead) aren’t given much to do except trade some banter with Johnson and get thrown around in some action scenes. Both do so well enough, particularly Morgan with a Texas drawl so thick that you expect molasses to drip off his chin.

Also wasted is Joe Manganiello, though he disappointingly doesn’t share any scenes with Johnson in what’s really a wasted role. Warner Brothers has to figure out what to do with this guy. P.J. Byrne provides comic relief as a zoo scientist, but gets shoved to the side once the action really kicks in. I would’ve liked to see more of his character, but acknowledge that putting him aside was the right decision.

The real co-star of the film is George, who’s brought to life with some fantastic CGI and a motion-capture performance from Jason Liles. He gets the best line (or best gesture) of the movie. All of the digital effects are top-notch here with one exception. Do I really want to be the guy who says the giant CGI wolf didn’t look realistic? OK, I will be — while understanding how absurd that is.

Rampage is exactly what you think it will be

If you go in expecting anything else than a big, loud action movie built around Dwayne Johnson’s charisma (and t-shirt straining shoulders), you might be disappointed. This movie knows what it is and doesn’t try to be something else. Yeah, there’s some backstory to explain how somebody built like The Rock (named Davis Okoye) ends up as a primatologist at a zoo and why he likes animals more than people. But that’s just a little seasoning to give the dish some flavor.

But Warner Brothers has become good at turning video games into big action movies. (Let’s hope Rampage doesn’t become a franchise.) Maybe the studio should pretend their DC Comics properties are based on video games. Hey, there have been Superman video games. What about doing the DC Cinematic Universe through the Injustice or Arkham City series? OK, this comic book and superhero fan doesn’t want that, but I’m just throwing it out there.

By the way, Dwayne Johnson is supposed to play Shazam adversary Black Adam in his own DC Comics movie. The chances seem very strong that Brad Peyton will direct Johnson again in that one.