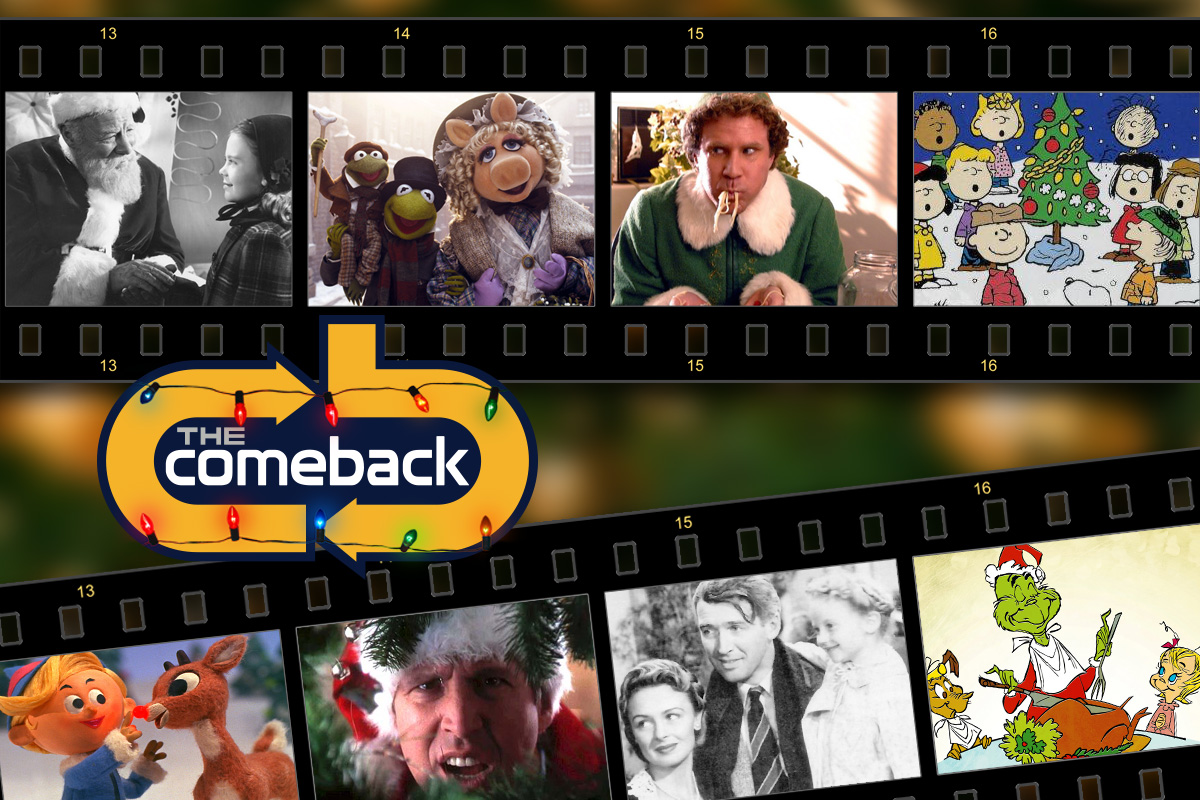 There’s the tree, the stockings, the presents, and the music, but what’s Christmas without the movies?

Holiday films seem to endear themselves to viewers in a way other genres can’t, perhaps because there’s only a short window of time each year in which they’re acceptably viewed, or because watching them usually means you’re surrounded by friends and family. Christmas movies have inspired some of the most lovable, recognizable characters in cinema (and some of the most hated – looking at you, Mr. Potter), perhaps because the characters’ experiences reflect the universally understood highs and lows of the season. From the golden-age classics and TV specials to newer members of the pantheon, here’s a list of 10 Christmas films that are required viewing each holiday season.

#10: How the Grinch Stole Christmas

As short and sweet as animated Christmas features come, How the Grinch Stole Christmas gives life to a Dr. Seuss poem and bestows upon us one of Christmas’ great tunes. It’s worth a watch every year for one of the most succinct reminders that the joy of Christmas transcends the trappings of commercialism.

As wonderful as “You’re a Mean One, Mr. Grinch” is, the music keeps improving as we move through the list of classic Christmas television specials. Really, what could be better than Burl Ives as the voice of a jolly, singing snowman? Maybe only one thing: An elf who secretly wants to be a dentist.

If there’s a charming side to Christmas commercialism, it’s found in the Macy’s employee played by Maureen O’Hara in Miracle on 34th Street. It’s an iconic New York film, and a reminder that it’s acceptable to hold sensible ideas in your head while remaining open to the idea that something magic – like Santa Claus actually existing – might be possible.

A Christmas Story captures the general trauma of childhood – soap in the mouth, teachers who don’t understand, parents who mean well but sometimes make you miserable, bullies with yellow eyes, getting dared into something stupid or painful – and it puts Christmas at the center of it all, which is a pretty good perspective through which to look at life as a kid. (It’s also the reason why, all year round, you say “fra-jee-lay” whenever you open a package. Or maybe that’s just me.)

The gorgeous Vince Guaraldi jazz soundtrack alone is enough for Charlie Brown to win the holiday made-for-TV game, but its story touches so beautifully on the key themes of Christmas that it easily earns a spot among the must-watch titles. First, its title character is a misfit trying to figure out what it all means. Who among us hasn’t shrugged and wondered what is the point of all this holiday craziness? This despair may not drive Charlie Brown to a Clark Griswold-style meltdown, but it does earn him the sincerest reminder of what the holiday season is really about, thanks to Linus and “lights, please.”

“White Christmas” is one of the great holiday tunes, and its eponymous film is filled with all the songs, laughs, and love you associate with a classic Christmas. Its lead actors are stunning: Of course, there’s Bing Crosby, but Rosemary Clooney turns in a phenomenal vocal performance and Danny Kaye reminds you how fun it is to sit back and simply be entertained by a song and dance. Sure, a whole plot point would be lost if Rosemary Clooney and Bing could just sit down and talk about their feelings, but once you find yourself humming along to “Sisters,” plot is the least of your worries.

Maybe with the exception of Christmas Vacation (a little further down), all the movies on this list are appropriately enjoyed by kids and adults alike. None, though, provides such a different experience for each respective party as A Muppet Christmas Carol. As a kid, I found it funny, and one of the first times I remember really feeling sad for a character came when Scrooge sits alone in his room on the night he’s first visited by a ghost. As you get older, you notice hilarious lines that slipped through before (“our assets are frozen!”) and realize you’ve spent your whole life imagining the Christmas Carol characters, in any context, as little puppet frogs and pigs. Yet, even if the characters take a different form than Dickens intended, the message of his story remains intact.

No other Christmas movie released in the 2000s could be considered among the “classics,” but Elf deserves its place in the pantheon. It’s worked its way into the holiday zeitgeist, and even with a Santa-centric storyline, it should be treasured year-round for its wonderful quotability (e.g., “I like to whisper, too,” and “You sit on a throne of lies”).

It clears away clouds of holiday skepticism by skewering some of our accepted cultural traditions, Christmas-based and beyond. How much more fun could life be if we decided to sing in the middle of the store, take a taste of the Passion Fruit Spray, or drench our noodles in maple syrup? Maybe that advice is best applied figuratively, but Elf is our best modern reminder to live like you’re always drinking the world’s best cup of coffee.

There’s so much expectation surrounding the holidays, and no one understands that better than the Griswolds. You figure Russ and Audrey have come to expect their father’s over-the-top behavior, and they suffer through the antics because they know he means well. Eventually, the holiday craziness reaches a boiling point, but until that happens, you trudge up to the roof to help your dad staple in some Christmas lights, and make your grandma think a shiny quarter is the best gift you’ve ever received. It’s hard to remember when you’re choking on overcooked turkey, but deep down, you know that having a family to spend Christmas with is the ultimate gift in and of itself.

Everyone knows a Clark Griswold. Everyone has a Cousin Eddie. Everyone has been Russ and Audrey. We laugh at Christmas Vacation because it rings so true.

Of course, the movie’s hilarious at face value, but when you realize that for every scene, there is a corresponding similar incident from your real life, you laugh even harder.

It’s a Wonderful Life is the ultimate Christmas film: A story of love and family and redemption all rolled into one. On the same night George Bailey experiences a low one might only feel during the holidays, his friends, family, and guardian angel band together to ensure he experiences the unique happiness that can only be found during the season, as well.

That core tale of redemption makes It’s a Wonderful Life the ultimate holiday must-see, but its classic Hollywood elements only add to the perfection. No other star could have brought the same down-home charm as Jimmy Stewart; pair him with Donna Reed and you have one of the sweetest love stories on screen. Plus, it’s rife with delightful golden-age character actors you recognize from dozens of other old movies.

It’s a Wonderful Life rewards anyone who views it annually. Every year, there’s another connection to be noticed between what happens to George as he moves through life, and what he sees when Clarence shows him the world as if he never existed. Every year, we go through some experience in our own life that brings us closer to understanding some element of George’s joy or pain. And every year, we grow more grateful for the friends, family, and guardian angels who carried us through it all.

While initial reports about the NFL’s punishment of Deshaun Watson were said to be for at least one...

While initial reports about the NFL’s punishment of Deshaun Watson were said to be for at least one...