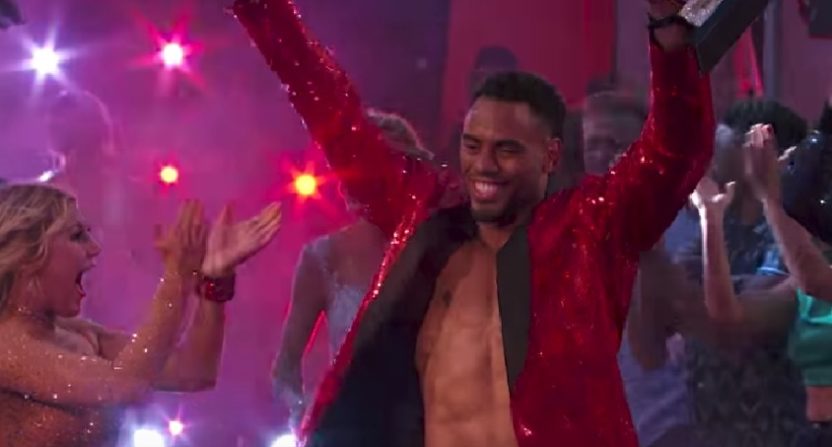 Rashad Jennings is currently without a NFL team, but the free agent has been keeping busy during the offseason as one of the contestants on Dancing with the Stars. Joining the competition turned out to be a worthwhile experience, as the running back won season 24 of the celebrity dance contest Tuesday night.

Jennings, soon to be 32, beat out former Chicago Cubs catcher David Ross and pop star Normani Kordei for the cheesy, but coveted mirrorball trophy. Ross was among the finalists after surprisingly beating out Olympic gymnast Simone Biles, almost certainly due to fan voting.

The winner was determined by a combination of judges’ scores and viewer votes based on last week’s and Monday night’s performances. The contestants also performed in Tuesday night’s finale, with final points tallied from the judges’ scores.

Each finalist gets to perform a freestyle routine for their last performance, incorporating whatever dance style and routine they prefer. It’s often the highlight of the season for the dancers who advance to the finals, and can be the difference between winning or losing the contest. Take a look at Jennings’ freestyle routine:

Along with professional dance partner Emma Slater, Jennings earned perfect combined scores of 40 from judges Carrie Ann Inaba, Len Goodman, Julianne Hough and Bruno Tonioli. That was likely to earn him the trophy, but fan voting could still push one of the other finalists over the top.

Ross and partner Lindsay Arnold finished third among the finalists in judges’ scores, but his popularity with viewers (surely fueled by voting from Cubs fans) pushed him past Kordei to be one of the final two contestants. However, Ross and Arnold did earn a perfect score for their freestyle routine, so they arguably earned their runner-up status.

Jennings becomes the fourth current or former NFL player to win Dancing with the Stars, joining Emmitt Smith, Hines Ward and Donald Driver. Others who advanced to the finals include Jerry Rice, Jason Taylor, Jacoby Jones, Von Miller and Antonio Brown. Michael Irvin, Kurt Warner, Lawrence Taylor and Chad Johnson are among the other NFL stars who have participated in the celebrity dance competition.

I would never have dreamed I’d be on @DancingABC much less win the Mirror Ball! @EmmaSlaterDance I'm SO your biggest fan! We did it!!! #DWTS pic.twitter.com/GCp24ar2Ud

Cut by the New York Giants in February to clear salary cap space, Jennings has yet to sign with a new NFL team. (He was due to make $2.5 million in 2017, had he stayed on the roster.) Last season, he appeared in 13 games (struggling with a hand injury) and rushed for 593 yards, averaging 3.3 yards per carry.

For his career, Jennings has rushed for 3,772 yards with 1,469 yards receiving. His best season was 2015, during which he rushed for 863 yards and compiled 1,159 total yards from scrimmage with four touchdowns. Jennings played two seasons with the Giants, also spending three seasons with the Jacksonville Jaguars and one with the Oakland Raiders.