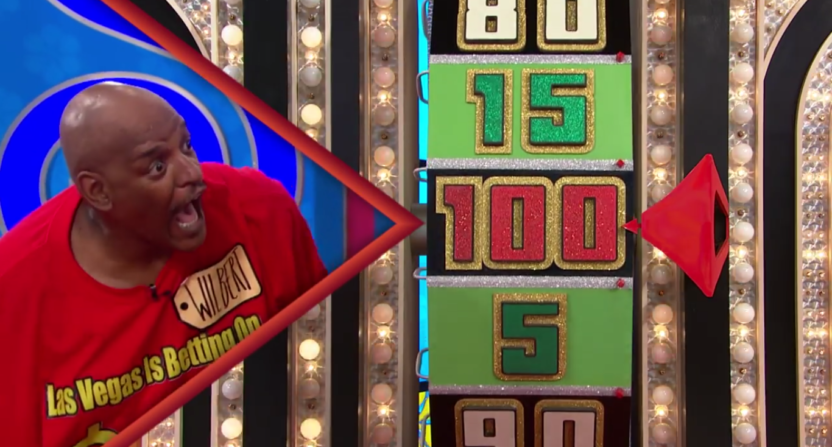 Okay, so as with any conspiracy theory, it’s important to note that I have no real idea if any of this is true. I can only assess the facts, as presented by The Price Is Right, and offer my personal analysis. It’s also important to remember that since the debacle when Twenty One was revealed to have been rigged there are pretty strict rules about ensuring fairness in televised game shows.

If The Price Is Right really did somehow manipulate results, there’d be a pretty severe penalty. So, here we go.

The Price Is Right posted this video to their Facebook page. In it, we start with Drew Carey announcing at the start of the show that if, during the Showcase round, a contestant spins the wheel and lands on $1, or totals $1 over two spins, they win a $10,000 bonus. And then we jump to the spins.

It’s a pretty great video, so take a look:

Okay, so a lot to unpack. First of all, FIVE times in a row contestants added up to a dollar. How often have you ever seen two contestants in one round get $1? It’s very rare because mathematically it’s very rare.

Here, now, I will do some math.

There are twenty numbers on the wheel, in increments of five. Obviously landing on $1 is a 1/20 probability. But getting there in two spins is basically also a 1/20 probability, as the second spin is the one that counts; you’re just starting with a different baseline than zero on the first spin. So, five straight instances of someone hitting a 1/20 shot? The odds of that come out to (checks math) 1 in 3,200,000.

That’s just for the five spins that ended up resulting in $1. Obviously it’s not quite straight up, considering there are a few variables involved. There are reset events with each spin that doesn’t land directly on $1, but if you muddy up the probability a bit and say they have a 2/20 chance (which isn’t accurate, since again, the two sums aren’t always known) it breaks down to 1/10 five times in a row, or 1 in 100,000.

I’m not a math expert, but my internal logician says it’s much closer to a 1/20 chance, five consecutive spins, just with a different baseline in between. So the five events that all end up totaling $1 are the five 1/20 events in a row, and that’s ridiculous. (The final two spins were solo spins, for what it’s worth, meaning three straight events reached $1; just on the barest minimum that’s a 1/8000 chance.

You could certainly argue that it’s not truly random once you start adding in second wheel spins; perhaps contestants can increase or decrease their spin pressure in an attempt to manipulate the system. That seems unlikely, though, because if there was really an element of skill involved, or at least skill that can be learned that quickly, more players through the years would end up with $1.

But, regardless of how you want to look at it, the math is simply much too good to be true, especially on some special day where Drew Carey announces a bonus for anyone who ends up on $1, leading to this video going as viral as possible.