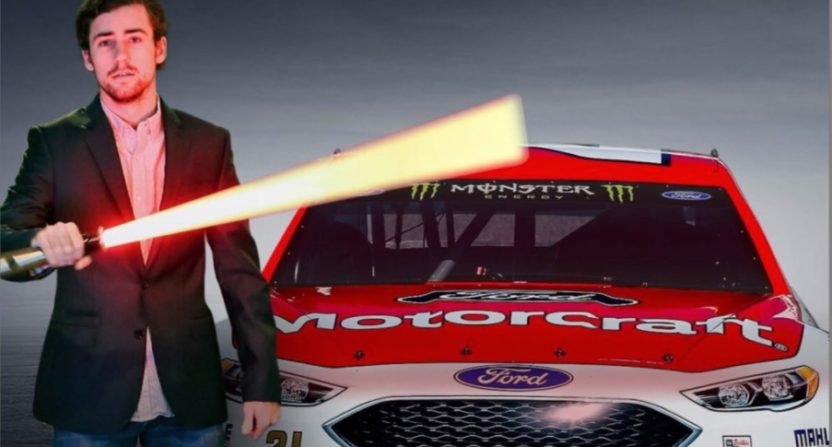 Ryan Blaney is one of the rising stars of NASCAR. The 23-year-old with unlimited potential was knocking on the door for his first win all year long and was able to get it together in a very popular win for the Wood Brothers at Pocono this past June.

That win got Blaney into the Monster Energy NASCAR Cup Series Playoffs, where he has advanced into the Round of 12. With just seven races left, Blaney would love to win a MENCS Championship — not only for him, but for the legendary Wood Brothers, who have never won a championship.

But if there’s one thing Ryan Blaney loves when he’s off the track, it’s Star Wars. The superfan loves the franchise and loves talking about Star Wars. Blaney got to meet Daisy Ridley (Rey) and even went through the entire history of Star Wars while on the road. Blaney is also a spokesperson for Star Wars Battlefront II which comes out on PS4, Xbox One and PC on Nov. 17.

As someone who is just starting to get into the Star Wars franchise, I wanted to talk to an expert and get their thoughts of how to get into it. So I went to Dover and met Ryan Blaney to ask how he became a fan and to get his thoughts on George Lucas constantly tweaking his previous creations.

Phillip Bupp: How did you get to be a Star Wars fan?

Ryan Blaney: Hmm, I don’t know. My parents and my family were never really a fan of them. When I saw the first one, Episode I Phantom Menace, that came out when I was 6 or 7. I think that time was you’re at that age where you’re just figuring out what you like. And when I saw the first one, I thought it was pretty cool and it kind of stuck with me. So I just saw it as a little kid and thought it was the right time and I enjoyed it and it’s been neat to keep enjoying it. I’m 23 now and that’s been pretty cool. I like the storylines in it and I like that other world. So yeah, I saw it and stuck with it.

PB: Have you gotten anyone in the garage to become a Star Wars fan because of you?

PB: I really wanted to interview you about Star Wars because I am just now getting into Star Wars. I didn’t start watching until I was 27 and that was a couple years ago so I’m starting a bit later. Now I’ve heard from many people about different ways to watch the franchise for the first time. Either, I’ve been told to skip the prequels or watch the first six in a certain order and everything else. What would you say would be the best way for a first timer to watch Star Wars?

Blaney: The way I saw it, because I was young and I saw Episode I, I went I, II, III and then I watched the originals. So I guess you could say I watched them in [chronological] order. And other people have different opinions whether you should watch the originals first and then the prequels. I don’t really think there’s a wrong way to seeing them, it’s just whatever you want to do.

But I guess if there is a wrong way you could see them, it would be if you kinda jumped episodes. Either watch IV, V, VI and then I, II, III or go from I all the way to VI, so whichever is up to your preference.

PB: Yeah, I still need to watch the prequels, those are the only ones I haven’t seen yet. I’ve seen everything else.

Blaney: I think you gotta tweak things. A part of me wants it, [along with] a lot of people like it to just leave it. Everybody tweaks things the way that somebody wants to do their movies. That’s their thought, that’s their movies. If other people think they can do it better, then make your own movie [laughter]. But I don’t mind tweaking things, I think it’s kinda cool. And whatever he wants to do, I’m along for the ride regardless really.

PB: George loves racing, he’s a huge racing fan, would you want to give him a ride in a stock car someday?

Blaney: Oh yeah, just call me up. We’ll go out and have some fun [laughter]. Yeah, I’ve heard his a big racing fan and loves cars in general. I don’t know if he’s ever been to a NASCAR race…

PB: I’ve seen him at a couple F1 races, he seems to go to Circuit of the Americas and Monaco.

Blaney: Yeah, who knows — maybe we can get him out one time. But yeah, I’d take him out for a ride for sure.

PB: If Disney were to call you about appearing in a future movie, what role would you want to have?

Blaney: I don’t know. You know, they’re coming out with this new Han [Solo] movie that I think is going to be pretty cool. I know I wouldn’t want to be Han because that’s too big of a character to play [laughter]. I think I’d play one of his buddies. Something where you’re not in the whole movie, you’re just in a little bit. But I think just to be a part of it.

Blaney: Yeah, I don’t want a huge role because I’m not an actor, I’d ruin the whole thing [laughter]. But I would like to just be a part of it, just to say you were on set of production for a few days of a Star Wars film. I think that would be pretty neat.

PB: Now of all the movies, which one’s your favorite?

Blaney: Honestly, really because it’s the first one I saw, Episode I is my favorite because it got me hooked on Star Wars. Darth Maul is probably my favorite character of the whole franchise. So it’ll go Phantom Menace first, even though there’s some things I don’t like about it. And then I like Empire [Strikes Back], that’s easily number two. Just Phantom Menace because it’s the first one I saw as a kid and it’ll always be special to me. 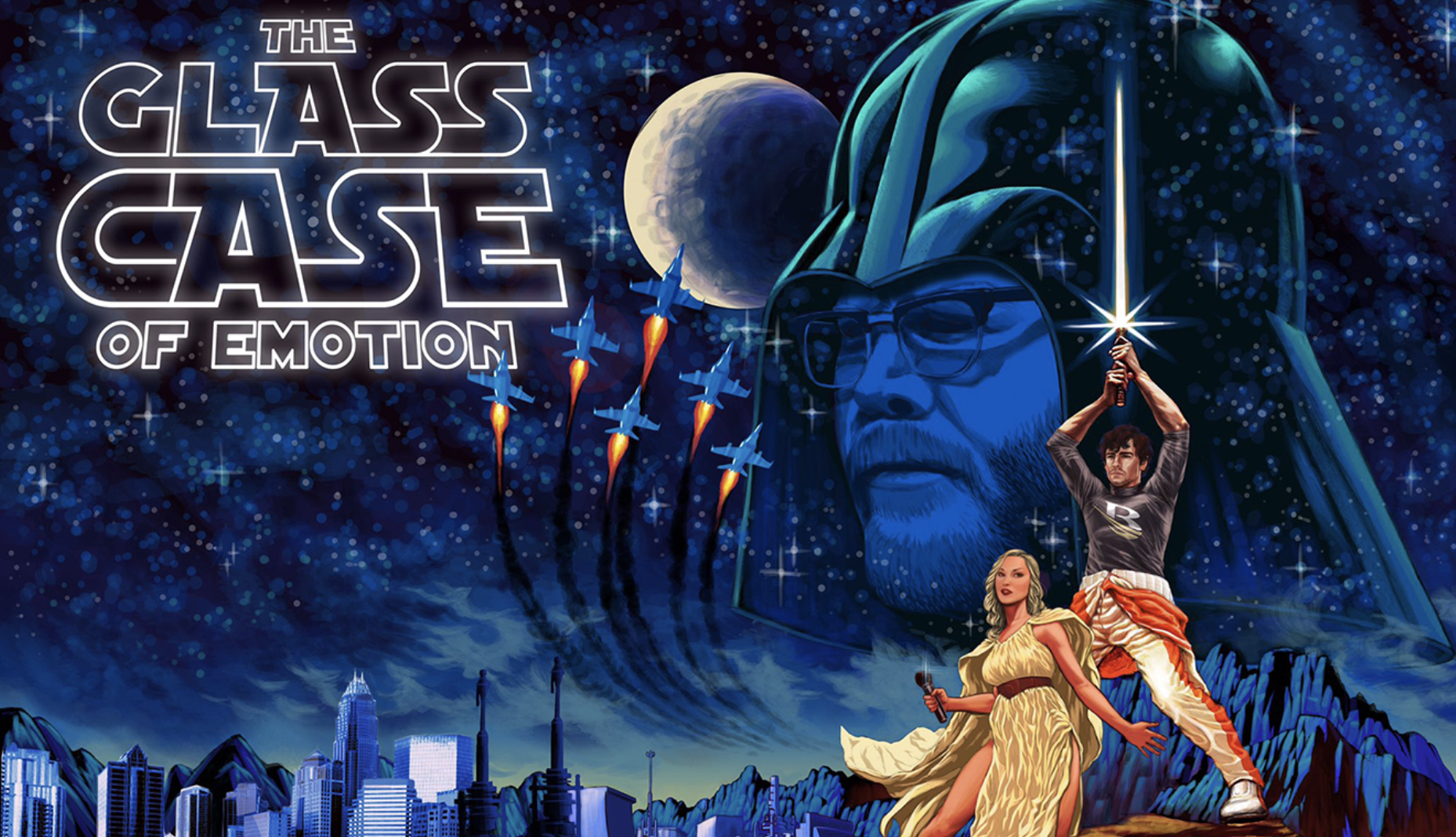 PB: A little bit of a departure from Star Wars, I was listening to your podcast [Glass Case of Emotion] to and from the track to the hotel this weekend. And I gotta say, I wasn’t expecting [to hear what I heard] but I loved it.

PB: I loved it because it wasn’t a typical “talking about the race” kind of podcast. You talk about life and things outside the track. So it was great to show your personality. If one of your fans were to come upon your podcast and never heard of it, don’t know what it’s about, etc., what would you tell them Glass Case of Emotion is about?

Blaney: Yeah, that’s something we started the beginning of the year and we’ve been doing it every week since the Daytona 500. We’ve been doing it for a long time, a lot of weeks. It’s myself and Kim Coon who is an MRN [radio] reporter and Chuck Bush who works at NASCAR. We do it at the NASCAR Hall of Fame in Charlotte. And so the premise of this podcast I wanted to do, when I initially came up with it with NASCAR, was we talk a little bit about racing which fans want to hear. But it’s also about personal stuff away from the track.

We’ve had a lot of drivers on it, we’ve been able to get [Dale Earnhardt] Jr. on it and Jeff Gordon’s been on it before. And a handful of others which has been a lot of fun to where it’s not like an interview with them. Myself and every other driver don’t have enough of sit-down interviews talking something other than racing. That’s why I like these interviews because we talk about personal stuff away from the racetrack.

PB: And I love this because, you can get all the racing stuff on ESPN or NASCAR.com and all that. I like to talk about other things as well.

Blaney: Fans also wanna hear what goes on when we’re not in our fire suit and away from the racetrack. And honestly, our personalities come out a lot more when we’re not here [at the racetrack]. Because this is our job, this is what we do. We have to be serious to an extent and we don’t really have time to goof off. And when we have the podcast, they can come and relax and just talk for a half hour and not really have it feel like an interview, it’s just your buddies talking.

So that was the main premise but we talk about, I’ll see something on Twitter that I’ll put in my notes and then we’ll talk about it. There’s a lot of explicit language in it and I think that was a big kicker. We don’t really want to censor ourselves too much because we do a lot of that on the weekends.

PB: Well yeah, and I mean that might be who you are.

Blaney: Yeah, that’s who everybody is. There’s really only a couple things we don’t touch on, which is religion and politics and that’s because it’s a whole other thing and you can get into hot water. Everything else, it’s been a lot of fun to do and we’ve had a lot of guests on there and we want to keep it growing and see all the fans react to it and enjoy it but if you want a laugh on your drive to work or drive home from work, I would encourage you to listen to it. I enjoy listening to parts of it, I have a lot of fun and we laugh a bunch during the podcast.