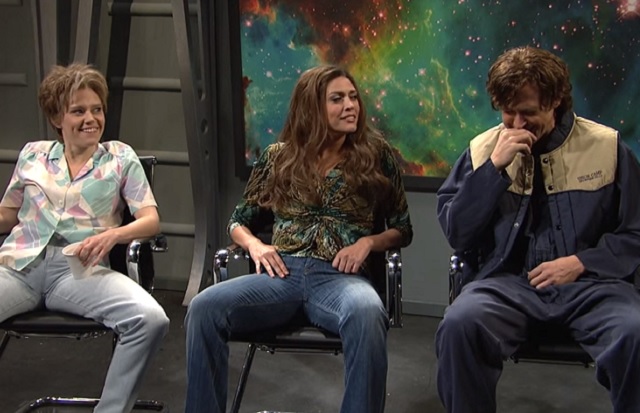 One of the unofficial traditions at Saturday Night Live is breaking, which is unintentionally breaking character, usually by cracking a smile or laughing in the middle of a sketch. It has been a part of SNL from the very beginning. Adam Sandler and Andy Samberg even used it as the basis for the digital short, “That’s When You Break,” at the SNL40 show earlier this year.

During the Dec. 4 episode of SNL, host Ryan Gosling spent most of the show trying to keep a straight face. It didn’t help that in his first sketch, “Close Encounter,” Kate McKinnon gives a hilarious performance as a woman who had a vastly different alien abduction experience from her friends. Gosling isn’t the first host to break during an SNL sketch and he won’t be the last. Here are 10 other sketches that made the host (and some cast members) break.

Candice Bergen – “Extremely Stupid” (Season 2, Dec. 1976)
Bergen hosted SNL three times during its first two seasons, and it was during her third appearance that this classic sketch appeared. Bergen mistakenly calls Gilda Radner “Fern,” which was Bergen’s character’s name, and completely loses it for the remainder of the sketch.

Mr. T and Hulk Hogan – “Fernando’s Hideaway” (Season 10, March 1985)
With the first Wrestlemania set to take place the next day at Madison Square Garden, SNL brought in Mr. T and Hulk Hogan to host in place of the originally scheduled host, Steve Landesberg, who was sick. Most of this episode is rough to watch, and so is this sketch, until Fernando (Billy Crystal) breaks both Mr. T and Hogan.

Michael Jordan – “Daily Affirmation with Stuart Smalley” (Season 17, Sept. 1991)
Jordan was gearing up to defend his first NBA title when he hosted the season premiere of season 17. While Jordan doesn’t completely lose all control, a smirk does appear when Smalley (Al Franken) asks Jordan to look into a mirror and recite a “daily affirmation.”

Christina Applegate – “Matt Foley: Motivational Speaker” (Season 18, May 1993)
David Spade and Applegate spend most of the first appearance of Matt Foley (Chris Farley), who was created by Bob Odenkirk when he and Farley were with Second City, covering their faces at the gesticulations of Farley. Foley would appear seven more times on SNL before the death of Farley in 1997.

Sean Hayes – “Jeffrey’s” (Season 26, Feb. 2001)
The Jimmy Fallon portion of this post starts with this sketch about the luxury clothing store, with Horatio Sanz starting the laughter before Will Ferrell and his tiny cell phone lead to a total meltdown from Hayes and Fallon.

Justin Timberlake – “The Barry Gibb Talk Show” (Season 29, Oct. 2003)
The first sketch featuring Barry Gibb (Fallon) and his brother, Robin (Timberlake), as talk show hosts is probably most memorable because Timberlake can barely keep a straight face throughout most of the sketch.

Lindsay Lohan – “Debbie Downer” (Season 29, May 2004)
Maybe the all-time greatest breaking sketch in SNL history. In the years since this skit aired the phrase “Debbie Downer,” it’s become a slang term for anyone who kills the mood. During this first appearance of Debbie, it’s Rachel Dratch herself who starts the giggling when she flubs a line and it’s all downhill from there.

Jonah Hill – “J-Pop Talk Show” (Season 37, March 2012)
Hill somehow makes it through most of this absurd sketch about a couple of students at Michigan State who are obsessed with Japanese culture, but he loses it towards the end and never really recovers.

Jamie Foxx – “Maine Justice” (Season 38, Dec. 2012)
“Maine Justice” is one of the weirdest, greatest sketches of the past few seasons. Jason Sudeikis plays a Southern judge in Maine, which may also be his wannabe astronaut from the classic “Potato Chip” sketch, and gets his bailiff (Foxx) to break with the phrase “ass fire” during sentencing.

Dakota Johnson – “Worf M.D.” (Season 40, Feb. 2015)
Kenan Thompson is a doctor who is called away from a Star Trek convention dressed as Worf to attempt to save a dying patient (Taran Killam). It is kind of unclear if Johnson is actually breaking, but the tell-tale hand in the face gives it away.

Saturday Night Live returns on Dec. 12 with host Chris Hemsworth and musical guest Chance the Rapper. Will Thor keep it together?