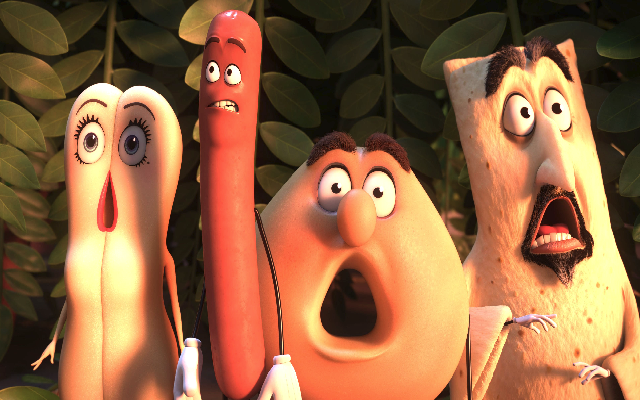 Could an extremely disappointing summer movie season end up being rescued by an animated film featuring a hot dog (voiced by Seth Rogen) that very much wants to get inside a bun (voiced by Kristen Wiig)? With two weekends remaining in August, maybe there’s still time for that.

At the very least, Sausage Party brings some very welcome laughs to the theater, some surprising joy to counteract all the face-palming letdowns that have filled movie theaters this summer. (Is that overstating things a bit? I was a bit harsher on Star Trek Beyond and Jason Bourne than some critics and fans.) This movie will cause you to facepalm for very different reasons.

These days, it feels rare for a comedy to not give away all its best gags during trailers. But even if you knew going in that Sausage Party was an adult-themed animated film that would make jokes about sex and race, you likely have no idea just how far this movie is willing to go with its humor. And it’s not just looking to get laughs from bawdy humor depicted by animated food items. The script (credited to four writers, including Rogen and Evan Goldberg) has some thought-provoking things to say about faith and religion, and how beliefs can so often cause division.

That sounds preachy and like a forced attempt to make something meaningful out of a movie that’s meant to be a raunchy satire of Pixar films and children’s cartoons like VeggieTales. But Sausage Party doesn’t get too caught up in any message it might be trying to convey at least not without forgetting that the movie’s main purpose is to make us laugh, even at stuff we know is terribly wrong and can’t believe the filmmakers got away with.

As you know if you’ve seen the trailers and commercials (one of which is embedded above), Sausage Party focuses largely on Frank (Rogen), a hot dog that really wants nothing more than to get inside the bun of his life, Brenda (Wiig). It’s their destiny to be together, unless the fates were so cruel as to separate them, forcing another package of sausages and buns to get together. But the ultimate goal of all the food in the Shopwell’s supermarket is to go to “The Great Beyond,” to be picked up by the giants they refer to as gods and be taken away to a better life where they’ll be loved and cherished.

However, the happy delusion all of the food items live under is shattered when a jar of honey mustard (Danny McBride) that was purchased is returned to the store and tells all of his fellow groceries what he’s seen outside the store. It’s a world of horror, one in which the food is sliced, boiled, sizzled, torn apart and eaten, subjecting these poor souls to a terrifyingly painful end. There is no happiness in The Great Beyond, only pain and suffering.

Frank isn’t willing to believe the terrible truth, not at least until he can get some kind of confirmation from someone besides the honey mustard jar. He’s told that Firewater (Bill Hader), a bottle of Native American-style booze, has answers for him. As Frank and Brenda set out on their quest, a few new friends tag along — notably Bagel (Edward Norton, doing his best Woody Allen impression) and Lavash (David Krumholtz). They also get on the bad side of a bottle of douche (Nick Kroll), who thinks Frank tried to prevent him from finding happiness on the other side.

Once he finally finds Firewater — along with fellow non-perishables Grits (Craig Robinson) and Twink (Scott Underwood) — and smokes some herb (this is a Seth Rogen movie, after all), Frank learns the truth. The honey mustard was telling the truth. The gods are anything but. They intend to destroy all the food and will keep doing so to feed their insatiable appetites. See how much clearer everything can become when you open your mind (with the help of some herbal assistance)?

With everything they’ve come to believe now exposed as a lie, Frank feels he has to share the truth with the rest of the supermarket. Naturally, very few want to believe that what they’ve believed throughout their entire lives, what forms the basis of the reason they wake up every morning and gets them through daily existence, is a fabrication. Furthermore, they resent having their beliefs questioned and mocked by someone who claims to know better and have all the answers.

Before the story gets to that point, however, there are plenty of hijinks inside and outside the supermarket. Bagel and Lavash bicker constantly, until they eventually realize that they have a common friend in hummus and reside on the same side of the store. (Lavash also resents being told that his destiny of 77 bottles of virgin olive oil pouring all over his flaps in the next life isn’t a reality.) The douche finds other liquids to fill his bottle. And after doing some meth, a human discovers there’s more to his junk food than what he thought he brought home from the grocery store.

There are some people who could be offended by what they see — or hear, really — in Sausage Party. To a large extent, the movie makes fun of ethnic humor and political correctness, absolutely embracing some racial stereotypes (i.e., the Grits character and bottles of soy sauce with Asian accents) for the sake of some laughs. But those differences, even as exaggerated as they might be here, need to be shown in order to be acknowledged. Their foolishness needs to be exposed for maximum humor.

Ultimately, you won’t believe how far directors Greg Vernon and Conrad Vernon push the edge, helped along by Rogen and Goldberg, who surely relished the opportunity to really cut loose with humor they couldn’t have gotten away with in a conventional live-action comedy. What would happen if you let Seth Rogen and Evan Goldberg, along with many of their best comedy friends, get a crack at a Pixar movie? Sausage Party is probably the closest we’ll ever get. (It’s certainly as close as Disney would ever let this kind of humor near one of its animated properties.)

Don’t dismiss the cartoon delivery system. This is as funny and smart a movie as you’ll see all year, and it’s certainly one of the best films of the summer, coming at a time when it was becoming difficult to believe that blockbuster entertainment could actually be good. You may think differently about the food you eat after watching this, however. It’s probably better to not think about it and just bite down.