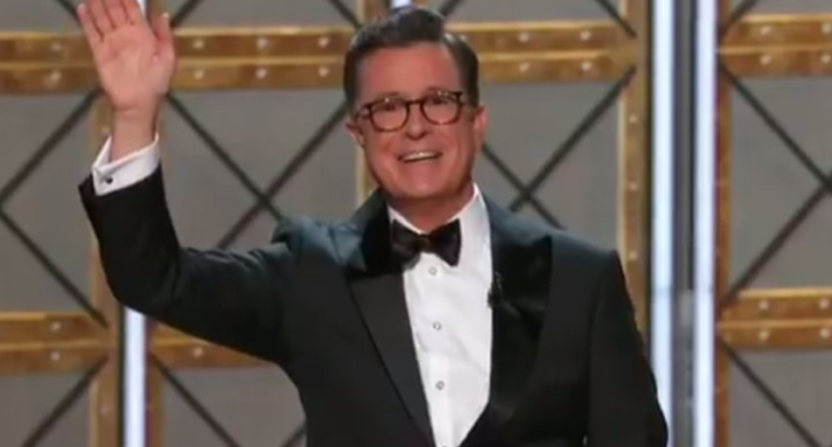 The 2017 Emmy Awards kind of snuck in under the radar with a whole lot else going on Sunday night. But the show honoring the best in primetime television has come and gone, bringing with it all the good Trump jokes you could handle.

But seriously, this year’s Emmys ceremony was a solid, relatively controversy-free night. That said, the show still had some great and notable moments. Here are five things that stood out from Sunday night’s Emmy celebrations.

Colbert also appeared in a great Westworld spoof, where after malfunctioning on-stage with Emmy cliches, he checked in (naked) with Jeffrey Wright. Thankfully, with the help of Titus Burgess, he was reprogrammed to get back on track.

Donald Glover is incredibly versatile: He can act, write, direct, sing and rap. He can do drama, he can do comedy. Essentially, he can do it all.

So it was gratifying to see him win for Best Directing in a Comedy Series for Atlanta and Best Actor in a Comedy Series. Glover’s voice on Atlanta is both unique and much-needed. To see him gather further acclaim for the role and his behind-the-scenes work is fantastic. Hopefully, this is the start of a nice winning streak for the talented actor.

Now free from the job from hell as the White House Press Secretary for the Trump administration, Sean Spicer continued his recent media rounds, making a surprising appearance on stage with Colbert, mocking Trump’s crowd size remarks. Spicer was very game, making it less cringey than it could have been.

Even if you’re anti-Spicer, you have to admit it was somewhat jaw-dropping. The moment produced a very meme-able reaction, from Veep’s Anna Chlumsky.

Anna Chlumsky’s face when Sean Spicer walked out was all of us! #Emmys pic.twitter.com/3wFQKCultf

Although it’s worth remembering why Spicer became infamous in the first place.

Let's not let people like Spicer and Mooch become Cute Things. They were lying mouthpieces, utter disgraces. They should be shunned forever.

Ann Dowd: “I’ve been acting for a long time, that this should happen now, I don’t have the words” https://t.co/iC652uV3AQ #Emmys pic.twitter.com/44YPQcb8oM

Ann Dowd has long been a character actress who dominated the small roles she performed in — seriously, she appeared on Law & Order SVU three times in three separate roles. Her IMDB is filled with network police procedural appearances. Dowd broke out in HBO’s The Leftovers, as Patti Levin, the leader of the Guilty Remnant cult. Dowd followed that up with a lead role on The Handmaid’s Tale. Fast-forward to Sunday night, she was twice nominated tonight for Best Supporting Actress for The Handmaid’s Tale and Guest Actress in a Drama for The Leftovers.

So winning on Sunday for The Handmaid’s Tale felt like all those small roles finally paying off. At 61, Dowd won her first Emmy and if she continues her wonderful performances, it won’t be her last.

Note: Shoutout to The Handmaid’s Tale for winning Best Drama – the show should thank Game of Thrones for not being eligible this season.

Great speeches all around

I can’t add much to this poignant speech. But congrats to Lena Waithe in becoming the first African American woman to win an award for Best Writing in a Comedy Series for her work on Master of None.

That was a great speech by Sterling K. Brown — and it would've continued to be great, had it been allowed to. #Emmys

Yes Sterling K. Brown! I've loved him in every role I've seen him in! Bravo! Awesome speech. They shouldn't have cut him off. #Emmys2017 pic.twitter.com/6AfsTXzdcv

The Emmys deserve praise for recognizing a talented, diverse group this year. Plenty of women and people of color won and that’s fricken’ great. For one night, it was easy to forget the industry is too often old, white and male.

Going directly from Aziz & Lena Waithe winning to Kumail presenting the next Emmy would have blown my mind as a kid. How awesome. ??

Did you want to hear the voices of Stewie, Brian, and Peter Griffin while hearing the announcement for Best Writing for a Limited Series? Well, that’s what you got! This might have worked in a comedy category, but considering Black Mirror won — yeah, it was off-putting and unexpected.

"You know what would be great? Robbing nominees of their dignity by having that Family Guy douche do voices over their names" #emmys2017