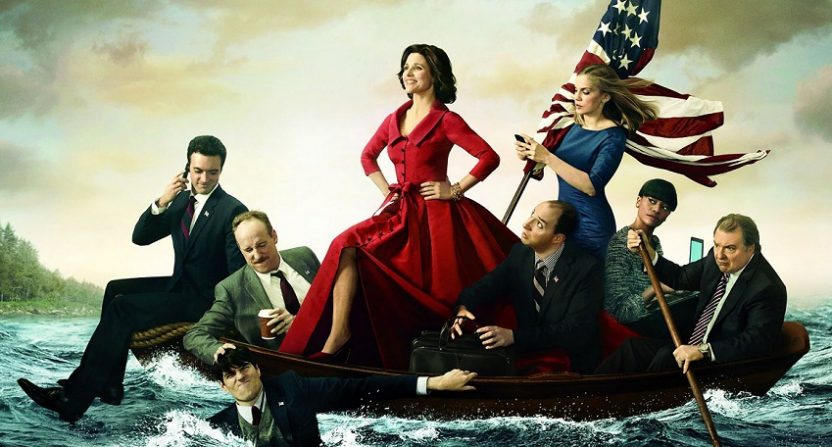 The award-winning HBO political satire Veep returns on Sunday, and with it comes a distinct change of scenery — for the fictional world of its characters, and the actual reality of its viewers.

While for its first five seasons, the comedy expertly portrayed Washington D.C.’s faults, it also layered on a level of absurdity that removed it enough from the real happenings within the nation’s capital. But as the Washington Post asked recently: What happens to the show’s satire when the world around it has almost become satirical itself?

Exhibit A, from just this week:

This feels like an Emmy winning episode to me.https://t.co/DU4o08Ot2P

Another show that’s previously preyed on political satire, South Park, was forced out of the game entirely because of the “stranger than fiction” nature of the current presidency.

So how does Veep proceed with all that’s going on around the writers and actors without it inherently influencing the show? And in an equally jarring shake-up, how does Selina Meyer (Julia Louis-Dreyfus) get on with her own life, now that she’s no longer anywhere near the White House?

Before Veep steps into this brave new world, it’s worthwhile to take a quick look back at the 10 best episodes so far. For all we know, it’s truly the last we’ll see of these characters in their previous settings (and dynamics).

Sue Wilson’s (portrayed by Sufe Bradshaw) deadpan humor is one of Veep‘s best and most consistent nuances, and it gets to stand center stage in this episode during a round of questioning with a member of Congress. The early Dan (Red Scott) vs. Gary (Tony Hale) battles to be Selina’s right hand were some of the show’s most slapstick and enjoyable comedy too, and this episode had plenty of the two staffers bickering to the point of distraction. It’s not the most traditional episode the show’s had, but that works to its advantage on numerous occasions (such as this one).

At the time, Veep was still figuring out what it was as a show, but this episode went to great lengths to establish the lengths it would go to for awkwardness and laughter. You see everything about Selina all in one place during “Frozen Yoghurt” — her ambition, anxiety, pride, slight social discomfort and much more. She briefly believes herself to be ascending to the presidency, only to be relegated to a frozen yogurt shop and a bout of digestive issues by the evening. We also get our first major glimpses of Leon (Brian Huskey) at work, which has its highlights over the run of the show.

Another episode that watches Selina, expertly brought to life as a real person by Louis-Dreyfus, run the entire range of human emotion in a matter of minutes or seconds. Her gaffes are numerous and increasingly public, but the highest comedy of all (maybe of the entire show) comes from the much-lauded bathroom scene between Selina and Gary. Given the lead-up to this moment, Selina’s ability to comprehend being president is refreshingly subdued and in awe of the office. But when Gary’s nose starts bleeding uncontrollably, the two end up laughing themselves to tears on the floor. “Crate” is top 10 for those fleeting moments alone.

Testing each character’s reactions under pressure is a fun exercise, and the actors portraying the various White House staffers do not disappoint. Obviously Dan and Amy (Anna Chlumsky) are their own brand of conniving and vindictive, yet cool(-ish) under pressure. But the less composed characters really take the cake. Gary unravels in seconds, while Mike (Matt Walsh) provides a case study in his overall body of incompetence. This is also among the best displays for the Richard (Sam Richardson) and Jonah (Timothy Simons) dynamic, as the two chase each other further and further into incriminating territory. The continued aftermath of Jonah’s groping incident also makes a welcome appearance in the courtroom.

While Richard-Jonah is fun, and gets better as the show goes on, the Dan-Jonah interplay has always been a cornerstone of Veep and its various dysfunctional branches of Selina’s office. Though “Data” ultimately fires Dan and allows him to spin through some soul-searching (quickly, really), his work with Jonah around Teddy’s groping is an entertaining sidebar that sets the stage for later episodes (like “Testimony”). Dan also shows numerous ways to be terrible at working in politics, but none are more rewarding than the fireworks task he hands over to Jonah and Richard.

Selina walking through a glass door metaphor is the sort of thing that you’d expect the show to do, yet they still pull it off with aplomb here. The same goes for the rest of “Running,” which portrays Selina as the hard-headed and desperate politician we know she is, while still making us like her for planning a run for president. While Selina’s the centerpiece of the episode, each role player gets their turn at the wheel to raise the bar on their own nonsensical behavior as well. Jokes about Mike’s boat will always elicit a laugh here.

The utter stupidity of every member of Selina’s staff is on full display in this episode, but that’s not really the main focus. Instead, it’s the moving parts — from community organizer Alicia Bryce, to the standing arrangement, to Selina’s dress choice — around her campaign announcement that truly star. Kent (Gary Cole’s) delivery of the standing arrangement is entertaining in his hands, but would be exasperating if presented by Dan or Amy. And of course, Selina’s angry and vicious reactions to the similar outfit Catherine (Sarah Sutherland) has on is equal parts entertaining and sad — a common theme of their relationship.

“Mother” isn’t laugh-out-loud funny the way most of Veep typically carries on, but it still grabs those choice moments very well. Instead, it’s probably the best character study of the motivations behind Selina, and why she is the way she is, that we see in the entire show’s run. The emotional outburst fits in well with her mother’s funeral, but it’s largely the epitome of her drown heartfelt emotions ethos finally coming to roost as she deals with the undesirable election outcome. For some, perhaps it’s the first time you ever thought Selina Meyer really deserved something in this (fictional) world.

The stakes have never really higher on the show than they were in this episode, and yet, the cast managed to make light of most of the mock election night, even as Selina was about to concede (and then walked it back when the news of a tie trickled in). Amy’s ability to put her tail between her legs and come back to Selina’s side is a nice moment in an episode with a few of them. But that’s the only one that truly stands above the angry outbursts and reactions to Mike, Kent and the rest of the support team really being ill-prepared for the possibility of a loss.

Personally, I’m a fan of Veep at its most deplorable, which is why this episode takes the top spot. In “Congressional Ball,” Selina eviscerates most of her opponents with a barrage of one-liners and profanity that could make anyone blush. For Louis-Dreyfus, this episode was a tour de force; the full display of what she can do as one outrageously talented and funny actress. Gary has his key moments as well (especially walking in on Selina and Tom, played by Hugh Laurie). But the scene that will stick with me for a long time is Selina’s complete and utter tear-down of Congresswoman Nickerson (Stephnie Weir). “Super duper, trooper!”